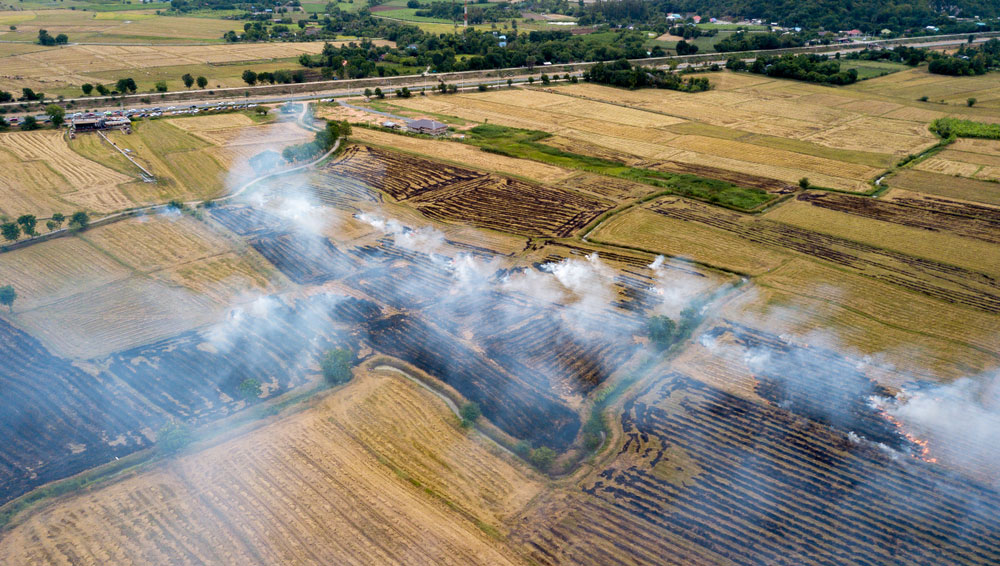 Stubble burning continues for many reasons, in spite of an earlier order by the Supreme Court to offer seeders at subsidized rates. Now that the court has directed that farmers temporarily be given machines for free, the question of implementation must take precedence.
(Shutterstock)
The Editorial Board   |     |   Published 13.11.19, 08:16 PM

With spaces for dissent rapidly shrinking in India, it is not often that citizens are able to express their disapproval of governmental inaction or oppression without fear of punishment. It was thus heartening when the Supreme Court, in a recent order, upheld the rights of citizens to demand accountability from their elected representatives. This was especially important as it pertained directly to matters involving public health and labour. The apex court called a spade a spade. Not only did it tell the chief secretaries of Punjab, Haryana and Uttar Pradesh that they had not done enough to prevent stubble burning — a significant contributor to the persisting pollution crisis in Delhi and the national capital region — but also made it clear that a government that cannot do the work required to address the problems of the people is not fit to be in power. Moreover, it asked the states to give paddy farmers who have not burnt stubble on their fields a cash incentive of Rs 100 per quintal of crop as well as free machines to ‘small and marginal’ farmers to deal with crop residue.

The court’s emphasis on governmental accountability is welcome, as it defended a key facet of a healthy democracy. In its directive for cash incentives to farmers, it has identified a portion of a larger, layered problem. The solution to the latter must be devised in a holistic manner. For one, the prevailing model of Indian agriculture is focused mostly on enhancing productivity without adequate attention being paid to its consequences, such as waste generation. If the regenerative nature of agriculture — the notion that even agricultural waste has value and can be used in a manner that benefits both the environment and economic needs — is ignored, then it will not be reflected in policy. Stubble burning continues for many reasons, in spite of an earlier order by the Supreme Court to offer machinery at subsidized rates. Now that the court has directed that farmers temporarily be given machines for free, the question of implementation must take precedence. Even more important, though, is the need for re-imagining ways in which agricultural waste itself can be incentivized. The chief minister of Chhattisgarh said, for instance, that 21 million tonnes of high-grade organic fertilizer can be obtained from 35 million tonnes of stubble. Alternative models of composting and harvesting do exist; what is required is political will to invest in these methods, and to sensitize farmers about how such approaches can help mitigate economic hardship as well as protect the environment.