Sri Lanka must decide what to do with the hangman's rope

The island nation has a historic choice: to be in sync with modern thinking, or, recoil atavistically to ‘eye for an eye’ 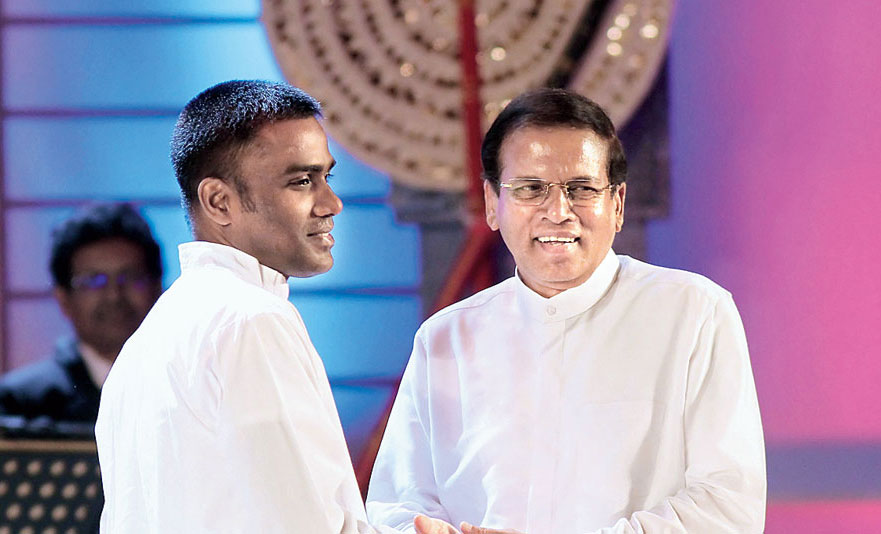 File picture of Sri Lankan president Maithripala Sirisena (right) holding the hands of a former Tamil Tiger insurgent, Sivaraja Jenivan, after pardoning him during a function to mark the first anniversary of his election to the prime minister's office in Colombo on January 8, 2016
(AP)
Gopalkrishna Gandhi   |     |   Published 01.03.19, 04:08 AM

Not the first but the fourth prime minister of Ceylon and occupying that office for just over three years, Solomon West Ridgeway Dias Bandaranaike remains modern Sri Lanka’s most iconic politician.

The island state did not see, in his tenure, anything like the ethnic conflicts that his widow and later his daughter were to be embroiled in, when they moved into political power. His prime ministership did not see any dramatic moves in the world of diplomacy or any political upheavals. And yet, ‘SWRD’ towered — and towers — over all political figures in Sri Lanka’s history for the reason that he brought to it a completely distinctive political style, blending as never before Western-style liberal perspectives and Eastern-style ethnic predispositions.

James Manor’s riveting biography of the man (The Expedient Utopian, 1989) tells us of Bandaranaike’s very Western, Oxford-educated mind discovering the pulsations — and opportunities — of ethnic politics. “You know,” he said in 1956, smiling broadly, “I have never found anything to excite the people in quite the way this language issue does.” That was the year SWRD became prime minister.

His makeover from Western-style clothes to the Lankan sarong and long tunic, from an English-dominated political vocabulary to Sinhala were the more obvious forms of that. They marked a tectonic shift in the country’s political climate and were to make its seasons thereafter for all time. With his inauguration, the highly Anglicized and British-mannered externals and internals of political leadership became history. Ceylon was to become Sri Lanka a little later but with his inauguration, Buddhism became central to his country’s polity and Buddhist reliquaries became a palladium of the State. His Sri Lanka Freedom Party was and was seen to be a party of Buddhist beliefs.

It is moot whether SWRD’s piloting of the Capital Punishment Act of 1958, which suspended the death penalty, came from his liberalism or from his Buddhism. Be that as it may, he put the hangman out of business. But for a while only.

This year marks the 60th anniversary of SWRD’s assassination. Receiving four shots , he could still talk, even jest. “I am not bad,” he said. And, saying “I have always been known for making long speeches”, dictated from his hospital bed a message to the nation: “A foolish man dressed in the robes of a bhikkhu fired some shots at me in my bungalow this morning. I appeal to all concerned to show compassion to this man and not to try to wreak vengeance on him.” He was to die the next day.

As was the suspension of capital punishment. Within a week of the assassination, a gazette extraordinary reintroduced the death penalty. It must be said to the great credit of that country’s maturity and poise that there were protests against the revival of the penalty and it was to be diluted and kept in abeyance in the years that followed the hanging of SWRD’s assassin, Somarama Thero.

Fast forwarding the narrative to 2015, president of Sri Lanka since 2015, the ‘SLFP-er’, Maithripala Sirisena, is a survivor. Not just politically, but physically. I refer to his surviving not one, not two, but three assassination attempts by cadres of the Liberation Tigers of Tamil Eelam. Sirisena could have died in any of them. He has survived. In Sri Lankan Buddhist mode, he might attribute this to the blessings of the Tisarana, the Triple Refuges — the Buddha, the Sangha and the Dhamma. Others may say, simply but honestly, he has been lucky, ‘God-all lucky’.

Along with a large gathering in Colombo on January 8, 2016, celebrating the first anniversary of his installation in office (and that of the government of national unity), I witnessed Sirisena doing something that was ineffably Buddhist. He did this in a personal, individual sense, and also completely ‘official’, in exercise of his presidential prerogatives. He pardoned that day, officially and publicly, Sivaraja Jenivan, a former LTTE cadre, who had tried to kill Sirisena over 10 years earlier (picture). When he was a minister in the cabinet of the former president, Chandrika Bandaranaike, Sirisena was travelling on a road near Polonnaruwa, site of the famously serene ‘Buddha in repose’. A claymore mine planted by Sivaraja failed to get its target. Sivaraja was caught, tried and sentenced to imprisonment, I am not sure for how long. At that anniversary event, Sirisena had Sivaraja invited to the stage to meet, face-to-face, his once would-be target, now the president of Sri Lanka. The sight of Sivaraja bending to touch the president’s feet, then rising to shake the president’s outstretched hand, and walk away, free, is one I cannot forget.

As a private individual, he could have ‘forgiven’ him in his mind. Kshamavirasyabhushanam, forgiveness is an ornament of the brave. He could not have pardoned him and set him free. But as president, he could. And did.

Truly Buddhist, I said to myself. So very Asokan.

And so in tune with the Sri Lankan State’s having put in cold storage for 42 years its power to execute those sentenced to death. This moratorium has gained for the ‘little island nation’ a prestige in the growing world of abolitionist countries, 106 in number, that have stopped de jure the death penalty altogether and those countries, 28 in number, that have abolished it in practice. Sri Lanka has had a valuational edge, in terms of its penological philosophy, that places it above ‘big’ retentionist nations like China, Japan, South Korea, the United States of America, Saudi Arabia and Iran.

The island nation has been, rightly, concerned with the havoc that drugs, their being smuggled in, their peddling, their spread can cause. And aware too of the global connect between drugs and guns and terrorism. It has, therefore, long provided for a sentence of death for drug offences, among others like murder. But for the last four decades and more has not implemented it — driven ‘somewhere’ in its collective consciousness by the Buddhist doctrine of ahimsa. When after the assassination of a high court judge in 2004 the then president, Chandrika Bandaranaike, sought to end the moratorium, there were widespread protests and she let the moratorium stay.

Those who believe in the deterrent capacity of the death sentence have found Sri Lanka’s moratorium naïve. Those who believe the death sentence does nothing to deter any crime have found it civilized. The first set will laud Sirisena’s decision, announced on February 6, 2019, to revive executions for drug offences. They will, in fact, hope and expect that this will lead to a return to hangings per se. There are, as of 2015, 1,116 cases on Sri Lanka’s ‘death row’.

If the moratorium is lifted now, will drug offences plummet? Will other crimes that attract the death penalty in Sri Lanka be checked? World penological experience would say, definitely not. Only a machismo spirit will have been requited. Sri Lanka has a historic choice: to be in sync with SWRD’s modern and Buddhist spirit as well as with modern thinking and view crime and punishment differently from the Middle Ages. Or, recoil atavistically to ‘eye for an eye’.

Will, in this 60th anniversary of SWRD’s deathbed appeal, the president, Sirisena, reflect on the grace of his own 2016 action, and keep the hangman’s rope in the museum of medieval vengeance?