A note of assurance

Indian inefficiency may be the saving of India 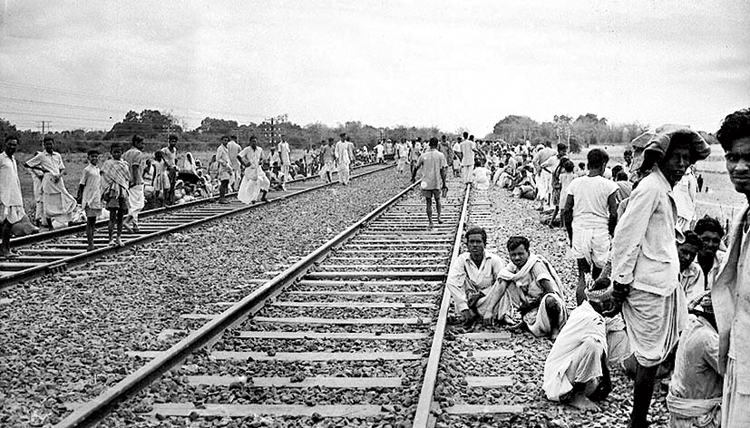 However duplicitous the Bharatiya Janata Party’s leaders may have been over the National Population Register, the National Register of Citizens and the rumoured National Register of Indian Citizens, they can only be complimented on the Citizenship (Amendment) Act. The measure is neither a betrayal of secularism, nor a threat to Indian Muslims. It may not be the last word in a dismal argument that has dragged on since before the first inter-dominion conference on minorities held in Writers’ Buildings in April 1948 but it does go some way towards assuring orphans of Partition that they have not been altogether abandoned.

Two images came to mind during the recent furious protests, alleged police brutality and tragic deaths. The first image was of a grizzled East Bengal Hindu peasant bundling his few meagre belongings to leave the refugee camp near Kalyani that had been his home during the Bangladesh war. Seeing the man’s reluctance to go to the promised land of communal bliss that had been a blood-drenched East Pakistan in December 1971, I asked whether he regarded himself as Indian or Bangladeshi. Without a moment’s pause, he shot back with the earthy shrewdness of his kind, “Consider me an Indian national resident in Bangladesh!” The second image is of the conference mentioned earlier when no contrived passion for secularism was allowed to obscure reality on the ground. Pakistan’s finance minister, Ghulam Muhammad, readily upheld India’s role as protector of Pakistan’s Hindus. “Mr Sri Prakasa looks after the interests of Hindus in Sindh,” he said of India’s first high commissioner to Pakistan. “My government gives him every facility to do so.” In consequence, Sri Prakasa’s house in Karachi was a “beehive of lots of people”.

Seven months after that conference, Surendranath Haldar, ex-chairman of Jessore municipality in East Pakistan, complained to Bidhan Chandra Roy that Hindus were being persecuted in his district. West Bengal’s chief minister promptly instructed India’s deputy high commissioner in Dhaka to take up the matter with the Jessore administration. Soon afterwards, Pakistan’s deputy high commissioner in Calcutta sought permission to visit Silchar in Assam to investigate charges of Muslims being evicted. The CAA’s opponents probably don’t know that India-Pakistan relations were always hostage to the plight of stranded minorities. Nor do they seem to know whether the enemy is the NPR, NRC, NRIC or CAA.

With one state after another slipping out if its control, a beleaguered BJP probably sees the CAA as a necessary sop to the Hindutva lobby. Middle class fears of competition and Mamata Banerjee’s spoiler’s role have reduced the potency of what could have been a powerful inducement in amputated Bengal. Nevertheless, the East Bengal Hindu hasn’t disappeared from the radar. Indian citizenship for all Hindus in Pakistan was mooted soon after Independence. Some proposed exchanging populations. A third suggestion was that East Pakistan should cede territory west of the Padma as a homeland for its unwanted Hindus. J.N. Mandal, one of Pakistan’s founding fathers, denounced the infamous Nehru-Liaquat Ali pact, which banned selling evacuee/enemy property as “not only unsatisfactory but absolutely hopeless” in securing the Hindu future. Syama Prasad Mookerjee and Kshitish Chandra Neogy quit Jawaharlal Nehru’s cabinet protesting against the ban which protected Indian Muslims but gave Pakistan an additional means of bullying and robbing a vulnerable minority. Mandal mentioned 200 to 300 Hindus whose properties were seized despite the Custodian of Evacuee Property certifying they were not evacuees.

This was not the only discrimination. Pranab Mukherjee contrasted Delhi’s niggardliness towards Bengali refugees with the generous cornucopia of land, houses, licences, grants, loans and jobs (to say nothing of the new city of Chandigarh) in the West. He might have added that the Centre even paid to send a Punjab evacuee family’s sons to India’s most famous boarding school. The worst victims of the dislocation, suffering and loss of moveable and immovable possessions were East Bengal peasants and fisherfolk of the Namashudra and Majhi castes. The new law’s promise of security for those who fled to India before 31 December 2014 applies to only 25,447 Hindus, 5,807 Sikhs, 55 Christians, two Buddhists and two Parsis, 31,313 souls in all. The CAA does however send a message of hope to 17 million Bangladeshi Hindus, 2.5 million Hindus still languishing in Pakistan and — surprisingly, since New Delhi has no residual obligations in a country that was not part of British India — a thousand in Afghanistan.

Even if they all become Indian citizens overnight, they cannot affect the rights of 200 million Indian Muslims who are part of the history, culture and very soil of this land. If knowing this, Indian Muslims still went on a rampage it was because of the wounds of criminalizing triple talaq, abrogation of Article 370 and the colossal injustice of the Ayodhya verdict. As for student unrest, young people are moved by the perceived threat to an ideal compounded by economic distress and dismay at what the prime minister’s crass utterances reveal of his ignorance of science and history. If the CAA reflects badly on the governments of India’s two neighbours, I have a sneaking suspicion that neither would be too unhappy to see the backs of their Hindus.

Some complain that by not including Pakistan’s persecuted Ahmadiya and Hazara Muslims, Sri Lanka’s Tamils (Hindu and Christian), Myanmar’s mainly Muslim Rohingyas and Tibetan Buddhists, the CAA betrays our secular Constitution. But Indian secularism is not an aggressive global mission. It means only that the State has no particular religious bias, and that all the religions in the country operate on an equal footing. It’s more an attitude, a state of mind, than an instrument of official propaganda. Britain’s is a secular society even though the Church of England is the official religion and the head of state is its “supreme governor”. A muted secularism has enabled India to allow 29,500 “hill country Tamils” (Malaiha, as they are called) fleeing the systemic violence that Sinhalese Buddhists began in 1983 to settle in Tamil Nadu without fanfare. Also, to provide asylum to 100,000 Tibetan Buddhists.

India has also always taken a quietly sympathetic stand vis-à-vis Hindus in Pakistan, tacitly acknowledging that the residual community — an unhappy legacy of Partition — is India’s moral if not legal responsibility. After all, they were all Indians once. And so, the Hindu lawyer or landowner escaping East Pakistan on what was called a “jungle passport” paid a bigger bribe to the Pakistani guards than to the Indians. The Custodian of Enemy Property told me after the 1971 war that it would be monstrous to demand documents for compensating Hindu peasants who had escaped. “A man has fled for his life in only the clothes he stands up in, he has left everything behind, and we should ask him for pattas?” he exclaimed in righteous outrage. There might have been fewer objections if tacit helpfulness had remained tacit.

People of a liberal bent might find being earmarked and identified, whether for the NPR, NRC or NRIC, irksome. However, all modern States store such information for social services, economic planning and other forms of tabulation. In theory, the information can be used to create a police State but given the lethargy that envelops life here, the danger doesn’t seem imminent. Our police might erupt in violence and vandalism and our generals shoot verbally from the hip but the Orwellian apocalypse demands discipline and a sense of purpose. Narendra Modi’s personalized letter to gas consumers indicates the opposite. My mother who had been dead 22 years got one, addressed to her bungalow which had been demolished 18 years earlier, her surname misspelt. Despite the fire and brimstone Modi breathes and the tortuous strategies attributed to Amit Shah, let us not be too alarmed by the spectre of Big Brother watching with demographic and biometric data. Indian inefficiency may be the saving of India.