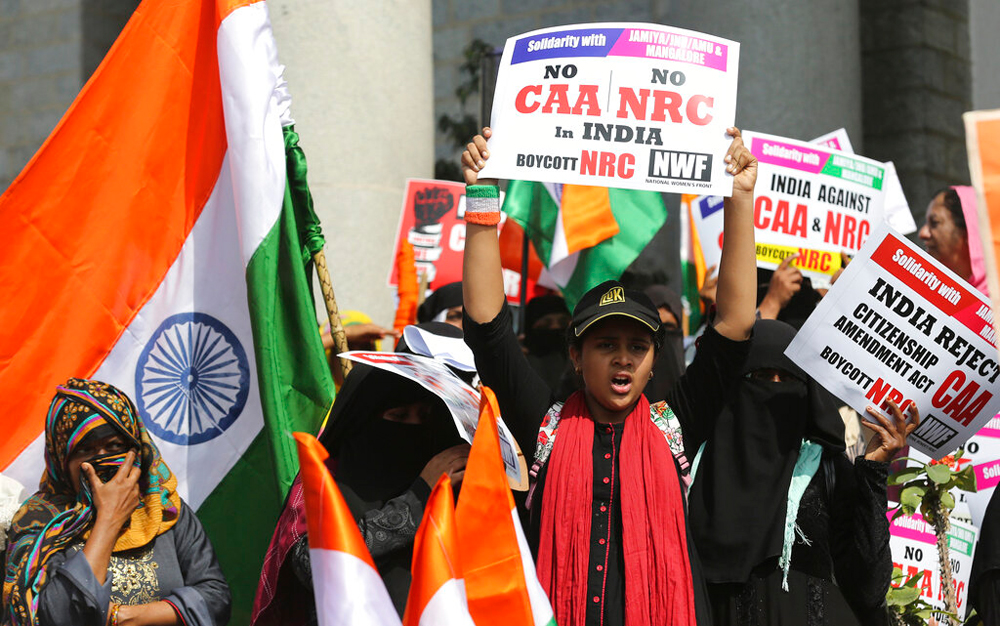 Assertions by supporters of the CAA, 2019 that it is not targeted against a specific group, namely, Muslims, are born either of ignorance or from wilful distortion
(AP photo)
Samantak Das   |   Published 26.12.19, 07:11 PM

Had he sought refuge in India today, it is very likely that Jesus Christ would have been classified as an ‘illegal migrant’ and faced deportation — after all he was a Jew, and Jews are not included in the six communities whose members, the Citizenship (Amendment) Act, 2019 specifies, “shall not be treated as illegal migrant[s] for the purposes of this Act”. It might also be pointed out that the refuge-seeking son of Mary had not come to India from one of the three countries — in alphabetical order, Afghanistan, Bangladesh and Pakistan — whose migrants will no longer be in danger of being deemed ‘illegal’.

The original Citizenship Act of 1955 had been framed for “the acquisition and termination of Indian citizenship” (I have not been able to trace when ‘termination’ transformed into ‘determination’ — which has a whole different set of connotations). Under the section, “Acquisition of Citizenship”, the 1955 Act stated that “every person born in India on or after the 26th January, 1950, shall be a citizen of India by birth”; it also had provisions for citizenship by descent, registration, naturalization and acquisition of territory. Under the section, “Termination of Citizenship”, the Act spoke of three primary ways in which a citizen of India could become a non-citizen — through renunciation, termination, or deprivation of citizenship. Even a quick reading of the Act, and the “Statement of Objects and Reasons” appended to it, makes it obvious that this Act was in keeping with the broad, inclusive, tolerant and secular vision of independent India envisaged by its founders and enshrined in its Constitution. This view is strengthened when one reads the Report of the Joint Committee constituted, under the chairpersonship of Govind Ballabh Pant, to which the original citizenship bill, 1955 had been referred, especially the “Minutes of Dissent” appended to the main body of the report, which contain suggestions that were perhaps considered too radical, either politically (for example, doing away with the additional privileges given to citizens of Commonwealth nations), or socially (allowing the descendants of Indian women married to foreign nationals to acquire Indian citizenship) for the time.

The first major blow to the 1955 Act took place in 1986 when citizenship by virtue of birth, which Pant had described in 1955 as “a cosmopolitan view... in accordance with the spirit of the times, with the temper and atmosphere which we wish to promote in the civilised world”, was severely curtailed, leading many commentators, parliamentarians and ordinary citizens to condemn this move away from the founding principles of the republic, especially Article 14 of India’s Constitution. Somnath Chatterjee’s description of the citizenship (amendment) bill, 1986 as “another sickening instance of surrender to chauvinistic elements and forces of disruption and divisiveness” summed up for many the mood prevailing at the time.

Perhaps more importantly for our discussion, the original Act did not contain the words, “illegal migrant” and “illegal immigrant”, anywhere in its text, nor did the subsequent amendments, even as they narrowed the scope of the 1955 Act. These contentious words which, it may be argued, paved the way for the CAA, 2019, were introduced in 2003, when the most sweeping changes were made to the Act since its inception. Apart from defining an “illegal migrant” as “a foreigner who has entered into India” either “without a valid passport or other travel documents and such other document or authority as may be prescribed by or under any law in that behalf” or who had entered India with such valid documents and so on but had then remained in India “beyond the permitted period of time”, the Citizenship (Amendment) Act of 2003 also inserted Section 14A into the Act, which, among other things, gave the Central government the right to “compulsorily register every citizen of India and issue national identity card to him [sic]”, and to “maintain a National Register of Indian Citizens and for that purpose establish a National Registration Authority”. It also stated that “[t]he procedure to be followed in compulsory registration of the citizens of India shall be such as may be prescribed”, presumably by the Government of India.

The important thing to note is that until December 12 of this year, the Citizenship Act, 1955, as modified until 2015, had nowhere specified the specific ‘community’ of individuals who could either be or not be defined as “illegal migrants”. By specifying six communities — Hindu, Sikh, Buddhist, Jain, Parsi, and Christian, listed in that order in the Act — and the three countries mentioned earlier, the CAA, 2019 has for the first time specifically mandated a religious basis for “the acquisition and determination of Indian citizenship”. A look at the “Statement of Objects and Reasons” for introducing the CAA, 2019 is instructive. The Statement begins by declaring that “[i]t is a historical fact that trans-border migration of population has been happening continuously between the territories of India and the areas presently comprised in Pakistan, Afghanistan and Bangladesh.” It then goes on to assert that the “constitutions of Pakistan, Afghanistan and Bangladesh provide for a specific state religion. As a result, many persons belonging to Hindu, Sikh, Buddhist, Jain, Parsi and Christian communities have faced persecution on grounds of religion in those countries. Some of them also have fears about such persecution in their day-to-day life where right to practice, profess and propagate their religion has been obstructed and restricted.” It justifies the CAA, 2019 by saying that “[u]nder the existing provisions of the Act, migrants from Hindu, Sikh, Buddhist, Jain, Parsi or Christian communities from Afghanistan, Pakistan or Bangladesh who entered into India without valid travel documents or if the validity of their documents has expired are regarded as illegal migrants and ineligible to apply for Indian citizenship” and that, therefore, “[n]ow, it is proposed to make the said migrants eligible for Indian Citizenship.”

The audacity of the casualness with which individuals belonging to other communities — Jews, for example, or atheists — have been assumed to be beyond persecution in these three nations is breathtaking, as is the omission of other neighbouring countries from which people have translocated themselves to India, whether legally or otherwise. This second omission becomes even more glaring when one considers that the first sweeping change to the Citizenship Act, that of 1986, specifically mentioned in its “Statement of Objects and Reasons” that the curtailment of the right to citizenship by birth was necessitated by the fact that “a large number of persons of Indian origin have entered the territory of India from Bangladesh, Sri Lanka and some African countries and they are residing in India. Government has taken a serious view of the entry of persons clandestinely into India...”

Assertions by supporters of the CAA, 2019 that it is not targeted against a specific group, namely, Muslims, are born either of ignorance or from wilful distortion. Consider this final piece of evidence. When it was introduced in, and passed by, the Lok Sabha in January this year, the citizenship (amendment) bill, 2019 contained the words, “persons belonging to minority communities, namely, Hindus...” and so on; the phrase, “minority communities”, was repeated in its third clause amending the Third Schedule of the 1955 Citizenship Act. In its final form, the word, “minority”, has been carefully omitted from the CAA, 2019. Given that “minority community” has for long been used as an acceptable euphemism for Muslims in India, the point needs no further elaboration.

The CAA, 2019 is a direct assault on the idea of India, and no amount of finger-pointing at previous regimes for diluting the original Act can obscure its nakedly communal bias. It is the duty of every patriotic Indian to oppose it.