Advertisement
Home / Opinion / A garden for Buddha at Ayodhya, to give peace a chance to grow

A garden for Buddha at Ayodhya, to give peace a chance to grow

It may not wish away difficulties, but it will not compound problems, as every other formula to ‘solve’ the Ayodhya dispute will 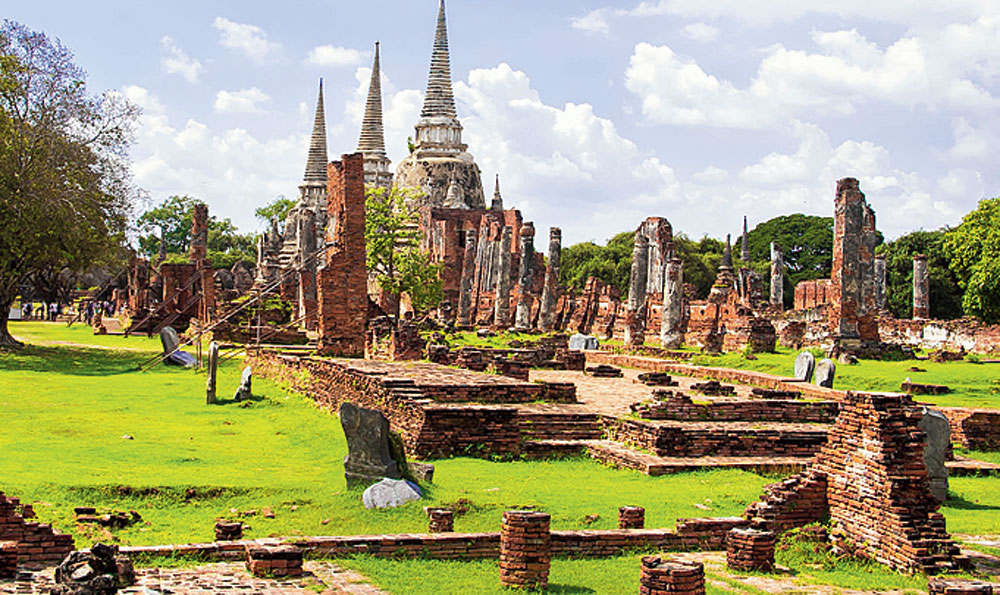 The ruins of a temple at the Ayutthaya Historical Park in Thailand. Ayutthaya (also spelt Ayudhya or Ayodhaya) was a Siamese kingdom that existed from 1351 to 1767.
Source: Wikimedia Commons
Sunanda K. Datta-Ray   |   Published 17.11.18, 02:59 AM

With yet another anniversary of the Babri Masjid vandalism approaching, Narendra Modi is presented with an opportunity to re-establish his authority as the caring and responsible prime minister of all Indians. That means eschewing partisan positions and throwing his full weight behind a permanent solution for the Ayodhya dispute that none of the claimants dare question. He will go down to posterity then as the man who solved the problem Congress created.

One of the most positive aspects of Modi’s tenure as chief minister of Gujarat provoked the state’s Vishwa Hindu Parishad president, Dilip Patel, to thunder about “a vicious attack on Hindu culture and beliefs”. Of course, Modi’s action and the VHP response may have been part of the sangh parivar’s power struggle with Bharatiya Janata Party rebels rallying to the Mahagujarat Janata Party and the VHP’s Ashwin Patel arrested for sedition because of text messages allegedly criticizing Modi. Whatever the motivation, even Gujarat’s Congress chief, Siddharth Patel, complained that more than 250 temples were razed to the ground while — and this was truly rich — Modi’s co-workers accused him of turning a blind eye to similarly illegal Muslim structures.

Not unexpectedly, the chief minister’s action provoked protests and petitions against police and municipal high-handedness. One charge was that while modest street-corner shrines were demolished, the big boys were left untouched. Reprehensible though that was, it was also a demonstration of pragmatism that encourages the hope that this time, too, the prime minister will realize that despite propagandist flourishes, his government’s credibility is seriously at stake. It may think it can brazen out the controversies surrounding the Rafale deal, Reserve Bank of India and Central Bureau of Investigation, but the impact abroad will not be offset by making a song and dance of the romance of an Ayodhya princess queening it over a legendary Korean kingdom and other fables that loom large in the folklore that passes for religion with the BJP’s rank and file. If imagination is allowed to run riot again with historical reality, our chauvinists yearning for the wonder that was India before the Muslims spoilt it all might insist that Ayutthaya near Bangkok, relic of a medieval Siamese kingdom, is Hindu territory. By that same token, His Majesty Rama X, otherwise King Maha Vajiralongkorn of Thailand, can be claimed as a vassal. Through no fault of his own, one mythic god-king has created enough trouble for the country and its people.

Whatever the Supreme Court rules, enforcement will depend entirely on Modi. No government can hide forever behind the skirts of the judiciary. No court verdict can possibly satisfy all the claimants and the authors of the 14 appeals (there’s some duplication here with the Sunni Central Waqf Board and Hindu Mahasabha also appealing) against the Allahabad High Court’s 2:1 majority verdict of September 30, 2010 that the 2.77 acres (of which the Babri Masjid occupied only 1,500 square metres) should be divided equally among the Sunni Central Waqf Board, Nirmohi Akhara and Ram Lalla. Had India been a more law-abiding nation, people might eventually have buckled down to an unpalatable court verdict. But the Sabarimala temple rumpus confirms that judges are not regarded as the final arbiters in matters of faith and tradition.

There have been many thinly-veiled warnings already by politicians like Bihar’s Giriraj Singh, a minister of state at the Centre, and Uttar Pradesh’s Adityanath that “peace and harmony” will be at risk if the verdict is not to their liking. One fear is a repetition of the riots that spread in 1993. Another is that saffron militancy might take an even more aggressive form and ignore the 1991 Places of Worship (Special Provisions) Act which froze the ownership of all places of worship, other than the Ramjanmabhoomi-Babri Masjid, as on August 15, 1947. If that happens, the sangh parivar’s next target might be the Gyanvapi mosque next to the Kashi Vishwanath temple in Varanasi. While Muslims have been extraordinarily silent so far, that does not mean they will not explode in a suicidal protest if the saffron brigade’s campaign seems like moving towards a final solution. Lynching episodes in the name of cow protection, attacking inter-religion romance, the physical assault of critics of Hindutva, including Swami Agnivesh in Jharkhand, and the concerted demonization of Muslims since May 2014 are straws in an ominous wind.

The Rashtriya Swayamsevak Sangh’s Mohan Bhagwat inadvertently indicated a way out when he suggested the government should enact a law or pass an ordinance to circumvent legal delays. He, of course, meant that ‘a Ram bhakt government’ like Modi’s (quoting the VHP’s Alok Kumar) can use its power only to achieve the end on which his organization has set its heart. It would be inconceivable for Bhagwat that the prime minister might consider anything other than the “grand mandir” of the RSS’s dreams. But as Adityanath senses, the government has undertaken wide consultations to find an “alternative solution”. Although the All India Muslim Personal Law Board has rejected the out of court settlement that the Art of Living founder, Ravi Shankar, mooted, two Sunni petitioners have endorsed the plea. The recent suggestion of a Buddhist monastery by Savitri Bai Phule, a BJP member of the Lok Sabha from UP, recalls the writ petition by an Ayodhya resident, Vineet Kumar Maurya, asking the government to declare the disputed land “Ayodhya Buddha Vihar” under the Ancient Monuments and Archaeological Sites and Remains Act, 1958. Called Saket, Ayodhya was an important Buddhist centre in ancient times, as the Archaeological Survey noted in 1862-63. This could be blended with other proposals for a non-denominational garden of remembrance.

There is no reason to suppose Modi thinks differently from the sadhus, sants and kar sevaks whose shrill rhetoric dominates the Ayodhya dialogue. But the responsibility of office sets him apart from the strident rabble. His extravagant Statue of Unity was seen as an indication of a desire for a mainstream lineage transcending the saffron lobby. As a shrewd strategist, he knows how the world reacts. He is aware of South India’s coolness on the Ayodhya issue and of his party’s weakness in the Rajya Sabha. He may not publicly discourage Rakesh Sinha, the RSS ideologue and BJP member of the Rajya Sabha, from introducing a private member’s bill to construct a Ram temple but he may not do anything to achieve that end. Temples are best left to enthusiasts like Asansol’s Trinamul Congress mayor, Jitendra Kumar Tiwari, who has vowed to build 10 before the next Chhath Puja. Modi’s task is to decide on the best use of the disputed site without stirring up further strife or damaging India’s reputation as a responsible nuclear power and potential global force.

The need as the Lok Sabha election approaches is not to try to distract public attention with fables that are swallowed only by the most gullible but to take concrete action to restore confidence in the government’s ability not only to provide the basic essentials but raise the standard of living. Gimmicks won’t achieve this. Changing the base year and means of calculating the gross domestic product was one such ploy to suddenly project a vastly improved economy. Banning Rs 500 and Rs 1,000 notes (thus, withdrawing 86 per cent of the money in circulation) was another. A third, the goods and services tax, was a measure Modi had opposed in Gujarat and whose haphazard implementation has provoked complaints of confusion and losses among many sections of the business community.

Given these challenges, a rational leader needs to look beyond electoral calculations to the long-term national interest. A non-denominational garden of remembrance at Ayodhya dedicated to the Buddha may not wish away difficulties. But it will not compound problems, as every other formula to ‘solve’ the Ayodhya dispute will. It will also entitle Narendra Modi to claim to have upstaged P.V. Narasimha Rao.