Religion, politics and India’s place in the world 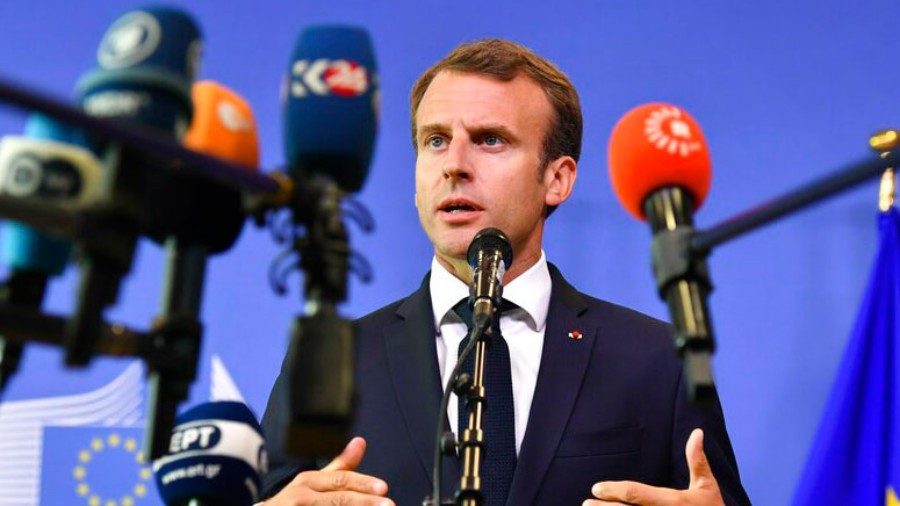 Emmanuel Macron, France’s president, declared that the Republic was besieged by jihadist Islam after a schoolteacher was decapitated for using cartoons of Mohammad as a teaching aid.
AP file picture
Mukul Kesavan   |   Published 01.11.20, 12:41 AM

The tension between politics and religious community defines the contemporary nation state. This is true not only of states that are openly majoritarian, like Israel or Pakistan, but even those that aren’t.

British politics is currently roiled by a row about anti-Semitism. Jeremy Corbyn has been suspended for saying that the findings of an inquiry into anti-Semitism in the Labour Party during his tenure as its leader exaggerated the extent of the problem. The politics of the Republican Party in the United States of America are shaped by the cultural and religious prejudices of Evangelical voters. Emmanuel Macron, France’s president, declared that the Republic was besieged by jihadist Islam after a schoolteacher was decapitated for using cartoons of Mohammad as a teaching aid. China, a formally atheistic State, has made the erasure of the Uighurs, a small Muslim community in Xinjiang, a political project. Under Narendra Modi, a once performatively pluralist India has strained to become, in policy and in law, a Hindu rashtra, ideologically committed to discriminating against its minority citizens, particularly Muslims.

In Britain, the US, France and China, religious difference is sharpened by racism. Anti-Semitism has always been religious bigotry with a racist edge. This is one reason why the left wing of the Labour Party, which prides itself on its anti-racist commitments, is so sensitive to the charge of anti-Semitism. The Republican Party’s political coalition is led by white Evangelicals. To the outsider, it seems obvious that the party’s constituents are united as much by white anxiety as Christian belief. In France, the stand-off between the Republic and Islam is also a confrontation between France’s unassimilated North African citizens and a State that uses laïcité, a rigorously religion-blind secularism, as a blindfold, the better to ignore racial inequality and discrimination. It’s the reason why a liberal like Macron and a fascist like Marine Le Pen can use the same rhetoric about republican values in their response to Islamist violence. The Chinese privileging of Han identity and culture at the expense of religious minorities like Tibetans and the Uighur is an assertion of ethnic superiority. Hindutva is the exception to this rule: it is a pure assertion of communal hegemony, unalloyed by racism.

To note that politics is frequently communal in nations that aren’t ideologically denominational is not, however, to equalize bigotry or paint all these countries with the same brush. It is to establish a hierarchy of intolerance.

People will argue about the extent of anti-Semitism in the Labour Party in particular and British politics in general. Corbyn’s supporters claim that the charge of anti-Semitism was exaggerated to discredit a left-wing insurgency that threatened the centrist consensus of parliamentary politics. Others have argued that anti-Semitism has a durable history in Labour Party politics going back to figures like Ken Livingstone, who was leader of the Greater London Council in the 1980s.

Regardless of who is right, the relevant fact is that a statutory public body like the Equality and Human Rights Commission can conduct an inquiry into one of the two major political parties in Britain and formally arraign it for instances of discriminatory behaviour. It has the power to force it to institute an independent disciplinary procedure. British politics is home to Islamophobes, anti-Semites and racists but there is space in the mainstream media to talk about bigotry and institutional recourse against it. From the vantage point of Delhi, the accuracy of the EHRC’s report is almost beside the point: for something like this to happen in contemporary India you would need daily miracles for a month of Sundays.

Despite Donald Trump’s animus against Muslims and his country’s bipartisan enthusiasm for violently re-arranging the furniture in Muslim countries, America’s original sin is racism, not religious bigotry. A country where a nominally Jewish politician like Bernie Sanders can plausibly run for president and where Ilhan Omar, a Somali Muslim woman, can represent a Minnesota district that’s 63 per cent white and overwhelmingly non-Muslim, is different from the country we live in. Modi’s India is a low bar, but our republic’s reason for being till not so long ago was that it claimed to be a pluralist, inclusive nation. Which is why it is important to acknowledge those qualities where they still exist, if only to construct a coherent view of the world and our place in it.

Macron’s France, despite its racial and religious diversity and its vaunted secularism, seems a more brittle and dangerous place for a religious minority than Trump’s America. The run-off second round vote for the presidency of France in 2017 saw France’s dominant political parties, the Socialist Party and the Republican Party, displaced by Macron, a political upstart at the head of the brand-new En Marche, and Marine Le Pen, the leader of the far-right National Front. Had Le Pen won, France would have been the first major Western democracy to be ruled by a neo-fascist since the Second World War. Given the current communal temperature in France after the jihadist murders that followed the cartoon row, this could still happen. The 1905 law on the separation of Church and State in France froze the folkways and institutions of a white Christian country into a rigid conception of secularism perversely hostile to public cultural difference. This is why even mainstream French politicians will construe burkinis on the beach and halal food in the supermarket as signs of a creeping separatism, even the first steps in the creation of a “counter-society”, to use Macron’s ominous phrase.

But it is hard to think of any form of State-sponsored bigotry more sinister than China’s institutionalized assault on the Uighur. From face-recognition software to monitor signs of religious observance to correction camps, to the systematic destruction of mosques, to the suppression of language and culture, to the sterilization of women, China’s Uighur policy is genocide in slow motion. That Muslim politicians from Muslim countries like Pakistan should look away tells us something about their status as China’s clients but even more about the cynical, transactional nature of this brand of Islamist politics. Ironically for a state that was admired by the philosophes of Enlightenment France for its civilizational ‘secularism’, China is now the world’s poster-child for State-sponsored bigotry.

It has become harder for Indians, though, to make these judgments with a straight face, given the subcontinental glass house we live in. Poor but democratic used to be our sales pitch before we got tired of being poor. We still have elections so perhaps one way of measuring our place in the pecking order of minority suppression is to acknowledge that we are where France might have been had Marine Le Pen won two successive presidential elections. The problem with that comparison is that she dropped the death penalty, homophobia and anti-Semitism from her party’s political rhetoric to become respectable. Marine Le Pen is probably too ‘moderate’ to suggest the enormity of Yogi’s UP and Modi’s India. This is where we are.