The search for an alternative political narrative 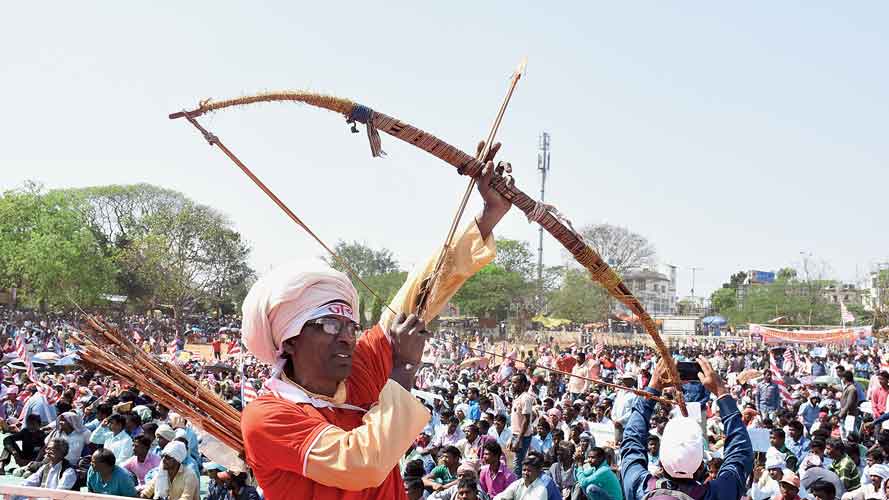 The unprecedented electoral success of the Bharatiya Janata Party has posed a peculiar challenge to other political parties, especially in North India. They have to offer a political critique of the existing regime to survive in the business of electoral politics. And, at the same time, they have to avoid making any critical comment on Hindu communalism. The non-BJP parties, it seems, have realized that they have to adjust themselves within the Hindutva-driven dominant discourse of contemporary politics.

This political dilemma has been discussed extensively in the last few years. There is consensus that the Opposition has failed to evolve any electoral alternative to the BJP primarily because it does not have any enthusiasm to create its own political narrative.

This overtly liberal assessment of non-BJP parties is valid. The opponents of the BJP — from the Aam Aadmi Party to the Congress — find it easier to show their commitment to Hinduism, if not Hindutva, to legitimize their presence.

However, there is a limitation to this well-intended liberal critique. It creates a strong impression that the search for an alternative political narrative is inextricably linked to the revival of Congress rule (or  something similar to the less-hostile National Democratic Alliance regime under the leadership of Atal Bihari Vajpayee). This impression is not entirely wrong. Many political commentators evoke Jawaharlal Nehru’s The Discovery of India, a text he wrote in the 1940s, to rediscover a possible anti-BJPism in the 2020s.

Let us discuss two popular metaphors — Hindu majoritarianism and the Idea of India — systematically to go beyond this political-intellectual stagnation.
One must begin with a few straightforward questions: what is the contemporary form of majoritarianism? And, in what ways, is it linked to Hindutva? The BJP (especially its senior leaders like Narendra Modi and Amit Shah) defines its electoral triumph as a reflection of the success of Indian democracy. Despite using Hindu symbols in the name of nationalism, the party does not subscribe to any kind of majoritarianism, at least officially.

Instead, the BJP relies on a carefully crafted narrative of Hindu victimhood. The plight of Hindus is highlighted as a form of social discrimination. It goes well with the BJP’s stated political philosophy of positive secularism and the Rashtriya Swayamsevak Sangh’s established criticism of the majority-minority framework.

The BJP’s opponents often fail to understand this strategic dividing line between the BJP/RSS’s narrative of Hindu victimhood and positive secularism — sabka saath, sabka vikas. The Hindu victimhood argument empowers them to define Hindus as a powerless majority; while the slogan, ‘Sabka Saath, Sabka Vikas’, offers them an opportunity to avoid any discussion on the specific issues and concerns of numerically inferior and marginalized groups — the minorities such as Muslims. In this sense, competing minorityism appears to be the most significant aspect of contemporary majoritarianism.

Opposition parties as well as a section of political commentators do not pay attention to this line of reasoning. As a result, they take refuge in the old — outdated — rigid, secular resolve based on the imaginary unity of deprived identities (OBC-Dalit-Adivasi-Muslims-Poor) to counter the BJP’s Hindutva politics. Or, alternatively, they begin to accept the fact that there is indeed a need to take care of the feelings of Hindus.

This brings us to the second metaphor — the Idea of India. This term, we must note, is not self-explanatory or a fixed entity. It is always open to multiple interpretations from a variety of perspectives. In recent years, Modi is the only politician who has introduced a well-defined notion called ‘New India’ to offer an outline of his political imagination. Of course, one may find a number of inconsistencies in this official doctrine. Yet, it shows a constant engagement with the changing Indian realities.

On the contrary, the opponents of the BJP have used this term rather vaguely to reject Hindutva politics. They have not yet paid any serious attention to the need to give meaning to the Idea of India. It is, in fact, fashionable to evoke Nehru, Gandhi, Ambedkar and the text of the Constitution to hide intellectual laziness.

The dominant discourse of politics, it is clear, is deeply embedded in identity-centric imaginations. The political class is shamelessly violating the secular principles. Religion and caste are being celebrated in the name of people’s sentiments. The economic issues are confined to employment opportunities and  State-sponsored charities. No political party is interested in a serious public discussion on economic inequalities — the growing division between the rich and the poor.

There is certainly a possibility to weave a counter-narrative around these issues. After all, majoritarianism — the idea of a bahujan — could also be defined in terms of collective sufferings: an attempt to think of economic equality in a deeply religious and caste-divided society. The Idea of India, in this sense, emerges as a powerful template. It offers us to think of the raw material that can help etch the outline of an alternative political imagination.

The rediscovery of those secular and inclusive cultural elements of our contemporary collective existence that constitute us as a nation is one such resource. Nationalist leaders, such as Gandhi, Nehru, Ambedkar and Bhagat Singh had made a very similar attempt during the anti-colonial struggle. Their constructive approach — the method — to evolve a few politically convincing and culturally appropriate principles could be an important reference point to rethink the idea of alternative politics.

The Indian experiment with democracy is another intellectual reservoir in this regard. Democracy is not merely about regular elections. It finds deeper, profound and constructive meanings in everyday public life. The contribution of grassroots people’s movements is crucial in redefining the meanings of democracy in postcolonial India.

The workers’ and peasant movements have underscored the values of economic equality. The Dalit-Adivasi-Bahujan movements have raised the questions of democratic dignity and respect. The feminist movement has made us aware of the significance of gender equality, while the struggles of religious and linguistic minorities have transformed Indian public life into a conversational space.

The political resources generated by people’s movements are not restricted to their respective struggles. Recent studies, especially a survey conducted by Lokniti-CSDS on Indian youth (https://www.lokniti.org/Indian-Youth-Aspirations-and-Vision-for-the-Future-Report-Launch), suggest that the respect for religious and cultural difference, celebration of the attitude of living together separately and an aspiration for a good society based on economic equality are some of the powerful, contemporary values.

It is important to recognize these emerging trends as a clear manifestation of an evolving alternative political narrative — simply to get rid of the existing intellectual-political stalemate.