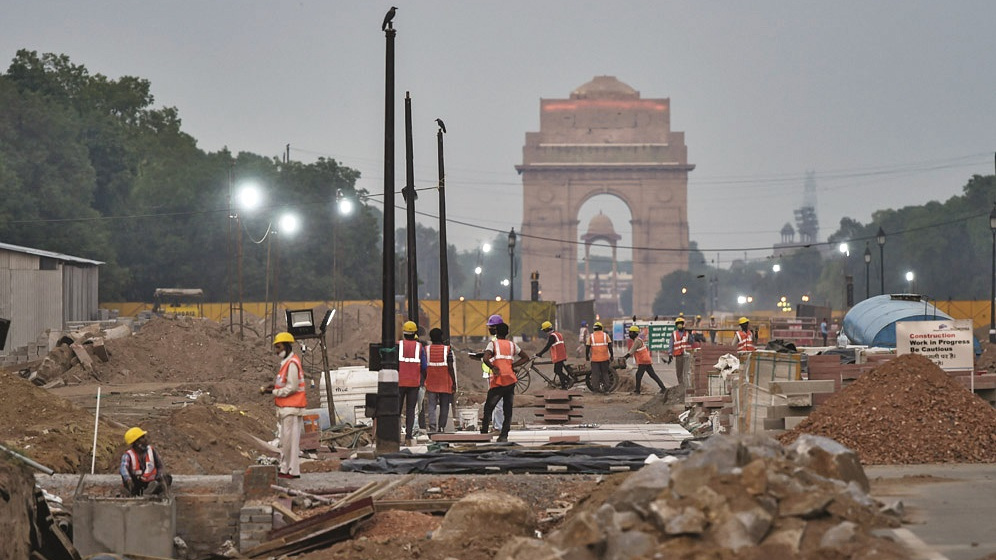 The personal, we are told, is political, yet the SARS-CoV-2 pandemic, the second wave of which is wreaking havoc across India at this moment, seems to have driven a perceptible wedge between the two. Since this column last appeared in the pages of this newspaper a month ago, roughly three dozen people I know quite well have contracted the coronavirus disease, and some half-a-dozen have succumbed to it. Among those who have died of Covid-19 are former teachers and colleagues, neighbours, friends of relatives, and relatives of friends. Every death has come as a shock, every new case has brought in its wake a dreadful foreboding of what might follow. Even as I type this out, several of the students in my department are battling the disease, a childhood friend is hospitalized with it, and a close friend and colleague is (thankfully, fingers crossed) on his way to gradual recovery. Add to this the tension about where near and dear ones might receive their second dose of the vaccine; the frantic search for oxygen for an aged relative a fortnight ago; the constant worry and despair about those we know and love; and the apprehension that each day will bring yet another piece of ill news. In every single instance the horror and dread have been at a deeply-felt, personal level. Every email one sends or receives either begins or ends with an expression of hope that the recipient is staying safe and keeping well, and every telephone conversation begins with an enquiry about each other’s health and that of their loved ones. My experience is by no means exceptional or unusual — I suspect anyone reading this has felt the same emotion any number of times, especially during these last few months.

Yet, if one is able to pull back, as it were, and look at the larger picture, things appear different. The leaders of the party in power in New Delhi are seemingly more concerned with building the hideously expensive new Central Vista, fudging the numbers of those infected, dead or dying, and denying either that there is a shortage of oxygen in our hospitals and health centres or that unacceptable numbers are dying of the virus (even as corpses float down the Ganges). With the official figure of those who have contracted the disease having crossed 25 million (widely believed by experts to be a gross underestimate), and deaths exceeding 2,80,000 and counting, how is this possible? The usual answer finds the root cause of this disaster in a combination of misplaced confidence, distrust of expert opinion, lack of planning, inept governance, and plain callousness. But could it be that there is a method in this seeming madness? A calculation based on a cost-benefit analysis that has concluded that the misery and mortality wrought by the virus are worth it? That the long-term gains in terms of power and influence are considerably greater than the short-term losses in terms of lives and livelihoods?

India has a little less than 1.4 billion inhabitants, and if we accept the official figure of roughly 25.5 million coronavirus cases as of date, that works out to less than two per cent of the population. Even if the count is multiplied 10 times, or even more, as some experts think it ought to be, the number of cases comes to about 20 to 30 per cent of the total population. Deaths are being undercounted too, but probably by not much more than a factor of two or three. Where mortalities are concerned, the official toll is barely over one per cent of all coronavirus cases, and if we take the higher figure for both infections and deaths (10 times the number of infections, three times the number of deaths), the number falls to one-third of one per cent, or 0.33 per cent. Now, one-third of one per cent of 1.4 billion is 4.66 million. The United States of America has had over 6,00,000 deaths so far in a population of 333 million, or a mortality rate of roughly 0.18 per cent, if one considers the population as a whole. If the same mortality rate were to be seen in India, the number of deaths would be 2.52 million, but, in actual fact, it will probably be smaller, not least because a virus tends to mutate to the point where it can thrive without killing off its host organism. This is likely to happen with the SARS-CoV-2 virus as well, so that eventually we will become accustomed to living with it, as it makes the shift from pandemic to endemic. Whichever way one looks at it, even if the absolute figures are horrifying, the percentage of the population which may eventually succumb to the coronavirus is actually quite small. This ongoing pandemic will infect tens, if not hundreds, of millions of Indians, and leave hundreds of thousands, if not millions, of us dead.

It doesn’t matter what our individual fears and personal tragedies might be, when seen from a distance, as a collective, the percentage of Indians who will actually succumb to the virus is negligible. Or, in other words, once the dust settles, and the dead are disposed of, the number of people who will still be around to vote in the next general elections will not be very much less than those who voted in the last one. This, essentially, is the algorithm of cynicism, a barely-disguised contempt for the people, which seems to be driving those at the helm of power in our country. The fact that no other nation is asking its people to pay for the Covid-19 vaccine, or asking states to foot the bill for vaccine purchase (instead of doing so Centrally), or encouraging differential pricing by private vaccine manufacturers is just one instance of this calculated, number-based cynicism. Bodies will be burned, or buried, or thrown into rivers and streams, but the edifice of the now-under-construction Central Vista in our grandly-imagined capital city will remain. In the years to come, we, the atmanirbhar  people of India, will learn to live with the memory of the pandemic (which will fade, as memories do), a government that is indifferent, and often hostile, to our woes (which we will get used to, as humans do), a shining new multi-billion dollar capital city, and towering statues of noble Indians dotted across the landscape, in villages and towns (which we will grow to love and admire, as we do so much of the grand panoply of state). The original cynics of ancient Greece abjured all worldly possessions and sought to live on as little as possible; the present-day cynics who rule our destinies feast on delusions of eternal grandeur.