Tinsukia rises in protest against CAA

People from all sections of society participated in the rally, chanting slogans against the Act, Narendra Modi and Amit Shah 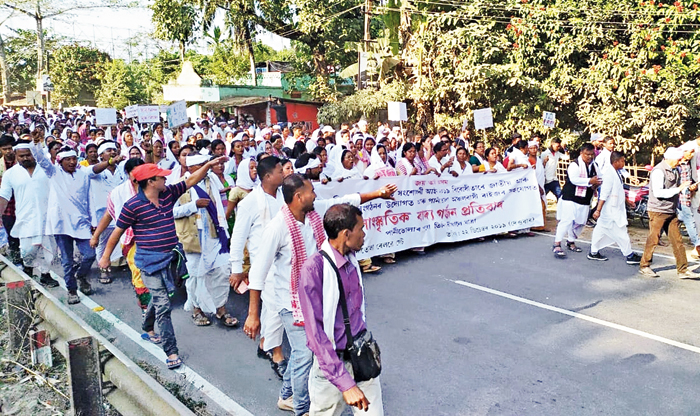 Protests against the Citizenship (Amendment) Act, 2019, intensified in Tinsukia district on Sunday.

Around 7,000 people hit the streets at Panitola to protest against the law. Covering 6km on foot, the rally reached Laipuli bypass and those assembled protested for hours.

People from all sections of society participated in the rally and chanted slogans against the Act, Prime Minister Narendra Modi and home minister Amit Shah.

“They ( government) can’t settle anyone in our motherland. This is unacceptable. We will die but not allow outsiders to settle here,” Ramnath Bharali, a protester, said .

The Bengali community of the district also joined the anti-CAA protests on Sunday.

Thousands of people, mostly women, took out a rally from Shahid Piyoli Phukan playground at Tambulbari and took a round of the town with placards in hands and chanted slogans.

“We are totally disappointed after the passing of the bill into an Act, which is detrimental to the indigenous people of Assam and the entire Northeast. I believe this act is political in nature formulated to capture the Hindu vote bank and is an act of extension of Hindutva ideology to create a Hindu rashtra,” Medha Dey, a protester, said.

Thousands gathered in protest at Doomdooma town field. Marwari Samaj of Greater Doomdooma members also stood with the protest against CAA in the state.

Spontaneous shutdowns of several shops were witnessed in the district as businessmen went out to join the protest.

Curfew was promulgated for another nine hours from 8pm on Sunday.

The All Moran Students Union and its groups in the district will organise a gana garjan against CAA at Kakopathar on Monday.