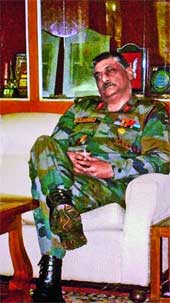 Jorhat, April 2: Tucked deep inside elephant territory in Baksapahar, Karbi Anglong district, lie the ruins of a temple, which speak of a civilisation that flourished on the Dhansiri riverbank in the pre-Ahom period.

Go even further, about 3km into the dense jungles and one comes across engravings of female figures, lotuses and other geometric designs on hard granite.

These were some of the things that the historical archaeological expedition undertaken by the students and teachers of Jorhat College came across, near the Deopahar area of Golaghat, recently.

The principal of the college, Devabrata Sharma, who led the team, showed a computer presentation of hundreds of stone slabs cut into large geometric shapes and which most likely formed the base of the temple.

"We split from the main group and three of us, including Raktim Ranjan Saikia, assistant professor of the department of geology, JB College, went deeper into the jungles.

"We were led by Deepak Mech Cachari, a member of the Mech Kachari Jatiya Parishad, who had told us that he would show us some engraved stone friezes, which he had seen in his childhood while grazing cattle," Sharma said.

"It was scary with elephant spoor lying all around the leech-ridden path we traversed and at one time I felt lost with no cell phone connectivity, wondering whether we would get back, having to hack our way through, and then came upon one of the stones. There could be many such lying around and we had to clear it of dirt, he added.

The area lies within the Mech Cachari Development Council area.

Sharma said it was unknown whether the Archaeological Survey of India was aware of these, as there is no mention of the stones in the history books.

"We have plenty of historical documents on the 600 years of Ahom rule in Assam. It is assumed that there was a nagar (township) surrounded by the rampart of the Numaligarh fort.

"The Naksa Pahar ruins are being preserved but the innumerable remains and sculptures scattered in the Baksa Pahar and the Alongpira of Karbi Anglong remain uncared for and require a proper study," he said.

The Deopahar, which comes first when you take the route from National Highway 37, is situated at a distance of 1km from the Dhansiri and 5km from Brahmaputra.

"It can be assumed that international trade to Myanmar and China flourished through the river route of Dhansiri and was controlled from Deopahar. This is the place where the Siva temple lies in ruins," he said.

Saikia, a geologist, said most likely the ruins dated to the 10th century or before as granite was the stone used and not the softer sandstone which the Palas used.

"This could be during the Salasthambha era in the sixth century as the sculptors must have been brought from outside the region or from lower Assam as the hard iron used to cut such hard stone was available only in lower Assam," he said.

Saikia added that a friend from Poland, who would be visiting later this year, had promised to help him carbon date the iron hinges, which held the stone slabs together and of which he had collected a few.

The Kachari community also needs to be studied in depth as they too had something like menhirs.