A week after the ruling alliance won the Assembly elections with a clear majority for the second successive term, Sarma was elected as the legislature party leader 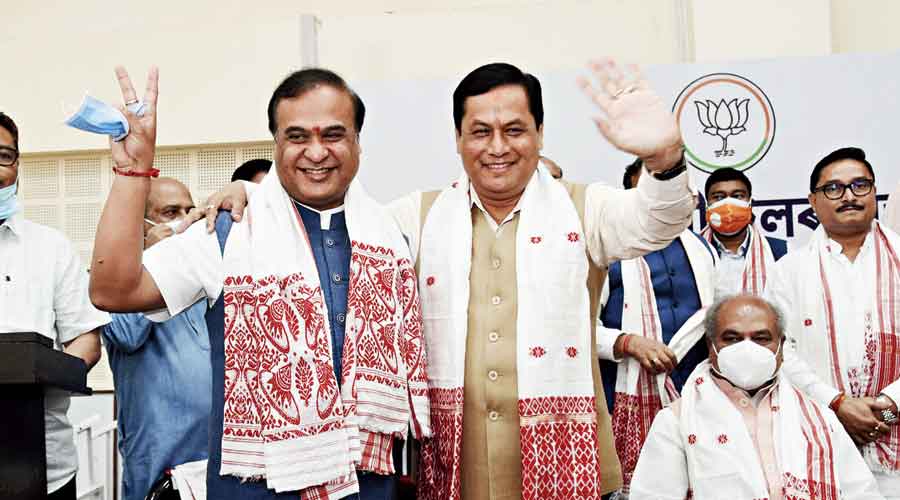 Assam’s caretaker chief minister Sarbananda Sonowal on Sunday expressed confidence that the newly elected NDA legislature party leader Himanta Biswa Sarma, who is like a “younger brother” to him, would take the state to greater heights.

A week after the ruling alliance won the Assembly elections with a clear majority for the second successive term, Sarma was elected as the legislature party leader.

Both Sonowal and Sarma were contenders for the top post.

Sonowal, who proposed Sarma’s name as the leader of the legislature party, said the convenor of the North East Democratic Alliance (NEDA) — the NDA’s version in the region — was like a “younger brother to me and I wish him all success in his new journey”.

“Himanta has been given a huge responsibility and I bestow my love and blessings on him so that he can perform his duties well for the welfare and progress of all sections of the society,” he said while addressing the newly elected members of all three alliance partners — the BJP, AGP and the UPPL.

The chief minister-designate has a long and rich political experience which will help him make Assam a developed state, said Sonowal.

He said that for the last five years, the BJP-led government in the state had been able to win the people’s trust and confidence by bringing in peace, progress, security and development.

“We thank the people for reposing their trust in us and giving us a clear mandate for the second successive term. I urge all the elected members of the alliance to work with dedication and honesty,” he said.

Requesting the MLAs to work not for their personal goals but for the betterment of the society, Sonowal said, “Our aim should be to remain united and dedicate ourselves for service to the society, our state and the nation.”

At the meeting, he also urged the new members of the Assembly to dedicate themselves to the fight against the second battle against Covid-19 by maintaining all protocols.

Prior to the BJP legislature party meeting, Sonowal went to Raj Bhavan and tendered his resignation as the chief minister to governor Jagadish Mukhi who, as per tradition, asked him to continue in office till the formation of the new government.

The party’s central leadership had summoned both Sonowal and Sarma, contenders for the top post, to New Delhi on Saturday for discussions on the formation of the next government in the state.

The BJP had not announced the name of the chief minister before the polls and speculations are rife for the past one week on who would helm the affairs of the state.

Sonowal was projected as the chief ministerial candidate during the 2016 polls, which the BJP had won, making him the first BJP chief minister in the North East.

The alliance of the BJP, Asom Gana Parishad (AGP) and the United People’s Party Liberal (UPPL) is the first non-Congress government in the state to win the elections for the second consecutive term.

Of the 126 Assembly seats in Assam, the ruling alliance has secured 75 seats with the BJP winning 60 while its alliance partners AGP got nine seats and UPPL six.