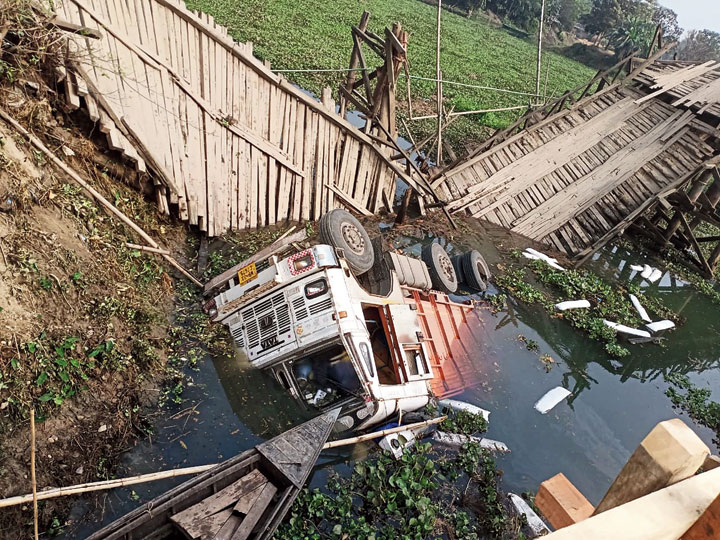 At least seven persons, including two students, died in road accidents in different parts of Assam in the past 24 hours.

Five persons were killed when a speeding Tata 407 truck rammed into a parked Maruti Suzuki Celerio at Moirabari in Morigaon district on Saturday evening. While Osman Ali, Wahidur Rahman and Mazibor Rahman, sitting near the car, died on the spot, Nekibur Rahman and Joynal Abedin succumbed to their injuries on the way to hospital. Golam Hussain has been admitted to the hospital in a critical condition.

“The truck dragged the vehicle for a distance after hitting the car,” said Ajith Boro, officer-in-charge of Moirabari police station.

In another mishap on Sunday morning, a Bolero pick-up van ran over three girls riding bicycles near the Kolia Bhomora bridge in Upper Assam’s Tezpur.

Pallav Saikia, an engineering student, also died when his motorcycle collided head-on with a Scooty at Bumporbatia in Tezpur. The Scooty rider, Tinku Deka, was admitted in hospital with serious injuries.

In another incident, a tractor driver died when his vehicle lost control and plunged into Charan Beel at Morigaon.

A 10-wheeler truck from Bengal fell from a wooden bridge into a river channel at Folimari near Lakhipur police station in lower Assam’s Goalpara district on Sunday morning. The truck occupants fled after the incident.

Seven persons were also injured in a road accident at Gauripur in Dhubri district on Sunday.