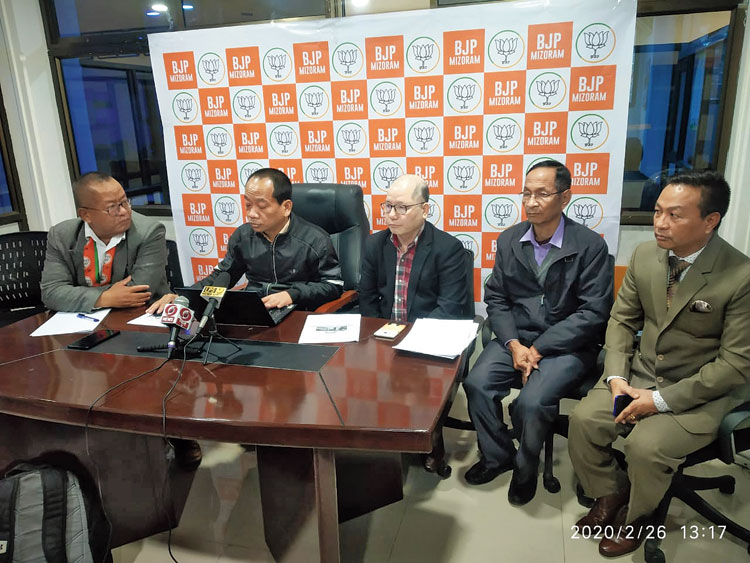 The Mizoram unit of the BJP on Wednesday asked the ruling Mizo National Front (MNF) to step out of the NDA alliance if the party was not on an equal term with it.

The BJP’s “demand” follows chief minister and MNF president Zoramthanga’s remarks that his party is against the BJP’s ideologies.

The MNF is the constituent member of the BJP-led North East Democratic Alliance (Neda). However, the regional party did not work with the BJP in Mizoram.

State BJP president Vanlalhmuaka told a news conference on Wednesday that his party has taken the chief minister’s comment seriously because it could undermine the BJP-MNF alliance.

He said during a discussion on private member resolution related to “religious freedom” in the Assembly on Friday, Zoramthanga said the MNF, like others, did not find the BJP “a good party”.

The chief minister said the MNF did not support the BJP’s agenda and was fighting aga-inst the party because of its ce-rtain principles which are unacceptable to the Mizo people.

Vanlalhmuaka said the chief minister’s remark was a serious matter that should not be spoken by the Neda member. “We suggest the chief minister and his party withdraw from Neda if he finds that the BJP and MNF are ideologically antagonistic to each other and that the party not good for the Mizo people.”

Vanlalhmuaka also blamed Congress president and former chief minister Lal Thanhawla for levelling an allegation that the BJP government at the Centre will lift the inner-line permit (ILP) regime in the Northeast.

During a political session at Congress Bhawan last week, Lal Thanhawla said the BJP-led NDA government was determined to scrap the ILP system, only for which Mizoram has been exempted from the purview of the Citizenship Amendment Act (CAA).

Inner-line permit is an official travel document issued to Indian citizens for entry into protected areas of the northeastern states, including Mizoram.

Refuting the allegation, Vanlalhmuaka said the BJP is not a party that will go to the extent of lifting the ILP but instead it wanted to strengthen the system.

MNF leader Lalzamlova reacted to the BJP remarks that the MNF being a Neda partner does not imply that it would follow the footstep of BJP. He said the MNF and BJP are two different political parties with their own ideologies and principle. “We have our own constitution, ideologies and principles. We can’t follow and implement the BJP agenda just because we are part of Neda,” the party general secretary said.

Initially, the MNF was opposed to the CAA because it was harmful for Mizoram but later voted for the bill because the Centre exempted the state from its purview, he said.