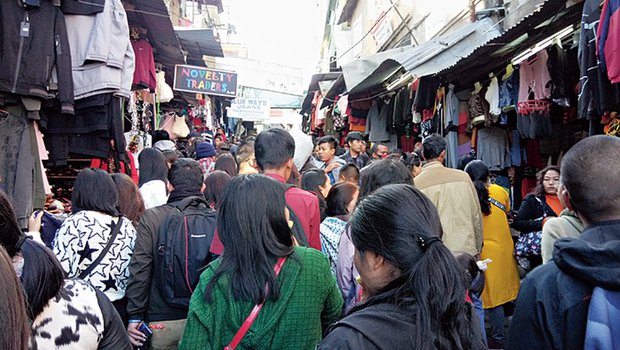 Residents have been queuing up at shops for essential commodities since Monday evening after the Mizoram government shut its international and inter-state borders, barring a few entry and exit points, over the novel coronavirus outbreak.

Some traders reportedly hiked prices following rumours on social media about a patient allegedly being detected with coronavirus in Assam. It sparked apprehension that the government may close its border with Assam, from where Mizoram essential supplies are routed.

In Aizawl, some shops ran out of stocks by Tuesday evening. Civil supplies and consumer affairs minister K. Lalrinliana, however, said there was enough stock of essential commodities, including oil and cooking gas.

A trader said that there was no cause to worry as more stocks are coming from neighbouring states.

Lalrinliana said the supply of essential commodities was unlikely to be disrupted because they hardly imported them from Bangladesh or Myanmar.

Officials said rice stock on Tuesday was 1,68,569.73 quintals in departmental godowns and 1,59,028.20 quintals in FCI godowns. The stocks are sufficient to meet requirements for three months, they added.

The government on Tuesday also constituted the state-level task force on mitigation of coronavirus, headed by chief secretary Lalnunmawia Chuaungo. During the task force meeting on Tuesday, Chuaungo said no coronavirus case had been detected in the state till date. He said strict vigilance would be maintained along the international and national borders to prevent the spread of the deadly disease.

Restrictions will be relaxed for particular cases at Zokhawthar along the Indo-Myanmar boundary and at Kawrpuichhuah along the border with Bangladesh, a home department official said. He said BSF troops would be deployed along with state police along the Indo-Bangladesh border, while Assam Rifles and Mizoram police will man the boundary with Myanmar.

The state government also closed its inter-state borders, barring four entry or exit points, Vairengte and Bairabi for Assam and Khawkawn and Kanhmun for Manipur.

Police on Tuesday filed a suo motu FIR against a social media post, which claimed a coronavirus patient had been detected at ITI Veng here. Aizawl superintendent of police C. Lalruaia said: “The post is baseless as no coronavirus case has been detected in the state. A probe has been launched to trace the user.”

Social activist Vanramchhuangi lodged a complaint in Aizawl police station on Tuesday over surgical masks being allegedly sold at Rs 40 each at many shops, instead of the usual price of Rs 10, following the outbreak.