Protesting teachers asked to be patient in Shillong 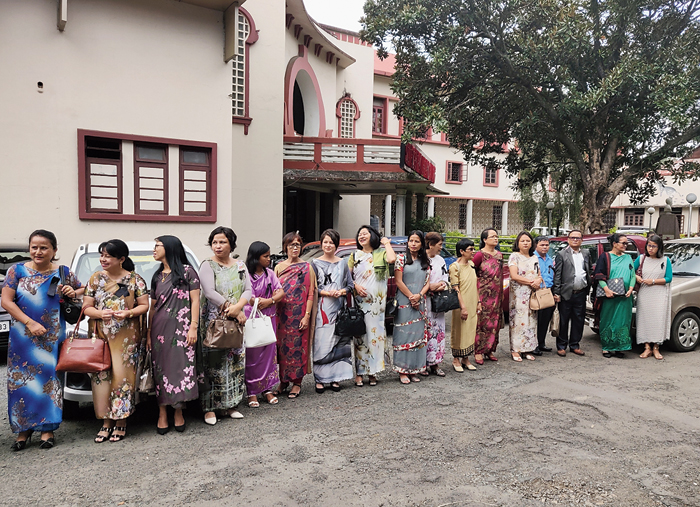 A section of schoolteachers in Meghalaya wore black badges on Thursday as they reminded the state government about their pending dues while education minister Lahkmen Rymbui asked them to be “patient”.

As the country celebrated Teachers’ Day, the atmosphere at U Soso Tham auditorium here was lively, but the presence of teachers belonging to deficit schools wearing black badges was not something to be missed.

While government officials and Rymbui spoke about the contribution made by teachers and how efforts are being made to spread the use of technology while imparting education, the deficit schoolteachers were aggrieved that their pending arrears have remained elusive for months.

The teachers under the Khasi-Jaiñtia Deficit School Teacher’s Association (KJDSTA) and the Garo Hills Deficit School Teacher’s & Employee’s Association (GHDSTEA), around 4,000 of them, have been receiving their salary under the Fifth Pay Commission, but the government has only released 25 per cent of their arrears in December last year. The remaining 75 per cent, the government had said would be paid in equal instalments.

“According to the recommendation of the Fifth Pay Commission, we, deficit teachers should also receive the new pension scheme at par with government servants. We want the government to implement this. Although we have been showered with a lot of praises, we are facing difficulties as we receive our salary only once in three months,” Khongjirem said.

The deficit teachers also want the government to pay the death-cum-retirement gratuity according to the commission’s recommendation of Rs 10 lakh.

Rymbui said the government is trying its best to cater to the needs of all the teachers, including those in the deficit system. “Teachers are also stakeholders in the system. They should be patient as the government has decided that it would fulfil its commitments. Teachers should understand our constraints. I assure that as long as I am the education minister, we will try our best to ensure that such incidents (delay in releasing salaries/arrears) do not recur,” he said.

Rymbui said he was not looking for a “stopgap” solution, but a long term one to resolve issues related to the education sector.

On the demand of teachers to release the second quarter of their arrears, he said it was the government’s responsibility to clear the same.

To a query on rationalising the various categories of teachers, he said the government has collected all requisite data.

As the government sought patience, the teachers have hinted that they could announce other steps to ensure that their demands are fulfilled.