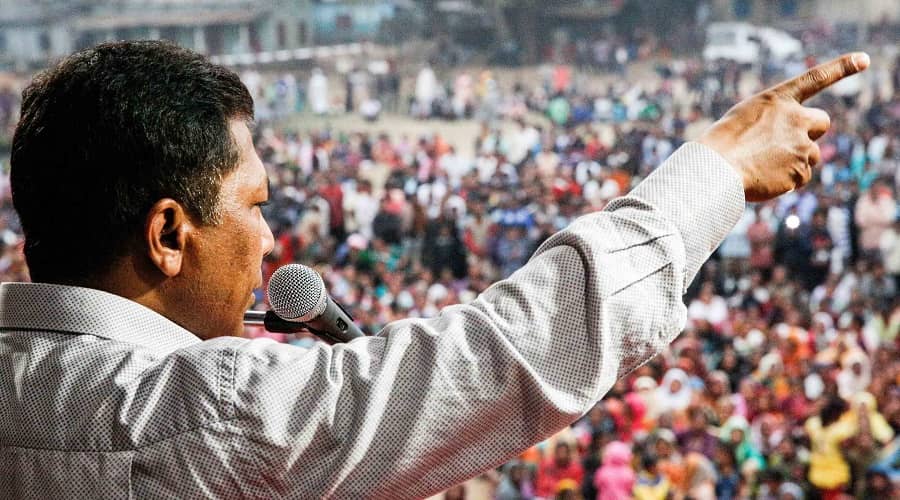 Twelve of the 17 Congress MLAs in the Meghalaya Assembly on Thursday joined the Trinamool Congress, dealing a body blow to the grand old party in the northeastern state, their leader and former chief minister Mukul Sangma said.

He said the decision to shift allegiance to Mamata Banerjee's party was taken after "exhaustive due diligence and analysis about how best to serve the people.

"The decision has been taken with utmost sense of humility, responsibility and commitment towards fulfilling our responsibility to the people, the state and the nation," he told at a press conference.

In a massive jolt to the main opposition Congress, they had decided to join the TMC in a late night development on Wednesday.

The breakaway group had also submitted a list of MLAs crossing over to the TMC to state Assembly Speaker Metbah Lyngdoh and informed him about their decision.

The development is a major boost for West Bengal Chief Minister and TMC supremo Mamata Banerjee, who has been trying to expand her party's footprint beyond her native state. During her recent visit to New Delhi Mamata welcomed two Congress leaders Kirti Azad and Ashok Tanwar into the TMC fold. Former JD (U) MP Pawan Varma too joined the Trinamul Congress.

The effort to take the Trinamul Congress footprint beyond Bengal is a project minted by Mamata's political strategist Prashant Kishor. The central assumption of the strategy is that the Gandhi-led Congress is in “irretrievable decline” and can, therefore, no longer be the pivot of the Opposition.

Kishor is convinced that the Bengal chief minister can become the axis around which an “effective and credible” opposition to the Narendra Modi-led government can be built, especially so after her emphatic victory in the Assembly polls this summer.

However, the Trinamul Congress chief during her interactions with the media on Wednesday sought to justify her foray into national politics, saying she was not out to “break” any political party and was offering help to other regional forces to take on the BJP. She mentioned Uttar Pradesh where polls are due next year.

“We are not breaking any party. If individual leaders want to join us and they feel Trinamul is fighting for the country, they are welcome,” she said, underlining that her party had opened units in Tripura, Goa, Haryana, Uttar Pradesh and Delhi.

The West Bengal CM who met Prime Minister Narendra Modi on Wednesday clarified she had no plans to meet Congress chief Sonia Gandhi during her trip bolstering speculations that Congress-TMC may not be on the same platform against the fight to oust the BJP in the 2024 Lok Sabha polls.