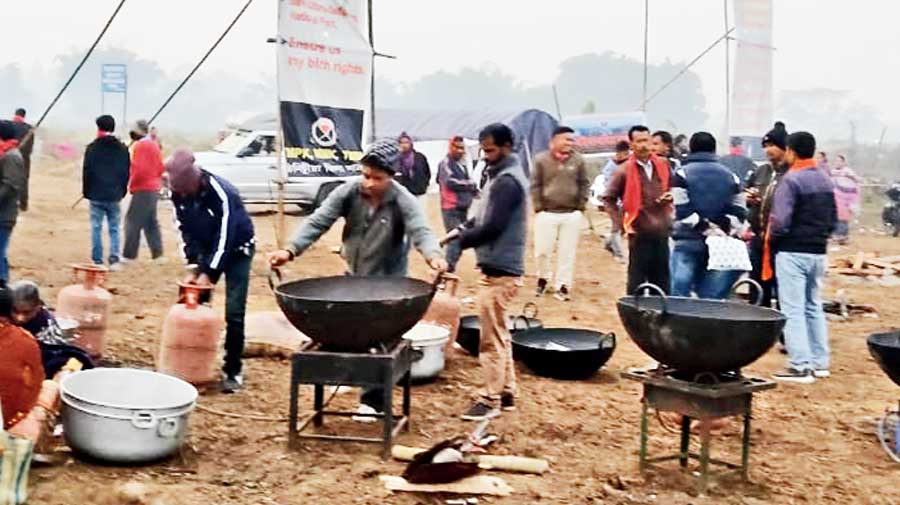 Villagers of Laika-Dodhia, who have been living in makeshift camps for the past 25 days near the Tinsukia deputy commissioner’s office in Upper Assam seeking permanent and proper rehabilitation, decided to suspend their dharna for a day to celebrate Bhogali Bihu on Thursday.

“We are taking a day off from the protest because of Bihu so that camp inmates could perform rituals associated with the festival. We will continue with our protest and also maintain our tradition. Our protest will resume on Friday,” Mintu Morang, chief convener of the Laika-Dodhia Rehabilitation Committee, told The Telegraph.

Magh or Bhogali Bihu is a harvest festival held in mid-January, celebrating nature and abundance which sees a lot of merriment and feasting for about a week. The rituals start with burning of the meji, a traditional bonfire of bamboo, wood, hay and leaves, early morning to seek the blessings of the god in the new year.

“Family members are visiting the camps while young ones sought the blessings of elders and performed other rituals. We also organised a small community feast of chira (flattened rice) and doi (curd), sweet potato and pork. We also lit the meji in the morning,” Morang said.

The camp inmates were joined by the president of the newly floated Assam Jatiya Parishad, Lurinjyoti Gogoi, in the evening. He has extended his support to the villagers’ demand.

The AJP, which will be contesting this year’s Assembly polls, sponsored a feast for the 1,500 inmates on Thursday night to mark Bihu.

The festive fervour at the camp was on display since Wednesday evening itself after the daily dharna from 10am to 5pm, with the youths and women in the camps preparing for Thursday’s festivities.

The district administration has also extended its support by making available chira and doi for the villagers. Lakhimpur MP Pradan Barua donated two pigs for the feast, Morang said. However, the usual feast on Uruka on Bhogali Bihu eve was not held.

Around 2,500 residents from seven villages, three under Laika in Tinsukia district and four under Dodhia in adjoining Dibrugarh district, have been protesting by living in makeshift camps since December 22 seeking permanent rehabilitation. They want to keep the protest going till they move to a new place as assured by the state government on December 31.

“We are not going anywhere till our 21-year-old demand is met,” Morang said.

Overall 1,480 families from seven villages were affected after the forest reserves under which they fall were converted into the Dibru-Saikhowa National Park in 1999. They were settled by the state government in these villages, dominated by the Mising community, after the massive 1950 earthquake.

“We cannot go back because we can't build anything permanent inside a national park. Government schemes are also not allowed,” said Prasana Narah, a camp inmate. So far, three protesters have died.

Amid the festive fervour gripping the state, three leaders of the Krishak Mukti Sangram Samiti and its student organisation — Bittu Sonowal, Dharjya Konwar and Manash Konwar — started a 48-hour dharna on Wednesday, seeking the release of their former colleague and newly appointed Raijor Dal president Akhil Gogoi and scrapping of the contentious Citizenship (Amendment) Act.

Dharjya said the protest was against the “fascist” BJP-led government which has “trampled democracy”, which is reflected with its “vindictive attitude” towards Akhil.

Akhil was arrested on December 12, 2019, when the anti-CAA movement was at its peak in Assam. Those opposed to the CAA say that it is a threat to Assam’s identity and culture.