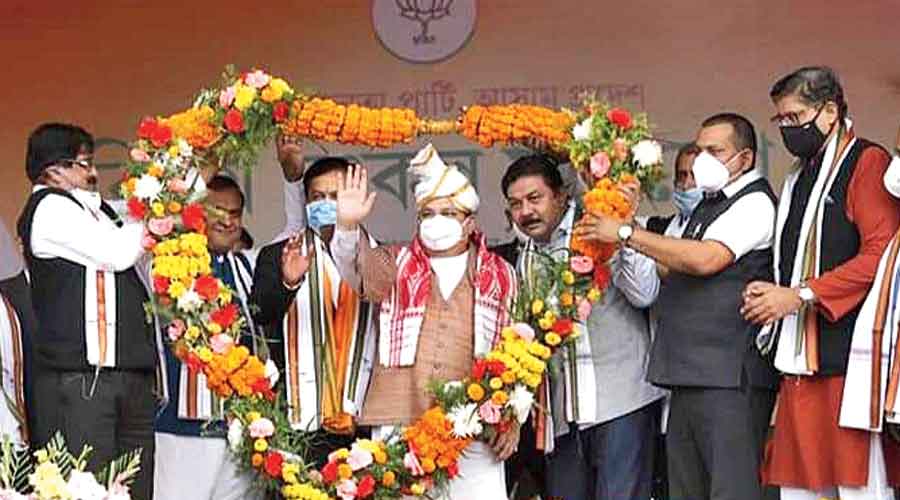 BJP national president J.P. Nadda on Monday said the ruling party was, is and will remain committed to protecting Assam’s culture, language and identity but remained silent on the Citizenship (Amendment) Act, just like Union home minister Amit Shah during his poll-oriented visit to the state in December last year.

Addressing a massive Vijay Sankalpa Samabesh at the Police Parade Ground in Silchar town in Cachar district, Nadda said: “ It is our responsibility... The BJP has always given due importance to the protection of Assam’s culture, language and identity. It is also working for the development of the state by ensuring the interests of all communities.”

Asserting it was the saffron party which had stood by the Assam Movement against illegal foreigners, Nadda said: “ It was Bharat Ratna Atal Bihari Vajpayee ji who raised the issue (Assam Movement from 1979 to 1985) both within Parliament and outside. He made it a national issue. The BJP stood by Assam.”

He also harped on the speedy development that has taken place under the Narendra Modi regime and also the accords signed for peace in the Northeast, including the Bodo and the Bru accords.

Though Nadda talked about preserving culture and identity, he was silent on the CAA, which makes it easier for non-Muslims from neighbouring Pakistan, Bangladesh and Afghanistan to acquire Indian citizenship.

Those opposed to the CAA say that the law is anti-Assam and is a threat to the very culture and identity the ruling party vows to protect.

On December 26 last year, home minister Shah, while launching the campaign for the 2021 Assembly polls in Guwahati, also harped on the development issues and targeted the Opposition but had also steered clear of the CAA, which is widely opposed in the state, except in most of Barak Valley.

Shah too had asserted on protecting and preserving the language, literature, culture and heritage of Assam while dwelling on the development of Batadrava Than, the birthplace of saint-reformer Srimanta Xankardeb, and naamghars (community prayer halls) as these were an integral part of the state’s culture.

The CAA was passed by Parliament in December 2019 but rules for its implementation have not yet been framed.

Assam chief minister Sarbananda Sonowal said on Monday that the ruling BJP will ensure the security of the Hindu Bengalis living in the state, now and forever.

“Let there be no doubt (about the security of Hindu Bengalis) since it was the party’s commitment,” Sonowal said.

But he too did not mention about the CAA which most believe will help regularise those who have illegally entered India till 2014.

Barak Valley, comprising three districts in south Assam, is dominated by a Bengali-speaking population. While Hindus enjoy clear majority in Cachar district, Hailakandi and Karimganj are Muslim-majority but with significant Hindu population. It has 15 Assembly seats, of which the BJP had won eight in 2016 and wants to win all this time.

Nadda, while highlighting the achievements of the BJP in his around 30-minute speech, said: “One should remember the development that has taken place under the BJP-led government... We have also given land pattas (documents), improved law and order and stopped trafficking. I am sure the party will retain power because of the all-round development taking place under the BJP-led government. Given the enthusiasm of the people, I am sure it will be BJP Plus (BJP and allies), 100 Plus (over 100 seats).”

The BJP president also said they had granted Scheduled Tribe status to six communities — Chutia, Koch-Rajbongshi, Matak, Moran, Tai-Ahom and Adivasi/tea tribes — without affecting the existing communities enjoying ST status. But representatives of two communities — Tai Ahom and tea tribes — said they were unaware of any such development.

“ It is news to us. We will have to check. We had sent a letter seeking to know whether the group of ministers submitted any report to the Centre to expedite the process in October as assured by them. We are yet to receive a reply,” chief spokesperson of the Tai Ahom Yuba Parishad, Gunakanta Gogoi, told this newspaper.

Rupesh Gowala, a tea community leader, too said he was unaware of such decisions till now.

Nadda flew to Guwahati from Silchar and held back to back meetings in connection with the ensuing polls.

The Assembly polls are due in Assam around April. The BJP had unseated the Congress in 2016 convincingly and has since won every election, enjoying an edge over its rivals.