It is our responsibility to express solidarity with the martyrs of anti-CAA movement: Dr Bhupen Deka 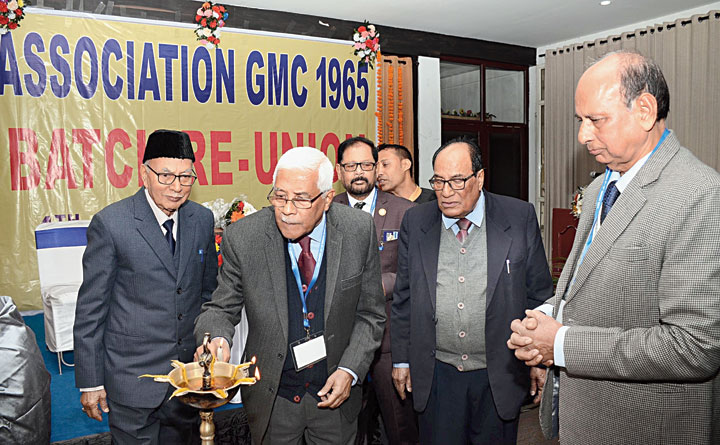 The 1965 batch alumni of Gauhati Medical College and Hospital (GMCH) paid homage to the martyrs of the ongoing anti–Citizenship (Amendment) Act movement during their reunion here on Saturday.

Around 70 doctors of the batch showed up with their family members during the reunion that took place at a city hotel.

The doctors welcomed each other and exchanged hugs and handshakes.

The get-together took place after a gap of 55 years since their first reunion was conducted. Doctors settled in the UK, the US, Australia and Qatar flew to the city to take part in the event.

The GMCH 1965 batch alumni from Calcutta and New Delhi also joined their Northeast counterparts. Most of the alumni had taken up surgery in their area of specialisation.

A medical education programme was held as part of the programme where the doctors discussed many diseases, especially cancer. Pros and cons of prostate cancer were discussed at length.

Former GMCH principal Dr N.N. Barman also attended the reunion. “It is a good feeling to be among my batchmates after such a long time. Some of them have passed away but I know they are among us today in spirit. I request the association to organise more such events. It is always a pleasure to see my batchmates doing well in life,” said Dr Debendra Nath Baruah.

A cultural programme enthralled the audience.