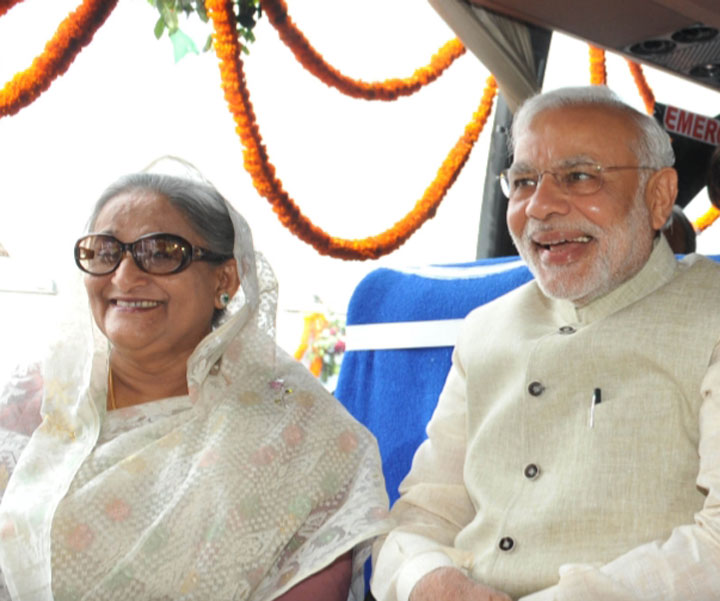 Prime Minister Narendra Modi and his Bangladesh counterpart Sheikh Hasina on Saturday announced that fencing of the international border between the two countries would be completed at the earliest while work on the construction of 12 more border haats would be expedited.

According to the India-Bangladesh joint statement during Hasina’s visit to New Delhi, she and Modi “Emphasised the importance of effective border management for ensuring a tranquil, stable and crime free border. Towards this goal, the leaders directed their respective border forces to complete fencing at all pending sectors at the earliest.”

The Prime Ministers appreciated the positive impact of the haats on the lives and livelihoods of the people living along the remote border areas. At present, there are four border haats — two each in Meghalaya (Kalaichar and Balat) and Tripura (Srinagar and Kamalasagar). “The leaders directed their officials to expedite establishment of 12 border haats which have been agreed to by both the countries,” the joint statement said.

Earlier, in addition to the four functional border haats, India and Bangladesh had approved six more border haats — two in Tripura at Palbasti and Kamalpur and four in Meghalaya at Bholaganj, Nalikata, Shibbari and Ryngku. The two countries also signed an agreement on withdrawal of 1.82 cusecs of water from the Feni by India for a water supply scheme for Sabroom town in Tripura.

Hasina highlighted that the people of Bangladesh are awaiting the implementation of the Framework of Interim Agreement for sharing of the Teesta waters, as agreed upon by both the governments in 2011. Modi said his government is working with all stakeholders in India for conclusion of the agreement soonest possible.

The Prime Ministers also inaugurated a project on sourcing of bulk LPG from Bangladesh to Tripura by using Bangladesh trucks, and hoped that such energy links will boost cross-border energy trade.

India and Bangladesh on Saturday welcomed a decision of inclusion of Sonamura-Daudkandi stretch of the Gomati river in Tripura as part of the India-Bangladesh Protocol route, a Press Information Bureau release said.

“Both Modi and Hasina underlined the immense potential of movement of cargo using the inland water. Towards this, they welcomed the decision to operationalise the Dhulian-Gadagari-Rajshahi-Daulatdia-Aricha route (to and fro) and include Daudkandi-Sonamura route under the Protocol on Inland Water Transit and Trade,” it said.