Flood situation in Assam critical as Silchar remains under water, toll rises to 108

Eight NDRF teams with 207 personnel were brought in from Itanagar and Bhubaneswar, while an Army team with 120 members was sent in from Dimapur 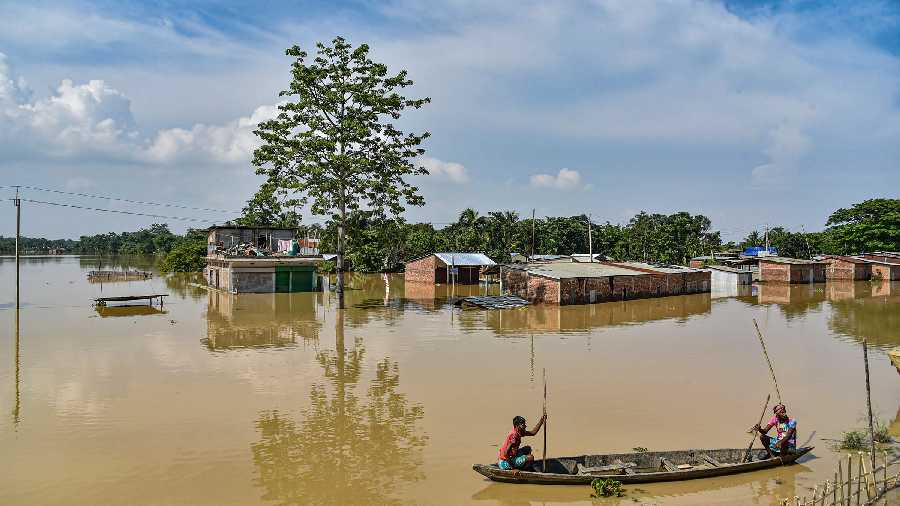 The flood situation in Assam was critical on Friday with with 45.34 lakh people reeling under the deluge, officials said.

The Brahmaputra and Barak rivers along with their tributaries are in spate, even as floodwaters started receding from a few areas, they said.

The toll rose to 108 with seven deaths reported in the last 24 hours, they added.

The situation in Silchar, considered 'Gateway to Barak Valley', is alarming with most areas still under water, a district official said.

The Assam State Disaster Management Authority (ASDMA) said that it has further expedited rescue and relief operations with additional resources deployed in the severely affected districts, especially Cachar where Silchar is located.

Eight NDRF teams with 207 personnel were brought in from Itanagar and Bhubaneswar, while an Army team with 120 members was sent in from Dimapur along with nine boats for the operations in Silchar, officials said.

Nearly 3 lakh people have been affected by an acute shortage of food, clean drinking water and medicines as almost the entire Silchar town is submerged in flood waters, officials said.

Food packets, water bottles and other essentials are being dropped by Air Force helicopters, they said.

The three districts in the valley -- Cachar, Hailakandi and Karimganj -- were severely affected by the rising waters of the Barak and Kushiara.

The worst-affected district is Barpeta where 10,32,561 people are suffering, followed by Kamrup where 4,29,166 people have been hit.

The devastating floods, caused by incessant rainfall, have affected 103 revenue circles and 4,536 villages. A total of 2,84,875 people have taken shelter in 759 relief camps across the state, it said.

The flood also damaged 173 roads and 20 bridges, while two embankments each were breached in Baksa and Darrang districts.

In all, 10,0869.7 hectares of crop area has been flooded. Largescale erosion has been reported from Baksa, Barpeta, Biswanath, Bongaigaon, Chirang and Dhubri districts, among others.

Worry over kin in Assam