On his 'Bihu moves' after taking a wicket, Riyan said it was an attempt to popularise the dance globally 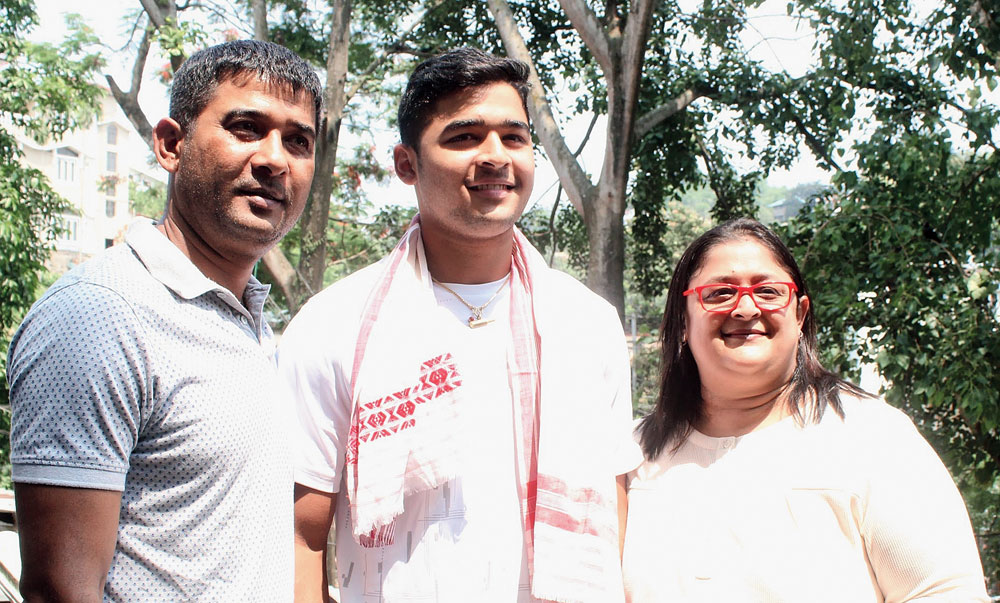 A festive mood prevailed on Tuesday at the home of 17-year-old Riyan Parag, who became the youngest player to score a half-century in the IPL.

If Riyan was busy attending to media queries on his star turn and efforts to popularise Bihu on the cricket field, his parents, former Ranji cricketer Parag Das and national-level swimmer Mithu Baruah, were also occupied with meeting well-wishers who came calling at their residence.

Mithu, who played a crucial role in shaping Riyan’s career, was excited that her son had come home after a long time.

Being a sportsperson herself, she follows all of Riyan’s matches closely, and flinched when a bouncer from Kolkata Knight Riders pacer Andre Russell hit him on the helmet.

“I got scared when he was hit but was relieved to see him ready to face the next ball. The way Russell bowls is terrifying but I’m sure Riyan doesn’t get scared,” Mithu told The Telegraph.

Mithu said her son will have more responsibility thrust on him going ahead. “He will have to work harder and be more disciplined. He will continue doing this,” she said.

Riyan arrived here on Monday evening. He said it was a “great” learning experience as part of Rajasthan Royals and also to contribute to the team.

On his “Bihu moves” after taking a wicket, he said it was an attempt to popularise the dance globally. “The idea of dancing Bihu after getting a wicket was mine. As some popular players like Dwayne Bravo and Kieron Pollard have different celebratory moves, I decided to perform Bihu. This is one of the most popular cricket leagues across the globe. I think my celebration will take Bihu to the world,” Riyan told reporters.

He also carries an Assamese gamosa during the matches instead of a towel to wipe sweat. “Several players and others asked me about the gamosa and about my Bihu moves. I’m happy to bring Assamese things to the limelight,” he said.

On stardom and future goals, Riyan said he needed to focus on his game and continue doing well in domestic tournaments. “I have always wanted to play for the senior team. I need to focus on the steps to reach there, the upcoming Ranji season and other tournaments, where I need to do well,” he said.

The teenager thanked his parents and Nabab Ali, a respected cricket coach in the city, along with well-wishers for helping him reach this stage.