Election were held in five of the 14 seats in the state, all of which are in Upper Assam 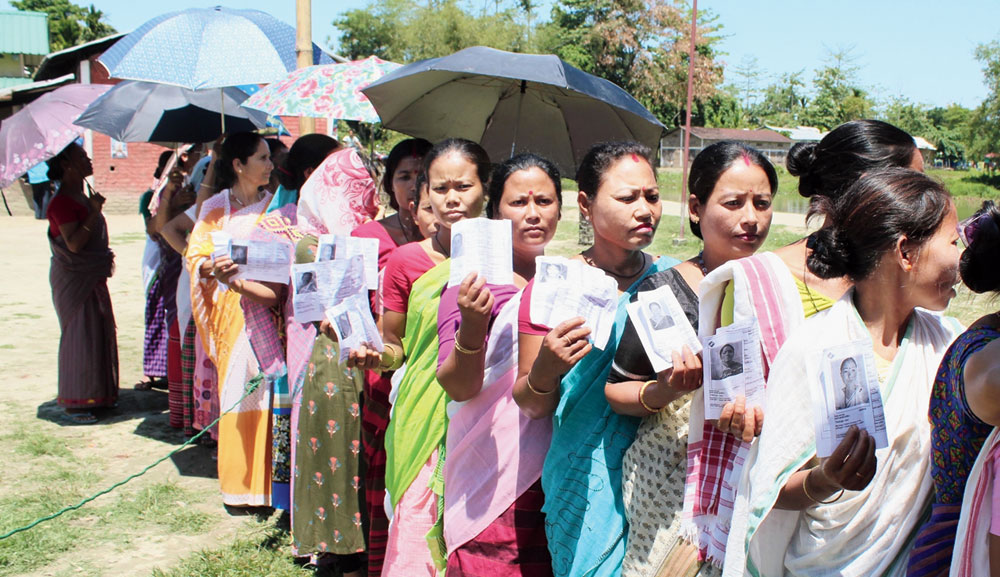 A polling official’s detention for misconduct, a woman voter being stabbed by her estranged husband and malfunctioning of electronic voting machines marked the first phase of Lok Sabha polls in Assam on Thursday.

Election were held in five of the 14 seats in the state, all of which are in Upper Assam. The polls were by and large peaceful.

Presiding officer of no. 74 polling station at Doigring tea estate primary school at Purabangla in Golaghat district under Kaliabor constituency, Sailen Neog, was taken for a medical check-up and then detained at Numaligarh Refinery police outpost after voters complained that he was inebriated.

Neog, a lecturer at Sarupathar College in Golaghat district, was reported for misconduct around 1pm before being picked up by the police. He was replaced by two presiding officers.

In another incident, Anjuma Begum, 25, of South Chandmari village, was stabbed with a pair of scissors by her estranged husband Nabir Hussain, 30, of Bartow while she queued up at Somadiri Bartow polling booth in Lakhimpur town around 10.30am. The gathering at the booth with the help of police caught Hussain and tied him up. Anjuma was rushed to Lakhimpur civil hospital.

Anjuma had left Hussain last year and got married to neighbour Moju Ali. Hussain too married another girl. Hussain, who was arrested, said Anjuma, in connivance with Moju’s family, filed a case against him accusing him of rape, for which he had to spend three months in jail. The two families also had an altercation over the incident on Wednesday, Hussain said.

There are reports of EVMs malfunctioning in some booths in Golaghat, Lakhimpur, Tinsukia and Sonitpur districts.

Voters complained of EVMs recording votes in favour of only one party in some booths in Tezpur constituency, while others in Lakhimpur constituency discovered the machines in some of the booths like no. 165 East Dhemaji Town High School were not reset after mock polling.

In Golaghat district, voters complained of EVMs going out of order in at least eight booths after working for some time. Voting was suspended for half-an-hour to an hour till the faulty machines were replaced. Although polling officials requested voters to queue up again and cast their votes, most of them refused to do so.

An unruly situation also prevailed in some polling stations in Jorhat and Tezpur constituencies. While supporters of the Congress and the BJP clashed in Jorhat district, voters who turned up late

created a scene at no. 46 booth at Nirmanibari in Gohpur area.

Confirming the development, Sonitpur deputy commissioner Narsing Pawar told The Telegraph that a few voters turned up after 5pm and forced the polling officials to reopen the booth. The polling officials, however, refused to budge leading to heated exchanges.

In Jorhat, Congress supporters objected to Jorhat Municipal Board ward member Ankur Gupta of the BJP serving aerated drinks to voters in the queue at Kachariparia LP School booth, leading to an altercation.

Elections were held in Lakhimpur, Dibrugarh, Jorhat, Kaliabor and Tezpur parliamentary constituencies, where voters sealed the fate of 41 candidates.

The candidates include political heavyweights like Paban Singh Ghatowar of the Congress in Dibrugarh and Assam ministers and BJP candidates Pallab Lochan Das in Tezpur and Topon Kumar Gogoi in Jorhat.