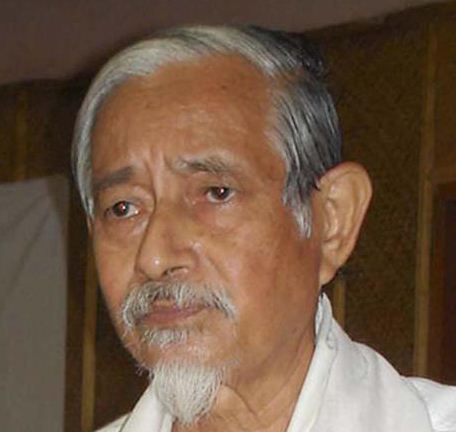 The Opposition Congress on Saturday reached out to Hiren Gohain (above) and his Forum Against Citizenship Act Amendment Bill.
The Telegraph picture
Our Special Correspondent   |   Guwahati   |   Published 26.01.19, 06:35 PM

The Opposition Congress on Saturday reached out to Hiren Gohain-led Forum Against Citizenship Act Amendment Bill and also decided to send a combined delegation of Assam PCC and Congress Legislature Party (CLP) leaders on Wednesday to meet AICC president Rahul Gandhi over the contentious bill.

AICC general secretary in-charge of Assam Harish Rawat, PCC president Ripun Bora and CLP leader Debabrata Saikia were present at the meeting with the Forum which was held late on Saturday evening.

On Friday, the Congress had held a two-hour meeting with the KMSS and 69 other organisations, during which it conveyed its opposition to the bill and said how it planned to tackle the issue when it comes up in the Rajya Sabha during the budget session starting from January 31.

Forum convener Manjit Mahanta said, “The meeting was on the bill and what will be their role in the Rajya Sabha. They (Congress) wanted to meet us.”

The bill was passed by the Lok Sabha and the BJP-led Centre will now try to push it in the Rajya Sabha where it does not have a majority. The role of the Congress and non-NDA parties can derail the BJP’s bid.

Gohain, Mahanta and KMSS adviser Akhil Gogoi have been booked for sedition, but they got bail from the court.

The KMSS had on Friday wanted to meet the Congress leaders and sought its support in opposing the bill in the Rajya Sabha. They also wanted a meeting with AICC president Rahul Gandhi.

Saikia, who had attended Friday’s meeting, said the Congress was opposed to the bill and would remain so. “We conveyed to them that our AICC in-charge (Harish Rawat) represented the high command and our stand will remain anti-bill in and outside Parliament,” he said.

On Saturday, the Congress met Gandhian Hem Bhai and held a meeting on how to reach out to various indigenous groups, PCC general secretary Pradyut Buyan said.