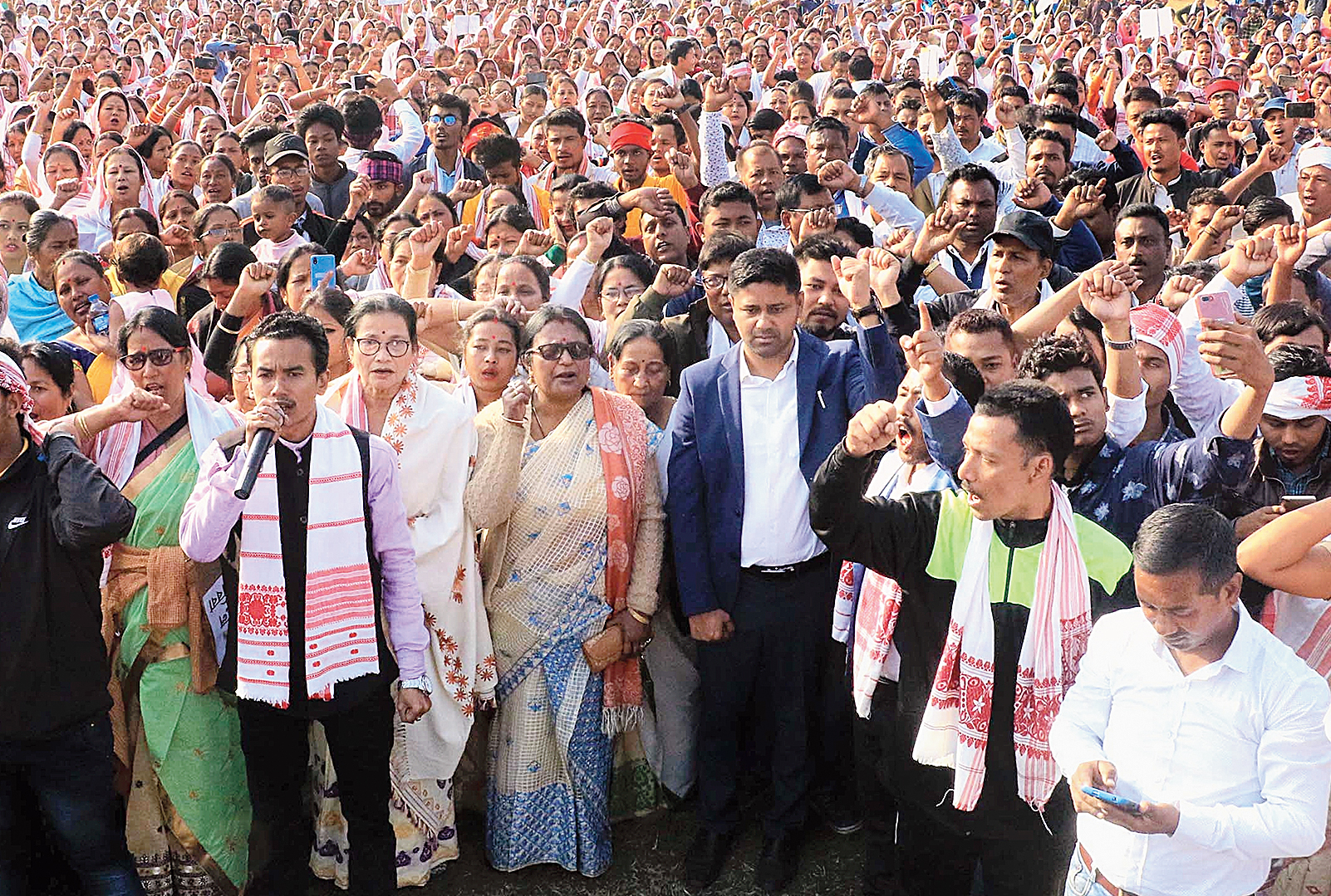 Protesters shout slogans during a demonstration against the citizenship act at Namrup in Assam’s Dibrugarh district on Sunday.
Picture by UB Photos
A Staff Reporter   |   Guwahati   |   Published 22.12.19, 09:03 PM

The winter chill could not prevent writers, intellectuals, political leaders, xatradhikar and common people from hitting the streets once again across Assam on Sunday, opposing the Citizenship (Amendment) Act, 2019.

In a three-hour silent protest here, writers and intellectuals sent the message to the government that the people of Assam will never accept the CAA. The protest on Sunday continued despite a slew of decisions by the Assam cabinet on Saturday for protection of Assamese language and development of various communities of the state.

The writers and intellectuals who participated in the protest here under the banner of the Asom Nagarik Samaj included Hiren Gohain, Homen Borgohain, Lakhinandan Bora, Rong Bong Terang and Apurba Sarma, most of whom had served as presidents of Asam Sahitya Sabha.

In the morning, thousands joined a padayatra launched by the state unit of the Congress at Sadiya in Tinsukia district to protest against the CAA. The participants marched for around 20km and reached Doomdooma. The march will culminate in Dhubri district next month. En route, Congress workers and leaders will try to make people aware of the “harmful” aspects of the Act.

PCC president Ripun Bora, leader of the Opposition in the Assembly Debabrata Saikia, along with other party leaders like Rakibul Hussain, participated in the march.

“The participants of today’s meeting have clearly indicated that Assamese people will never accept the CAA. The Congress is always with the people and will continue to be with them,” Bora said.

The Darrang unit of the Asam Sahitya Sabha, along with several other organisations of the district, protested demanding the CAA be scrapped. The Sabha’s general secretary Padum Rajkhowa said the state cabinet’s decisions to push for making Assamese the state language is nothing but a “dream” created by the government for the people to stop the momentum of anti-CAA protests.

The AASU and 30 organisations of different communities, which have been spearheading the movement against the CAA, announced a three-hour protest from 11am on Monday at public places across the state. In Guwahati, the protest will be held at Latasil playground. AASU said the decisions of state cabinet were rights of the people and would not affect the anti-CAA protests.

The hunger strike of Priyada Gogoi, 72, mother of KMSS adviser Akhil Gogoi, continued for the third day at her home in Jorhat district, demanding release of her son. Akhil has been booked under the Unlawful Activities (Prevention) Act and is in the custody of National Investigation Agency (NIA).

A statement signed by over 50 writers, social activists and senior journalists on Sunday demanded “immediate and unconditional” release of Akhil. They expressed “deep outrage and sense of disturbance” at the way Akhil has been treated by the government.