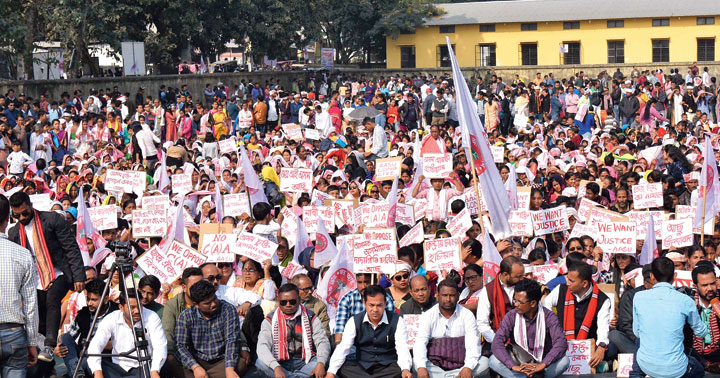 The Bodoland Territorial Area Districts (BTAD), a Sixth Schedule area exempted from the purview of the Citizenship (Amendment) Act, 2019, saw a massive protest against the law on Thursday.

Over 10,000 people, old and young, draped in ethnic outfits and donning gamosas, converged at Tangla Higher Secondary School playground in Tangla town in Udalguri, one of the four districts of BTAD in lower Assam, in response to the call by the All Assam Students’ Union (AASU) and 30 allied organisations not to accept the “anti-Assam” CAA.

The protesters raised slogans against the Act and the BJP-led government for supporting the law.

Speakers at the Gana Bikhuph (mass protest) rally, organised by the AASU and the artiste fraternity, said the Act had been rejected by the people of Assam as it was detrimental to the pluralistic culture in the land of Sankar-Azan (Vaishnavite saint Srimanta Xankardeb and Sufi poet Azan Fakir).

The rally is significant because thousands turned up in a CAA-exempted area, reflecting the people’s concern even in areas where outsiders are not allowed to buy land. A few anti-CAA protests have taken place in the BTAD but nothing of this scale so far.

AASU general secretary Lurinjyoyi Gogoi said the government was making every possible effort to douse the protest but it wouldn’t work. “Vice-chancellors of universities have been asked to ensure that students keep away from the protest. But no threat or enticement will work. We will continue to protest till the law is scrapped,” he said.

He told The Telegraph, “The rally received huge support as there is concern even in areas covered by the Sixth Schedule and inner-line permit. Garo hills (Sixth Schedule) in Meghalaya and Arunachal Pradesh (ILP) are hit by influx. Every year in Arunachal, there is drive to rid the state of ‘foreigners’. It shows that no area is safe. We will never accept this unconstitutional Act which is detrimental to the indigenous people of Assam and will give constitutional safeguards to foreigners on religious lines.”

Singers Zubeen Garg, Manas Robin, Bipin Chowdhung and actor Pabitra Rabha, among others, took part in the protest. They sang revolutionary numbers and exhorted the people to stand united against the radical forces who are trying to impose the Act.

Mocking the government’s decision to provide a one-time grant of Rs 50,000 each to artistes and technicians, Zubeen said he helped the needy with a larger amount every day. He said enticement would not deter the people as baits were meant for fish, not humans.

Referring to thegrant of citizenship to foreigners, he said, “Export and import are meant for goods, not humans.” He concluded by saying, “I will not say much as my words are often misinterpreted, stirring controversy.”

AASU president Dipanka Kumar Nath said, “The Sixth Schedule areas and northeastern states having ILP have been exempted but not the Brahmaputra and Barak valleys. This is hypocrisy at its worst. If CAA is bad for ILP and Sixth Schedule areas, how are the valleys safe?”

He said the worst part of the Act was that foreigners eligible for citizenship need not produce documents as valid proof of entering the state prior to December 31, 2014. “This implies that any foreigner, irrespective of date of entry, would be granted citizenship,” he added.

He appealed to the people not to be swayed by peace rallies organised by “crows” supporting CAA and exhorted students to pursue their education as this protest will continue for long.

Singer Bipin Chaudang said, “The artiste fraternity has joined hands with Assamese society to give a wholehearted fight against the Act. Burning tyres can be doused by pressing fire tenders into service but the fire ignited in the mind of every Assamese will continue to burn till the Act is withdrawn.”