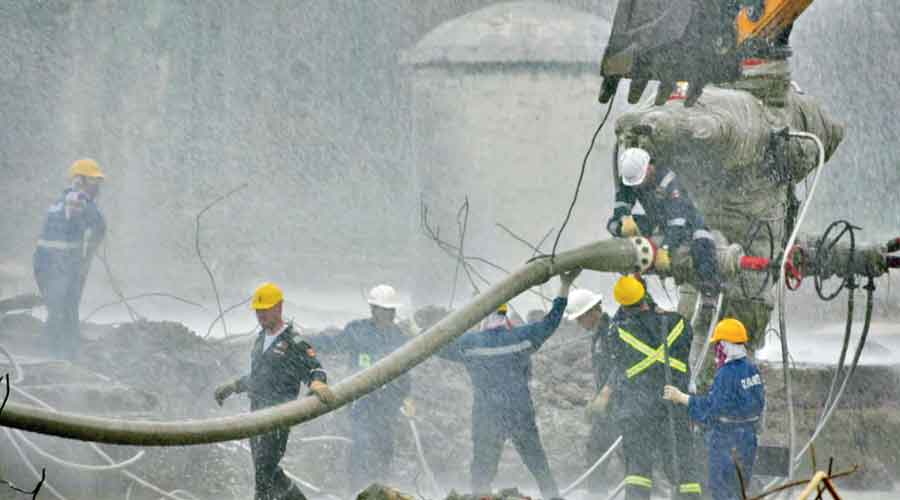 Hope turned into despair for both Oil India Limited’s field personnel and the blowout-hit as the operation to kill the Baghjan gas well failed on Tuesday afternoon.

OIL suffered another blow as four of its seniormost officials, including the chairman-cum-managing director S.C. Mishra, tested Covid positive on Tuesday, leaving the energy major in a spot because they were actively involved in the day-to-day operations to cap-and-kill the well, an official told The Telegraph.

“After the successful capping operations on Monday by placing the blowout preventer on the wellhead, our efforts to kill the well failed today because an underground casing valve ruptured and thus the kill fluid (liquid mud) did not reach its intended destination to stop the flow of gas,” OIL official Tridiv Hazarika said.

The operation to kill the well in Upper Assam's Tinsukia district, about 530km east of Guwahati, involves injecting killing fluid into the well to stop the uncontrollable flow of natural gas from the reservoir.

The well suffered a blowout on May 27 and caught fire on July 9. Killing the well will stop the fire at the wellhead.

The experts will decide the future course of action on Wednesday afternoon. “We will know what will happen or the road ahead only tomorrow after assessment by experts,” Hazarika said.

Locals who were near the site during the killing operation said that fire stopped for about 15 minutes.

“ There were smiles all around. All of a sudden there was no fire, no sound. OIL people, journalists, all were happy. But it was shortlived because the well flared once again,” Hemanta Moran, who was at the site,  told this correspondent over phone.

The brief silence, said Moran, had seen the many of affected people at the relief camps rushing to the well site while others started packing so that they could spend the night at home.

“But it was shortlived. The despair was palpable. We don’t know how long we will have to wait,” he said.

On Monday, OIL managed to cap the May 27 Baghjan gas well blowout after 83 days and two unsuccessful attempts, triggering all-round relief. But the relieved OIL personnel were not celebrating because the work was only half done.

The blowout had affected over 8,000 people and left two OIL firefighters dead.

OIL had last suffered a blowout in 2005, which took 45 days to cap, with the help of foreign experts.

Court directive: In a development related to the OIL, the Gauhati High Court on Monday gave time till September 30 to the energy major, petroleum ministry, environment ministry, Dispur and Delhi, among others, to file para-wise reply to the PIL 35/2020 filed by advocate Mrinmoy Khataniar and mountaineer Amarjyoti Deka. The PIL had challenged the awarding of seven hydrocarbon oil wells in an around Dibru Saikhowa National Park, which includes Baghjan well No 5 which suffered the blowout. The petitioners feared that the ecology of the area would be adversely impacted.

The PIL was filed before the Baghjan blowout.