Most of the over 8,000 residents affected are becoming 'extremely short-tempered, ill-mannered and quarrelsome' 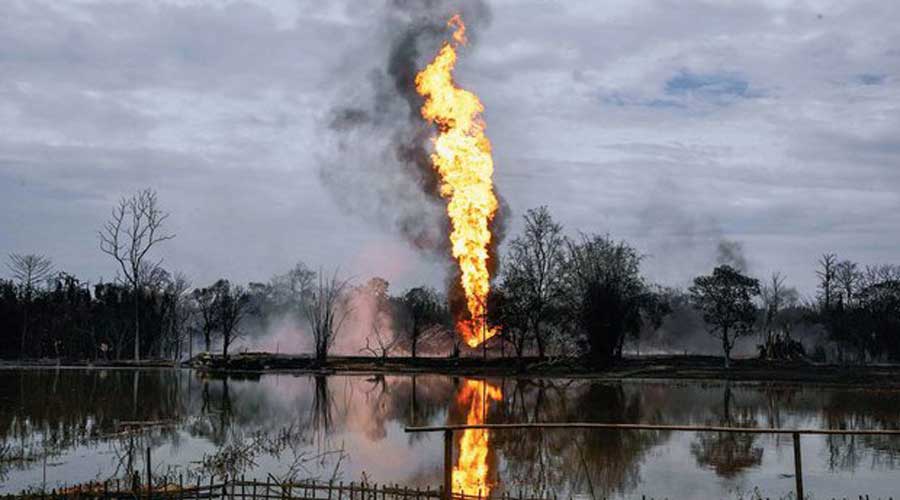 A youth organisation representing blowout-hit people at Baghjan in Assam has apprised the National Green Tribunal that the affected are experiencing “extreme mental agony and physical discomfort” due to continuous high-decibel sound and ground vibrations, with most becoming “extremely short-tempered, ill-mannered and quarrelsome.”

An Oil India Limited (OIL) gas well at Baghjan in Tinsukia district suffered a blowout on May 27. Subsequently, the well caught fire on June 9.

Over 8,000 residents and the nearby wetland and Dibru Saikhowa National Park were affected and more than 3,000 people are still living in relief camps, about 1.5km from the well.

The Baghjan Gaon Milanjyoti Yuva Sangha, representing the local populace in talks with the administration for compensation and rehabilitation, had in a five-page representation to the NGT on Tuesday mentioned the issues “bothering” them.

These include an apparent behavioural change, with an appeal for a just, adequate and speedy compensation to the affected. The representation was signed by the Sangha’s top brass and the village headman.

“Due to tough living conditions and shattering of otherwise peaceful living prior to the blowout incident, it has been observed that most people are experiencing some sort of mental and physical issues. They have become extremely short-tempered, ill mannered and quarrelsome...this psychological angle of the affected people should not be neglected. Pregnant women, too, are complaining about discomfort level and we are extremely worried about the unborn children,” the representation said.

Sangha president Satyajit Moran said that the petition also conveys the impact on students and suicide of Sukleswar Neog on July 18 due to his “inability” to cope with extreme mental pressure from the blowout and “lack of adequate support” from OIL.

“...We fear all of us are staring at some serious future ailment due to this exposure to high decibel sound for such a long time. Many people are on the verge of losing their hearing power/ability... Due to this unbearable sound, the ambience for children to study has totally disappeared,” the representation said.

Hemanta Moran, Sangha adviser, told The Telegraph that most people started displaying behavioural changes after a month of the mishap.

“Living in relief camps for such a long time with no change in the sound level or tremors is taking its toll. The damage to Maguri Motopung water body on which most depend for their livelihood has added to the worry,” he said.

One of the changes affecting almost everyone is that conversations among themselves have become high-pitched. “To beat the high decibel sound emanating from the well, we have to raise our voices,” Moran said.

He requested the authorities and NGT to ensure that some sort of counselling is provided to the affected at the earliest.

The Sangha has urged putting in abeyance all sorts of production activities of OIL in the area till the energy major pays adequate compensation to people of Baghjan and ensures their safety.

It has sought employment for eligible people of each family, efforts to check soil erosion in the Baghjan-Digholtorong area and Rs 50 lakh insurance cover for each Baghjan resident.

Moran said they have also sought effective bio-remediation measures for both Maguri Motapung wetland and Dibru Saikhowa National Park with the help of an established company having experience of dealing with condensate-related contamination of ground and water pollution.