Assam wants fresh scan on a part of NRC 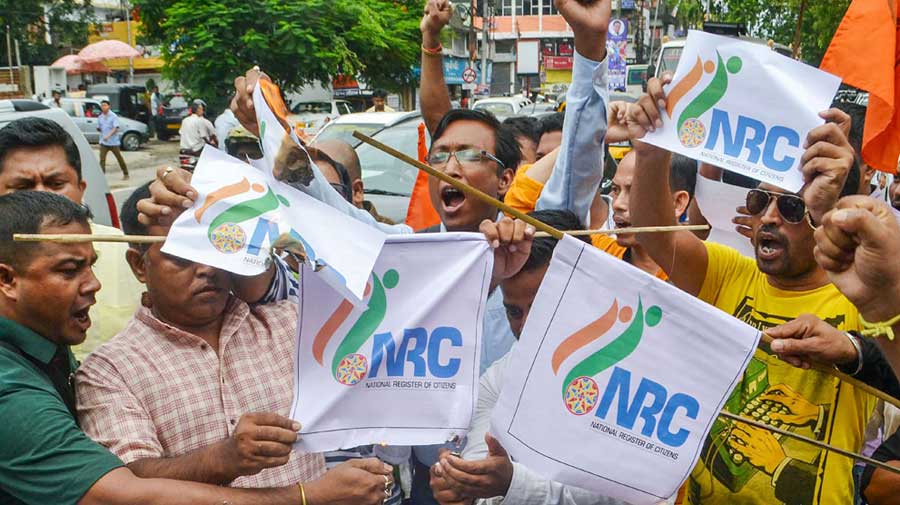 The Assam government has said that it is “strongly in favour” of re-verification of 20 per cent names included in the updated National Register of Citizens (NRC) from districts bordering Bangladesh and 10 per cent from the remaining districts.

Senior cabinet minister Chandra Mohan Patowary made this assertion in response to a query by Congress MLA Sherman Ali Ahmed on the first day of the four-day Assembly session which began on Monday.

The 1951 NRC is being updated in Assam, which has had a longstanding influx issue. Assam is the only state to have the 1951 NRC. The cut-off mark for inclusion was March 24, 1971, as fixed in the 1985 Assam Accord, an outcome of the six-year-long Assam Movement against influx.

Issues related to the 1985 Accord and the NRC update dominated the House proceedings on Monday.

Ahmed had asked, among others, whether rejection slips are being issued by NRC authorities and if there is any timeframe for completing the entire process.

The process has been kept on hold due to the Covid-19 pandemic and the flood situation in the state, he said.

The senior minister then said the state government had moved the Supreme Court, which is monitoring the update, in July 2019 seeking a direction for 20 per cent sample re-verification of names included in the draft NRC in districts bordering Bangladesh and a 10 per cent sample re-verification of names in the remaining districts.

Patowary then revealed that the “state government continues to remain strongly in favour of such re-verification”.

The Supreme Court had, however, rejected the re-verification pleas of both the state and the central governments.

The districts bordering Bangladesh are Karimkanj and Cachar in Barak Valley and Dhubri and South Salmara-Mankachar in lower Assam.

The length of the Indo-Bangladesh border in Assam is 267km.

Applicants who did not make the updated NRC list can challenge their exclusion in the foreigners tribunals after getting the rejection slips which would mention the reason for their non-inclusion. The excluded were directed to move the tribunals within 120 days of the publication of the final list but till date, according to the government, no rejection slips have been issued.

Patowary also said there was “no specific timeframe for completion” of the whole process yet. He also said 100 foreigners tribunals are functioning in the state.

Patowary also said no genuine citizens would be left out of the NRC and no illegal migrants included in the list.

He also said despite opposition to the Citizenship Amendment Act, not a single Bangladeshi citizen had entered any of the state’s 26,000 villages.

Like the state government, Assam Public Works, an NGO, whose petition in the apex court led to the update of the 1951 NRC, too reiterated on Monday its demand for re-verification of the updated list.

Congress MLA Rupjyoti Kurmi targeted the government over the implementation of the 1985 Assam Accord and coronavirus.

He had to be suspended for sometime after he did not heed the Speaker’s request not to disrupt proceedings. Outside the Assembly, Kurmi said he was expelled because he was “raising” the voice of the people of Assam.

All Assam Students’ Union general secretary Lurinjyoti Gogoi told The Telegraph they were and are still firm on an “error-free NRC” where “no Indian is left out and no foreigner included”.

Krishak Mukti Sangram Samiti president Bhasco De Saikia said Dispur should display its sincerity by involving all stakeholders and publish the NRC in a time-bound manner instead of using the “NRC as a political tool” because the exercise was initiated to rid Assam of illegal foreigners.

The Asom Jatiyatabadi Yuba Chatra Parishad (AJYCP), a youth organisation at the forefront of the anti-CAA movement along with the AASU, said the state government should now initiate steps to complete the NRC process in a time-bound manner.