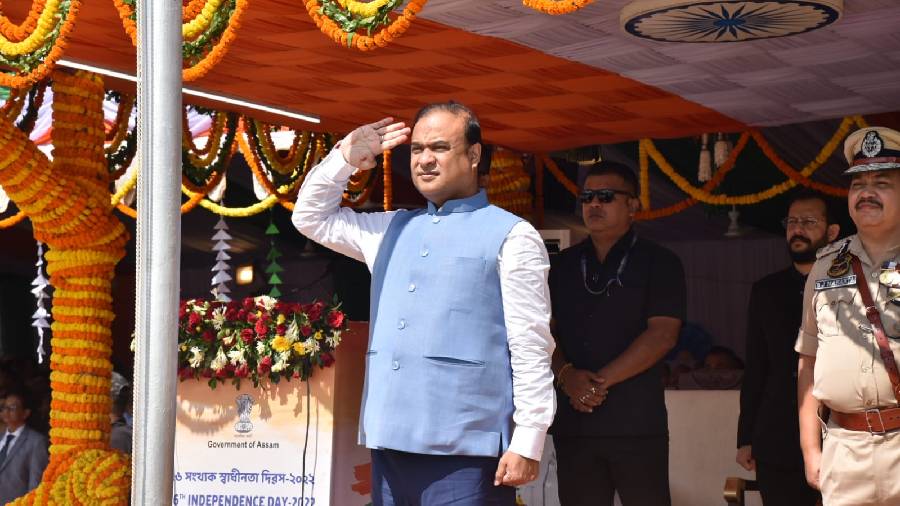 Assam Chief Minister Himanta Biswa Sarma on Monday announced that his government will withdraw 'one lakh minor cases', including some involving social media posts, to reduce burden on lower courts.

He also declared a slew of measures to strengthen education, healthcare, agriculture and other sectors in the state.

Hoisting the national flag at the 76th Independence Day programme in Guwahati, Sarma said that there are about four lakh cases pending in the state's lower courts.

"The government has decided that one lakh minor cases registered before the midnight of August 14, 2022, will be withdrawn," he said.

"This will enable the judiciary to focus on more heinous crimes such as rape and murder," he stated.

The chief minister also said that if any innocent person is languishing in jail due to lack of access to lawyers, prompt release of such individuals will be ensured.

Asserting that Assam is an integral part of India, Sarma said that those who are still dreaming of "sovereignty" should return to the discussion table.

"Sovereignty is non-negotiable and Assam will never leave India," he said, in an apparent message to militant groups ULFA(I) and NSCN who have called for a "boycott" of Independence Day celebrations and "total shutdown" in five northeastern states, including Assam.

The mass participation in the 'Har Ghar Tiranga' programme in the state since Saturday has brought to fore the patriotic feelings that is inherent in each person's heart , the chief minister said.

"The love people displayed for the Tricolour over the last three days proves Assam is always with India," Sarma said.

"Hope those who are still dreaming of sovereignty will return to the discussion table and work together for the development of the state," he said, affirming that people of Assam do not support terrorism .

Elaborating on the measures taken by his government in the last one year, the chief minister said that thrust will be given on sectors such as connectivity, healthcare, education and agriculture.

He also said that a universal health insurance plan will be rolled out in the state to include all those who may have been left out of existing government schemes.

He announced that 10,000 crore would be allocated for infrastructure development of high schools and higher secondary schools, and opening of 15,000 new Anganwadi centres.

Expressing solidarity with flood victims, Sarma said monetary compensation for people whose houses were damaged in this year's flood will be disbursed by August 20.

Referring to a recent incident of a man denied last rites as per Hindu rituals over a caste issue in Mangaldai, Sarma said that while the incident should be condemned, reformation is the key to move forward.

"Caste system is pulling our society backwards. Assam can take the lead in moving away from such a system," he added.

Emphasising on need for humane touch in all spheres of life, the chief minister said that the state government will sanction 'three days' additional leave to its employees in January next year to enable them to spend time with their parents.

Appealing to public to not engage children in labour, he said that the government will come up with amendments to an existing law for more stringent punishment for people who do so, adding that a social movement is more important to fight this problem.

The chief minister also harped on importance of water conservation and urged each citizen of the state to plant at least one sapling, naming it 'amrit briksha'.

"I hope that we can take Assam to new heights in the next 25 years," Sarma added.