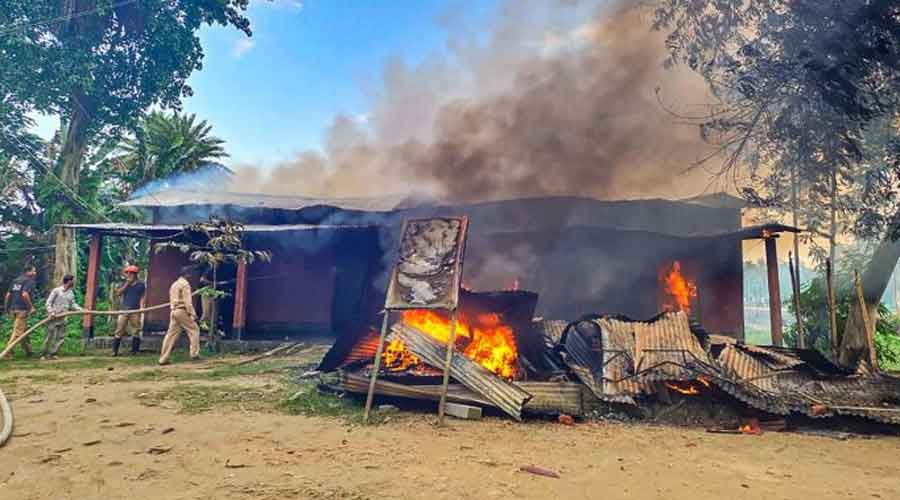 The AAMSU, which espouses the cause of students belonging to the religious and linguistic minority community, also moved the Assam Human Rights Commission (AHRC), seeking a probe into the Batadraba incident.

AAMSU general secretary Md Imtiaz Hussain told The Telegraph they had made a detailed submission in a four-page petition to acting chief justice of Gauhati High Court Nongmeikapam Kotiswar Singh, requesting a judicial probe into the entire matter against those guilty of “violating” human rights as guaranteed under the Constitution and for “challenging” the rule of law by “committing arbitrary and extra judicial killings and for every other illegal actions that took place”.

Hussain said the probe needed to cover the custodial death of fish vendor Safiqul Islam, 38, on May 20 and the subsequent burning down of Batadraba police station in central Assam’s Nagaon district the same day by a mob.

The Opposition Congress and the AIUDF had also demanded a judicial probe by a sitting high court judge but this is the “first” formal move towards this end.

The police have instituted a special investigation team to probe the arson case. A separate probe by an additional SP has also been initiated into the death of Safiqul, 38 that triggered the entire chain of events.

Minority-dominated Batadraba is situated around 15km away from Nagaon town and is the birthplace of revered Vaishnavite saint Srimanta Sankardeva.

The students’ organisation, in its petition, cited police “brutality” that led to the “custodial deaths” and “infringement” of human rights as guaranteed under Article 21 of the Indian Constitution.

The AAMSU said Safiqul’s death happened as a result of “non-payment of bribe” as alleged by his family members and local residents. “Custody of Safiqul Islam during night hours in the absence of any FIR and any criminal act committed by the deceased was an arbitrary and illegal action of the police.

No members of his family were informed about his detention and the reason behind it. Injury marks were seen on the chest of the dead body, which further raises doubts of brutal police atrocities,” the petition to chief justice Singh said.

The plea also dubbed the use of bulldozers and destruction of houses as “an illegal act, arbitrary, undemocratic and unconstitutional to the core”. Further torturing the family members of the alleged offenders and forcing them to live in the open along with young children without food and a roof over them is an “extreme violation of human rights” guaranteed under the Constitution, the plea added.

The Nagaon district administration had carried out an eviction drive in which five homes, including that of Safiqul and his relatives, were demolished. The police initially claimed they were encroachers but later said the houses had to be demolished to search for hidden arms. However, residents said the affected had valid land papers.

AAMSU said the death of Asiqul, a higher secondary student, was “actually a part of the many extra judicial killing that took place over the last year” and the police version of him dying in a road mishap while trying to escape by jumping out of the police vehicle he was being ferried back after a search operation “is unacceptable”.

“The question remains why Ashiqul who had surrendered at his own will again try to escape. Secondly, why a criminal was not handcuffed and was allowed to seat in the edge of the vehicle facilitating him to jump. Actually the modus operandi adopted to kill Ashiqul Islam was also adopted in the earlier cases of extra judicial killings by the Assam police over the last year. As such the entire version of the police is cooked up, fabricated and well designed to avoid the ire of law,” the AAMSU said.

According to a lawyer from Guwahati, who is seeking a high court-monitored CBI or SIT probe into the alleged custodial deaths and other police actions since the BJP-led state government took charge in May 2021, the number of such deaths has touched 48 with the death of Asiqul.

The state government in its response to the lawyer’s plea filed in the high court in December said 28 alleged accused had died in police action and another 73 injured till January 27.

Hussain said they had also moved the AHRC, seeking a thorough inquiry into all aspects of the Batadraba incident on the same grounds cited in its petition to the high court because custodial deaths, destruction of houses and subsequent extra judicial killing are “unconstitutional, arbitrary and against the virtues of a civilised society”.