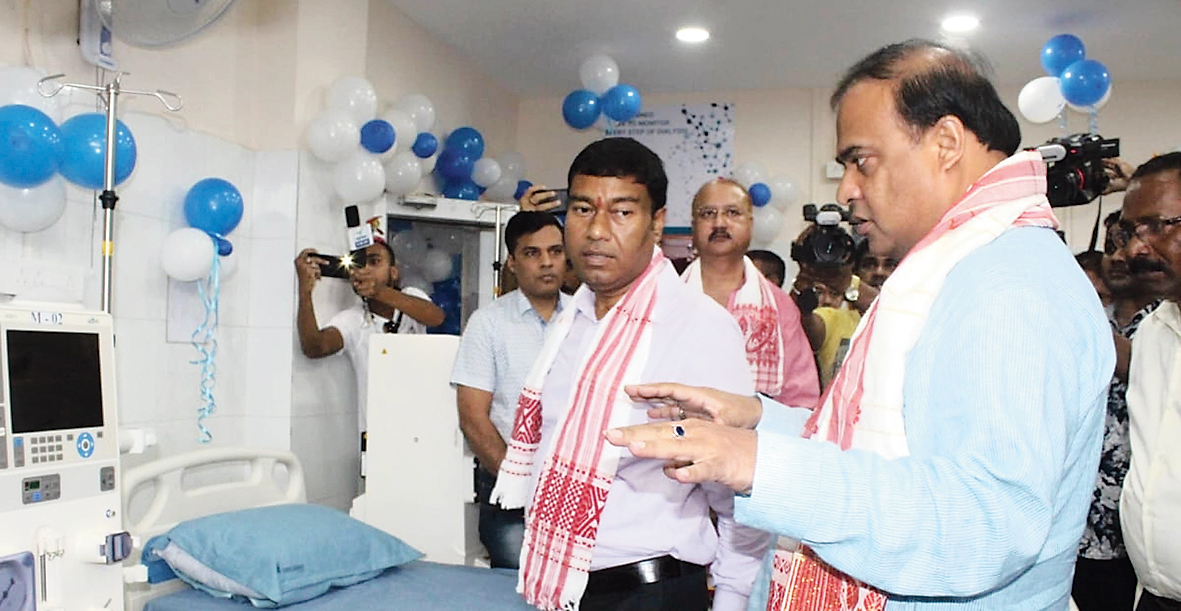 A mother and child care wing and a kidney dialysis unit were inaugurated by health minister Himanta Biswas Sarma at the new building of the civil hospital here on Sunday.

The three-storeyed building houses 100 beds, including a baby care unit, a neo-natal intensive care unit (ICU) and an ICU for mothers and a dialysis unit.

Sarma said, “This is a major step in improving healthcare facilities in this easternmost district of the state.”

“Nearly 500 babies are born at the civil hospital here every month. Therefore, the health ministry decided to launch a mother and child care wing for which work started last year,” he added.

The wing has a rest room for patients and attendants besides a baby care unit and paediatrics ICU.

“The dialysis unit, set up under the Prime Minister National Dialysis Programme, is equipped with six machines, to provide free treatment to 18 patients simultaneously,” Sarma said.

Joint director of Tinsukia health services Altaf Ahmed said this dedicated wing will prove to be a turning point as far as delivery of babies and care of mother and child is concerned.

“The government is planning to provide nutritious food to dialysis patients,” he added and clarified that there are only five machines at the dialysis unit to treat 15 patients at a time.

Sarma admitted that the doctor-patient ratio is skewed in Tinsukia. “We are trying to recruit more doctors,” he added.

The minister also spoke about the poor condition of National Highway 37, especially between Tinsukia and Dibrugarh. He said National Highways and Infrastructure Development Corporation Limited was not working satisfactorily. “I met Union minister for road, transport and highways Nitin Gadkari and have drawn his attention to the issue.”

“We will construct the stretch from Dibrugarh to Tinsukia in three months. We shall not wait for funds from the Centre and infuse funds from the state government,” Sarma said.

The minister also announced the construction of two roads in Tinsukia and Dibrugarh, including the 99km Moran-Naharkatia-Duliajan-Digboi stretch, under the Assam Mala project.

Sarma on Sunday visited the Assam Medical College and Hospital (AMCH) in Dibrugarh to review the ongoing work. The minister held a review meeting with AMCH principal Hiranya Kumar Goswami and AMCH superintendent Indra Chutia and heads of various departments.

Sarma instructed the officials to speed up the work.

“Issues like infrastructure development and providing free medicines to patients were discussed in the meeting. The minister instructed the hospital management to upgrade the MRI machine and distribute free medicines to BPL patients,” an official said.

AMCH is one of the premier medical institutions of the Northeast.