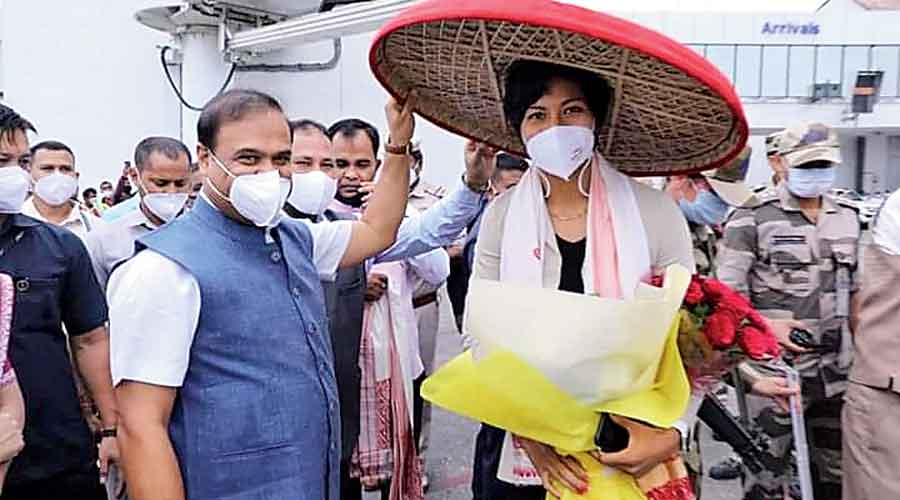 The Assam government on Thursday decided to name a road and a sports complex after boxer Lovlina Borgohain, the state’s first Olympic medallist.

The road to be named after her will be in Guwahati and the sports complex will be set up in Sarpathar Assembly constituency in Upper Assam’s Golaghat district. Lovlina hails from Baramukhia village under Sarupathar constituency.

Lovlina, who had won a bronze medal in the recently-concluded Tokyo Games in the 69kg welter-weight category, was earlier in the morning given a rousing reception at the Borjhar airport by the chief minister, two of his cabinet colleagues and a host of student leaders.

Sarma also announced a cash award of Rs 1 crore for her bronze medal feat, the post of DSP in the Assam Police, Rs 1 lakh a month to help her prepare for the 2024 Paris Olympics and  Rs 10 lakh each to five coaches who honed her skills since her formative years.

Sarma said Lovlina’s success at the Tokyo Olympics would remain etched as a milestone in the sporting history of Assam and India.

“A sports complex worth Rs 25 crore will be built at her native Sarupathar to help local youth excel in sports. A road in Guwahati will also be named after our star player Lovlina,” he said while hailing the efforts of her parents — Tiken and Mamoni Borgohain — in backing Lovlina to chase her dreams despite heavy odds.

Lovlina, who spoke before Sarma, was overwhelmed by the love and blessings showered by the people of Assam, regretting having missed the gold but promised to win it in Paris. Sarma, however, made it clear that Lovlina has already given enough to Assam.

“We are happy and proud of what she has achieved. She has given us enough, becoming the first to win a medal after a 125-year wait by the people of the state. ”

Remembering all the Olympians and other champion sportspersons, Sarma said Lovlina’s parents and Sarupathar MLA Biswajit Phukan will decide where the Rs 25-crore sports complex, which will also have a boxing academy, will be set up in Lovlina's name. It will inspire more Lovlinas to overcome hurdles and achieve their dreams, Sarma said.

The state government had organised both her reception and the felicitation functionss.

Posters, banners, hoardings went up across Guwahati to welcome her while the Assam State Transport Corporation kept  ready a new bus with her photograph quote (You are the Pride of India) prominently displayed on it to take her to her native Baramukhia village in Sarupathar constituency in Upper Assam’s Golaghat District.

The Opposition Congress too handed over a cheque of Rs three lakh to Lovlina who will return to Delhi on Friday to be part of the Independence Day celebrations.

Subodh Malla Barua, Guwahati-based senior sports journalist, said the reception and honour accorded to Lovlina was unprecedented and would go a long way in not only motivating Lovlina but also the future generation of sportspersons. Baruah had covered the Tokyo Games and had a ringside view of Lovlina’s bronze feat.