Assam: Death of a 12-year-old and CM's shockingly cavalier statement

For Himanta Sarma, the revolting sight of a photographer stomping on a motionless Moinul Hoque, the other victim of the police firing, 'is just 30 seconds of the incident' 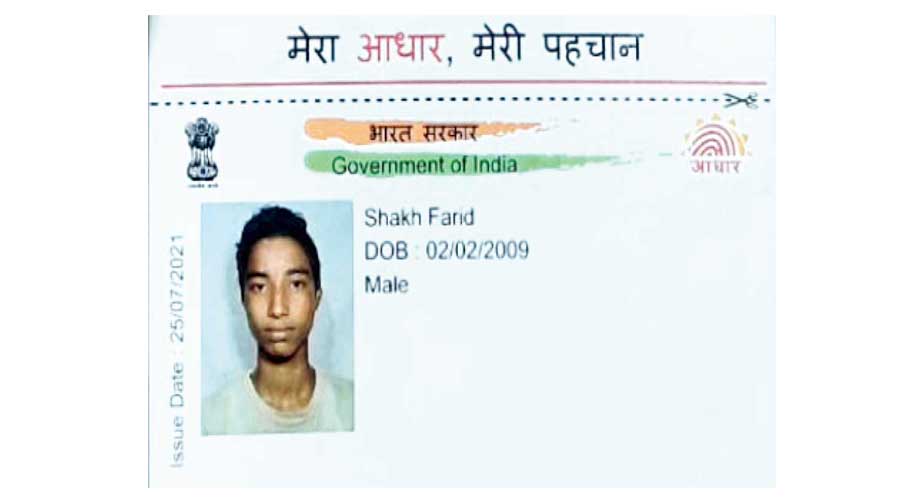 The shock came in two waves.

First, one of the official victims of the police firing in Assam’s Darrang on Thursday was a child who was aged 12 years and seven months and who had collected his Aadhaar card on the day he was shot dead.

The Aadhaar card, ending with the digits 2232, lost its reason for existence within hours of reaching the hands of Shakh Farid, born on February 2, 2009.

Second, for Assam chief minister and BJP leader Himanta Biswa Sarma, the revolting sight of a photographer stomping on a motionless Moinul Hoque, the other victim of the police firing, “is just 30 seconds of the incident”. Later, he said a “3-minute” video.

Moinul Hoque, born in 1993 and a father of three, was kicked, punched and kneed by a professional photographer hired by the Darrang district administration to document the eviction at the minority-dominated settlement on the banks of the Brahmaputra on Thursday.

The photographer, identified as Bijay Shankar Baniya, has been arrested by the CID.

The residents of Dhalapur II say they were not against the eviction but were only demanding rehabilitation instead of being pushed closer to the river.

Chief minister Sarma said the government had agreed to allot six bighas to the landless in the affected area in line with its land policy but not to those who had come from outside the area.

“The organisations — the AAMSU and the Congress — with which we had discussed (the matter) had agreed. The eviction started after that. But 10,000 people should not have attacked the police with lathis and sharp weapons,” Sarma said.

Sarma said: “The photographer attacking a man is condemnable but that is just 30 seconds of the incident. You have to see what happened in the last four months and also see the entire video.”

Farid’s relatives said the boy had fetched his Aadhaar card, meant to serve as proof of identity and address and a tool for financial inclusion, only on Thursday although it had been issued in July.

When this correspondent visited Farid’s grief-stricken family on Friday, his elder brother Amir Hussain produced the Aadhaar card to give the boy’s personal details.

Farid collected the card from the local post office on Thursday so he could avail himself of a scholarship from the minority department. Farid was in Class VII, making him the “most” educated among seven siblings.

“What is the use of this card now? The card has lost its relevance, and Farid his life. We were hoping he would one day get a government job,” said Amir, seated beside his ailing father Khalek Ali. Farid’s mother Golabhanu has been inconsolable since the news of the death arrived around 2pm on Thursday.

The family hails from Kirakara village, which adjoins Dhalpur where the protest against the eviction to free government land had erupted.

“I had seen Farid on his way home with the Aadhaar card. He got caught between the protesters and the police. He was not even 13. Amir had given up his studies to ensure Farid could study and have a good life,” said Sofikul Islam, who lives nearby.

Farid was informed about the card on Wednesday, Sofikul said. “He had to submit the card to his school for a scholarship,” he added.

For most people in Kirakara and Dhalpur, life is hard and farming the only viable option to eke out a living -- a reason that Dhalpur residents resisted the eviction on Thursday.

Darrang district police on Friday said two people were dead and nine policemen injured in Thursday’s clashes. A resident told The Telegraph that Saddam Hussain, identified as one of the dead on Thursday night, was injured but alive.

No untoward incident was reported from the affected area on Friday.

The government was clearing the area of encroachers to set up a community farming project over a 77,000-bigha tract. “I wanted the eviction but I also said that land would be given to the landless…. That’s why I have ordered a judicial inquiry so that the truth comes out,” chief minister Sarma said.

No shrine but prayer for peace