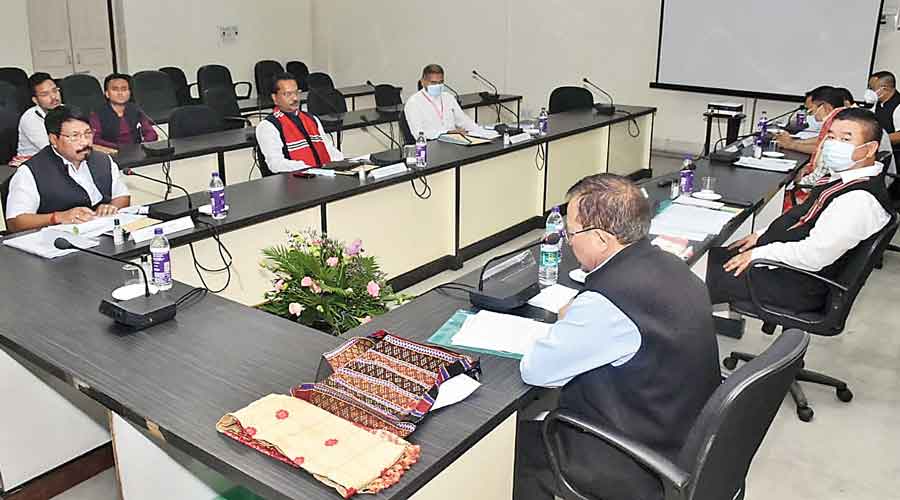 The Assam and Mizoram governments on Thursday decided not to send their forest and police forces to any area along the inter-state border, which has witnessed “confrontation and conflict” recently, to ensure peace, according to a joint statement issued after a ministerial-level meeting in Aizawl.

Within hours of the meeting, Assam withdrew a travel advisory issued last week asking people not to travel to Mizoram because of safety concerns. The advisory, the first-of-its-kind issued by one state against another, had further strained ties after the border flare-up on July 26 that claimed the lives of six Assam policemen, fuelling tension on both sides, filing of FIRs against each other and disrupting the flow of goods to Mizoram from Assam.

A joint statement issued after the meeting said both states welcome and agree to take forward the initiatives by the Union ministry of home affairs and both chief ministers to “remove” tension prevailing along the inter-state border and find lasting solutions to the disputes through talks.

While welcoming the deployment of a neutral force by the Centre, the statement said both the states shall not send their respective forest and police forces for “patrolling, domination, enforcement or for fresh deployment to any of the areas where confrontation and conflict” has taken place between the police forces of the two states in recent times.

This would include all such areas along the Assam-Mizoram border in Karimganj, Hailakandi and Cachar districts in Assam and Mamit and Kolasib districts in Mizoram.

The Mizoram government representatives also conveyed their condolences in the statement for the loss of lives on July 26 and best wishes for the speedy recovery of those injured, a gesture which most feel will go a long way in calming tempers in Assam.

Over 45 policemen were injured in the clashes between the police forces of both states. Mizoram has accused Assam police for entering their territory and firing first.

“Representatives of governments of Assam and Mizoram agree to take all necessary measures to promote, preserve and maintain peace and harmony amongst the people living in Assam and Mizoram, particularly in the border areas,” the statement said.

Most observers said that both sides will have to go the extra mile on the ground to normalise ties like Assam ensuring the smooth flow of traffic and goods to Mizoram and the latter ensuring the safety of the truckers.

There has been no movement of traffic and goods trucks to Mizoram till 6.30pm on Thursday through the National Highway 306 that connects the affected Vairengte (Mizoram) with Lailapur (Assam). The unofficial blockade in Assam’s Barak Valley, many feel, is a huge hurdle in normalising ties.

Moreover, the Kolasib district administration wrote to its Cachar counterpart soon after the meeting that a new camp site was “constructed” by the Assam police on Thursday at Bankang within Saipum Village Council area in Mizoram near Hadama, Assam. The site is around 10km from the Vairengte-Lailapur border.

“In this regard, I am urging you to kindly honour the agreement of the senior ministers of both the governments and withdraw your troops from the newly constructed camp site at the earliest,” the Kolasib deputy commissioner said in a letter to his Cachar counterpart.