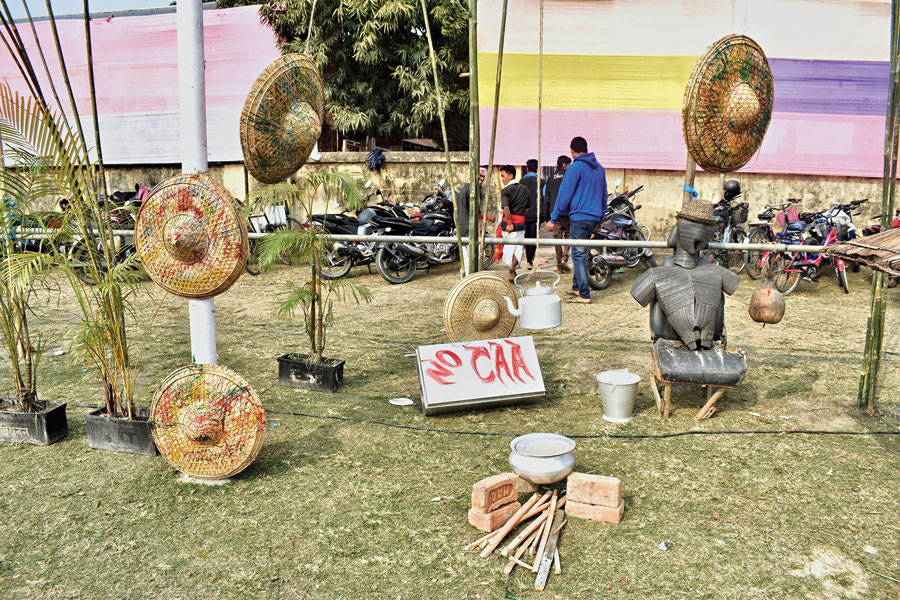 The Kalaguru Sangeet Mahotsav at Tangla in Assam’s Udalguri district, which began on Friday, has not been left untouched by the anti-Citizenship Amendment Act sentiment.

A “No CAA” banner is vividly displayed at the venue, Tangla High School playground, with a hanging teapot and a dummy “tea man” placed beside it. The protest site has turned into a photography zone where the visitors are clicking selfies.

Diganta Rabha, a member of the local organising committee, said: “We came up with the symbolic protest against the contentious Act which is detrimental to Assam and Assamese people. Though it is a music festival to pay homage to doyen of Assamese music and art, Kalaguru Bishnu Prasad Rabha, the people of BTAD have also protested against the Act and lent moral support to the protests across the state when CAA is not applicable to the four districts —Kokrajhar, Chirang, Baksa and Udalguri.”

The festival is hosted by Zubeen Garg, a prominent anti-CAA face, under the banner of Kalaguru Foundation and Zubeen Garg Fan Club.

He has also united many artistes under the Assamese Shilpi Samaj to stage non-violent protests in the form of drama, art and music.

Zubeen has also vowed to not shave until the CAA is scrapped. “My beard is turning grey because I am growing old and have been engaged in this movement against the Act. But I have decided that I will only shave when the government scraps the Act,” he had said.

Protests have taken place in different parts of the country, including in New Delhi, over CAA which grants citizenship to non-Muslims from Pakistan, Afghanistan, and Bangladesh, who entered before December 31, 2014.

At Beesakopie village in Upper Assam’s Tinsukia district, a yagna was organised on Friday to invoke “divine intervention” so that CAA is repealed by the government.

All Brahmins’ Association of Assam chief convener Acharya Akhileshwar Shastri said: “Yagna has spiritual powers. So the priests recited the Gayatri mantra with pure devotion and offered prayers to goddess Savita so that our political leaders understand the ill effects of the Act and repeal it to save Assam and the rest of the Northeast.”

Hundreds of people, including women and children, participated.

“Prime Minister Narendra Modi had promised before the Lok Sabha polls that Bangladeshi immigrants will have to go back with their bag and baggage. Ultimately, through CAA, the government led by him will provide citizenship to them. We feel angry when we remember his promise,” said Priyanka Barua Goswami, a devotee.

On the other hand, the Mayamara Kala Kristi Samanvaya Samaj, xatradhikars and bhakats from several Tinsukia villages also protested against the Act by performing religious rituals across the district in which members of student unions, women’s groups and locals participated.

All Assam Students Union’s Tinsukia unit president Binay Dubey said: “It is our pride that since the Citizenship (Amendment) Bill was passed by the Union cabinet, our spiritual gurus, xatradhikars, scholars, teachers, professors, writers, singers and intellectuals, along with the people, are protesting against CAA. They are reading holy books, offering prayers, worshipping and performing bhajans so that their representatives in the governments in Delhi or Dispur understand that CAA is not good for the state or the Northeast.”

Anti-CAA protests have been going on in the state since the Lok Sabha passed the bill on December 9 last year.