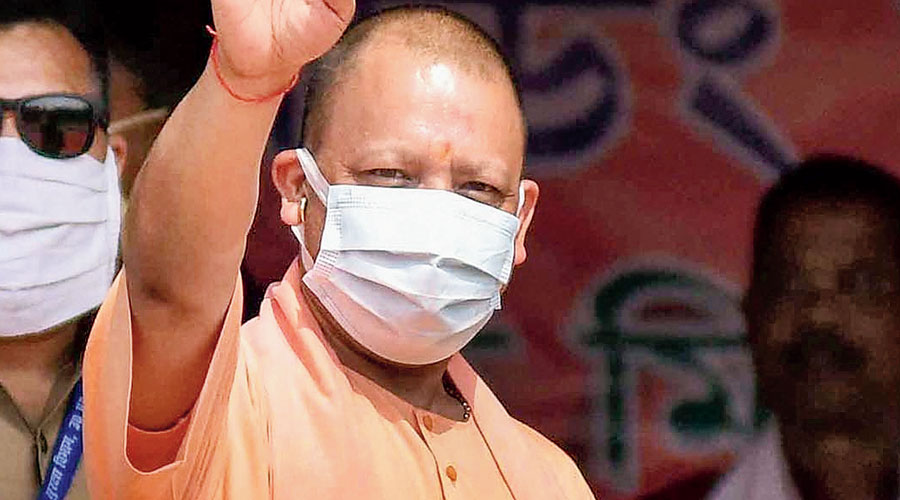 Uttar Pradesh chief minister Yogi Adityanath on Wednesday credited Srimanta Sankardev, the Vaishnavite saint, scholar and reformer, with warning Assam against infiltration as long back as the 15th century, seeking to hijack him for power politics.

“This is the land of Sankardev.… I admire and respect the mahapurush for his role in saving this land.… I bow to this land of Sankardev. Srimanta Sankardev had warned us against the problem of infiltration. That is why the Congress could not tolerate him ever because the Congress’s policy was never development or peace.… Its policy was give-and-take to grab power and for which Assam had to pay a price for long in tackling atankwad (terrorism) and algawbad (separatism),” the first-time chief minister said at a poll rally at Hojai in central Assam.

Adityanath, the BJP’s Hindutva poster boy, in his apparent exuberance to blame the Opposition Congress for allowing ghuspetiyas (infiltrators) who are “a threat to national security”, not only got his “history” wrong but repeated the claim at his next rally at Kalaigaon in Baksa district. At the Baksa event he also said the Congress had tied up with the AIUDF that had always “encouraged” infiltrators.

The Congress was swift to pounce on Adityanath’s faux pas, “amazed” at his linking the revered saint with the problem of influx confronting Assam, an issue that attracted attention after the Partition in 1947 and the creation of Bangladesh in 1971.

Influx has remained an emotive issue in Assam, triggering a six-year-long movement in 1979 that resulted in the signing of the Assam Accord in 1985 that fixed March 24, 1971, as the cut-off date for detection and deportation of illegal foreigners.

The ruling BJP has made infiltration a key plank for the Assembly polls in Assam starting on March 27, with senior party leaders  invoking the issue to attack the Congress’s alliance with the AIUDF, a party the BJP sees as the protector of infiltrators. The BJP has been projecting the alleged infiltrators as a threat to the culture and identity of Assam.

The Congress tore into Adityanath’s claim, questioning the BJP’s knowledge of Assam’s history and culture.

“This proves how much they know about the culture they claim they are going to protect. He (Adityanath) is trying to make the saint a part of the BJP’s divisive politics. While Yogiji talks about a much revered 15th century saint, Sri Srimanta Sankardev, fighting against infiltrators, he should know exactly what Srimanta Sankardev fought against.

“Srimanta Sankardev was against the exploitation of people by those who followed the ideologies and dogmas laid down by Manusmriti and also idol worship. He believed in the assimilation of society and was against caste system.

“So Yogi needs lessons in history as does the Prime Minister who had said Lachit Barphukan was a freedom fighter. Lachit Barphukan was actually an Ahom general who had fought the famous battle of Saraighat in 1671,” Assam Congress media department chairperson Bobbeeta Sharma told The Telegraph.

Modi had paid tribute to Barphukan during his speech at the nationwide launch of the Azadi ka Amrit Mahotsav on March 12. The event commemorates 75 years of Independence from the British. Barphukan passed away in 1672.