Mine got flooded on December 13 last year, trapping 15 miners 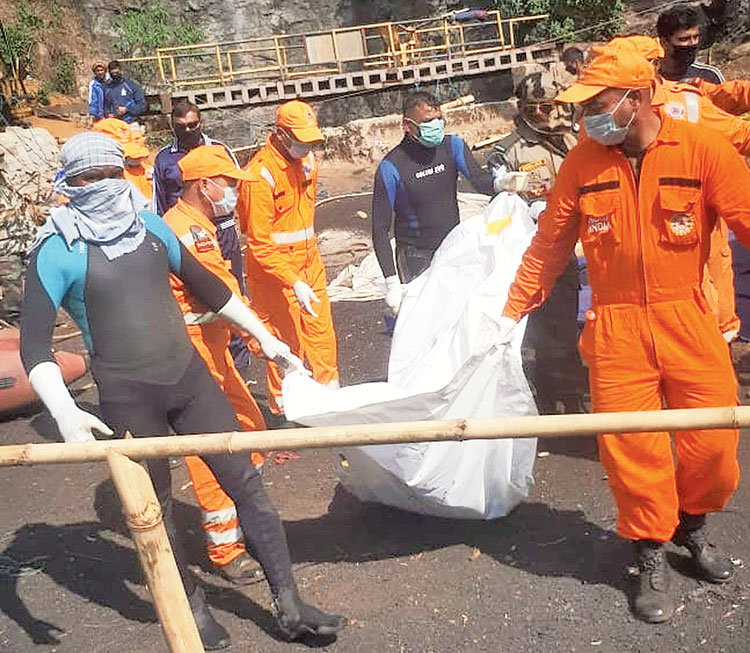 The Indian Navy, in a joint operation with the National Disaster Response Force (NDRF), retrieved the body of an unidentified miner from the coal mine at Ksan in East Jaiñtia Hills on Wednesday afternoon.

This is the second retrieval after the body of Amir Hussain from Assam’s Chirang district was recovered on January 23.

The second body was recovered 77 days after the incident occurred on December 13 last year when 15 miners got trapped in the coal mine after water gushed into the pit after they reportedly broke through the wall of another mine.

“Five persons — four NDRF rescuers and one Navy personnel, went down the main shaft number 26. The body was pulled out from the shaft around 1.20pm and handed over to the officer-in-charge of Saipung police station,” an official said.

Besides all safety measures, inflatable boat, body bag and other equipment of the NDRF were used during the operation.

Around 1.50pm, the body was shifted to the civil hospital at Khliehriat for post-mortem and further action.

Rescue operations are still continuing to recover three more bodies detected by the remotely operated vehicle used by the navy.

Spokesperson for the rescue operation R. Susngi said the body retrieved was the fifth body of a miner detected by the vehicle on Tuesday evening.

Pumping of water from the flooded coal mine by Coal India Limited, Kirloskar and KSB is also continuing.

Of the two pumps provided by Kirloskar, only one is in use because the other developed technical problems.

The operations are being monitored by the Supreme Court following a petition filed by advocate Aditya N. Prasad.

The court on Monday directed that high-powered pumps of Kirloskar company be airlifted and installed immediately for dewatering the coal mine.