Webinar organised on the 121st death anniversary of Birsa Munda 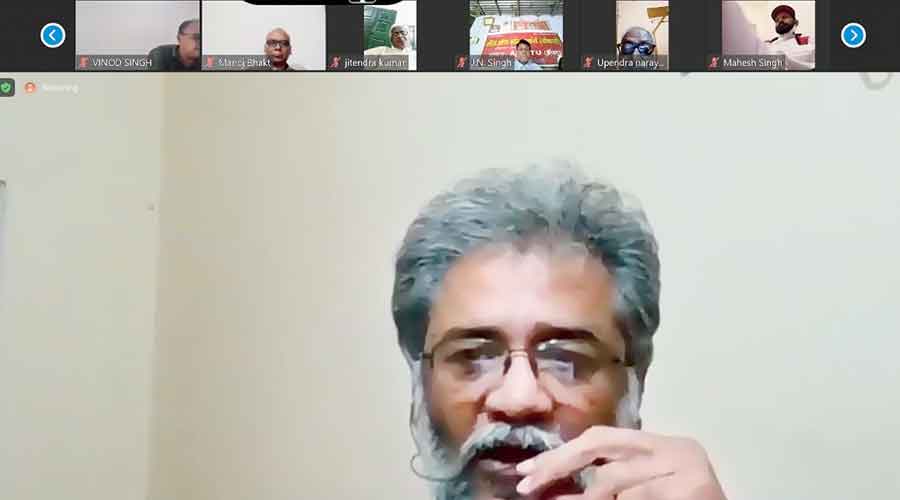 If the Prime Minister can express his Mann Ki Baat, you can also do Apno ko Yaad every Sunday.

Election could be conducted at remote booths in the thick of a pandemic, so vaccination camps can also be organised at far-flung areas for protecting the people.

Only a free and universal, not insurance-based, healthcare system can help the poor survive.  So, it must be strengthened.

Such opinions were expressed by the speakers at a webinar organised on Wednesday, the 121st death anniversary of Birsa Munda, the tribal icon who had died this day in 1900, that had ‘Mahamari aur Tanasahi se jujhta Bharat’ (India battling against pandemic and authoritarianism) as its topic.

“We all have recently lost a lot of our near and dear ones due to Covid that spread because the government did not take timely action and their memories will be with us forever,” said Dipankar Bhattacharya, the general secretary of the CPI-ML, that organised the webinar. He added that if the Prime Minister can express his Mann Ki Baat, everybody could do their Apno Ko Yaad (Remembering own ones) every Sunday.

At the end of the webinar, over 150 persons who attended it resolved to do Apno koYaad and post its contents on social media every Sunday this month.

“If the government could hold the election at booths in remote areas in the thick of a pandemic, it can also organise vaccination camps at such places,” Bhattacharya further opined, demanding registration for vaccination should also be made physically at those camps as rural people are not comfortable with digital recordings.

“Still, it was due to the care they received at the government-run facilities like Rajendra Institute of Medical Sciences (RIMS) in Ranchi that many poor who had to be hospitalised following Covid-19 infection survived,” Ramesh Sharan, development economist and former vice-chancellor of Vinoba Bhabe University (Hazaribagh), said while speaking at the webinar.

They could never afford to go to private hospitals and would die if these government-run hospitals were not there, the professor pointed out, adding such facilities were needed to be improved.

The infrastructure at those facilities should be strengthened, manpower increased and new recruits properly trained so that they can treat the community in a better way, he suggested.

“A free and universal healthcare system and not an insurance-based one is what the country actually needs,” Sharan said, adding that would involve much less cost compared to private hospitals even if a patient has to make nominal payments for certain services.

But these facilities are mostly run by the state governments that are now starved of funds, the economist further pointed out, demanding “the Union government must pay the states their dues on account of GST compensations so that they get some funds to spend on public welfare schemes”.

“The pandemic caused huge job loss and the markets are dry as people have no money to spend,” Sharan pointed out, adding the Union government must encourage spending to revive the economy by injecting money into markets, “even by printing notes, if need be”.

The webinar was also addressed by about a dozen others, including politicians, activists and social workers.