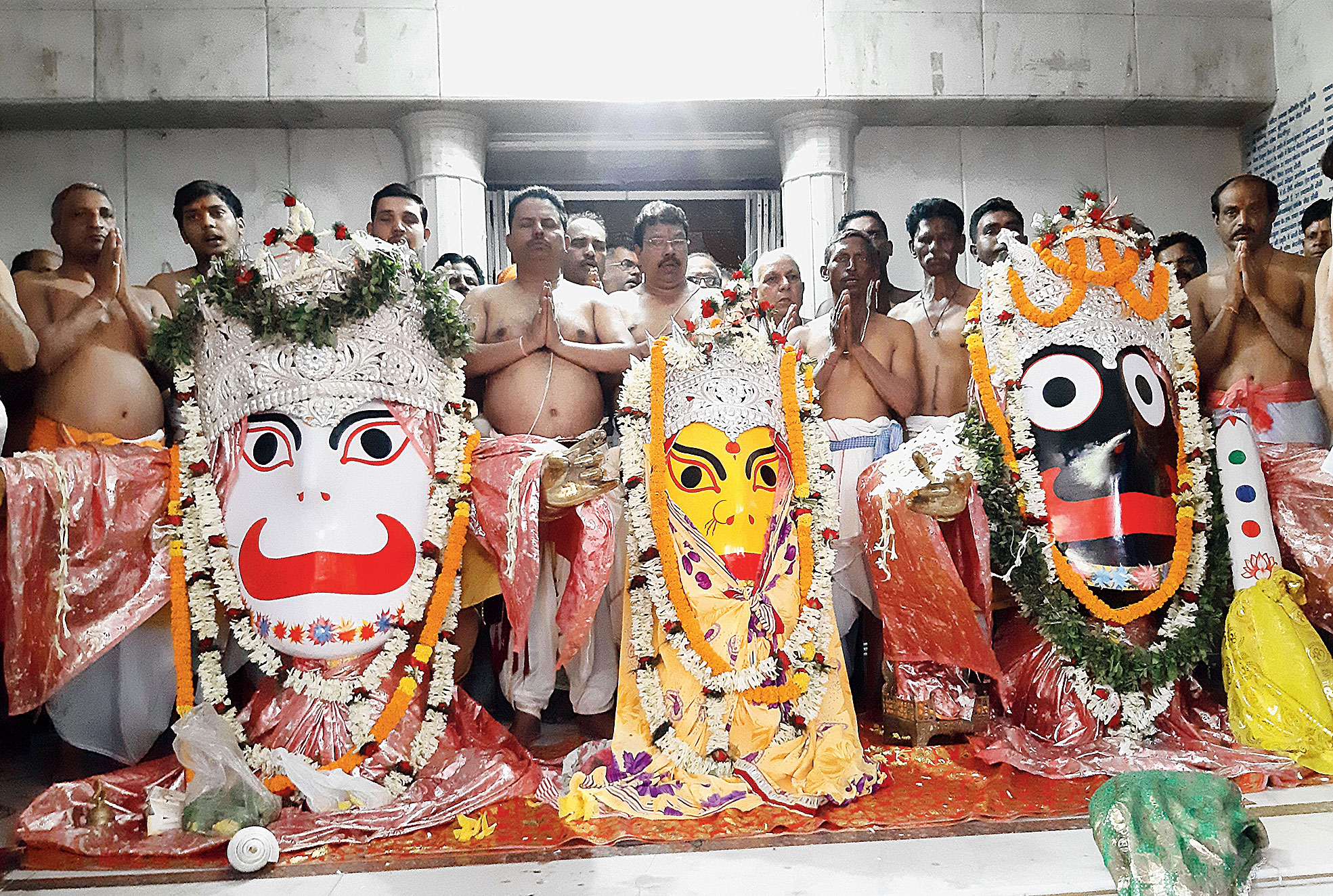 Ready for chariot ride: Priests perform the netra daan ritual at Jagannathpur temple in Ranchi on Wednesday ahead of the Rath Yatra festival that begins on Thursday.
Picture by Prashant Mitra
Raj Kumar   |   Ranchi   |   Published 03.07.19, 06:40 PM

The state government has decided to live-stream Rath Yatra on its official Web portal (Jhargov.TV), app, YouTube channel and Facebook page on Thursday.

The live-streaming will start from 9 am and continue till the chariot of Lord Jagannath reaches Mausi Bari from the historic Jagannathpur temple.

An official of Jharkhand Agency for Promotion of Information Technology (JAP-IT) said this was the first time that such an arrangement was being made.

“People with Android phones can download the app from Google Playstore. Others can watch it on desktops or laptops,” the official said.

The information and public relations department will roll out as many as 47 vans fitted with LED TVs to broadcast the event in villages.

Chief executive officer of JAP-IT Sarvesh Singhal said the live-streaming facility was introduced in the state two years ago, but it was being used during Rath Yatra for the first time. “We have used the live-streaming facility for viewing press conferences, important government events and announcements. Tomorrow (Thursday), we will use it to show Rath Yatra for the first time,” Sarvesh said.

Director of Jhargov.TV Arun Prakash said he visited the mela venue with his technical team on Wednesday to identify the spots to install the cameras. “Working amid a crowd is always a challenging task. A 10-member team armed with necessary equipment is at work.”

“It is a good facility. It will be beneficial for people like us who cannot walk in a crowded place, but want to see the chariot of Lord Jagannath nonetheless,” said Harmu resident Kapileshwar Prasad Sinha, a retired employee at the accountant general’s office.

Rahul Kumar (19), a resident of Dhurwa, was not happy.

“One cannot feel the ambience of the Rath Yatra sitting at home. The use of such technology during religious events will keep people away from the ground and create a disconnect,” Kumar said.