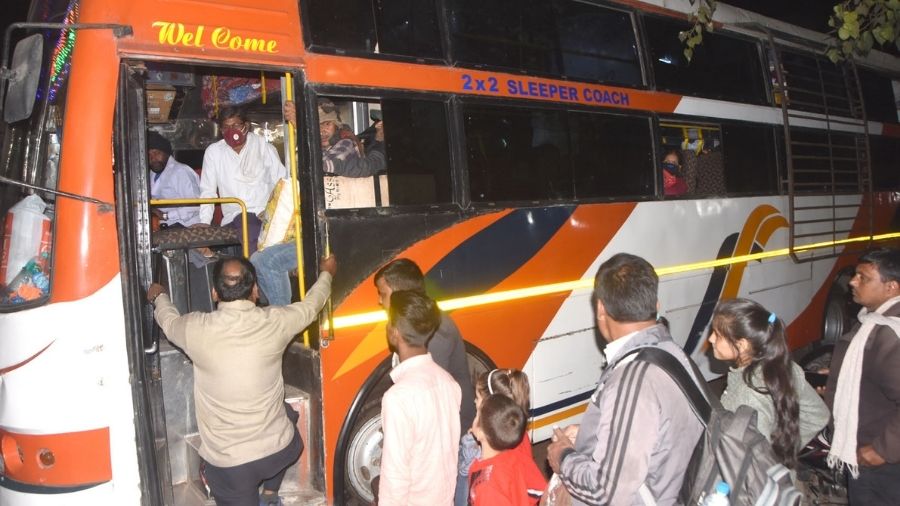 Limited numbers of special trains during Chhath have compelled passengers to line up at Dhanbad interstate bus depot to reach their homes during the festival.

Commuters have opted for advanced booking in several bus routes including Patna, Nawada, Bihar Sharif and Aurangabad, while many others were seen beelining at the counters to book tickets for reaching their destinations.

However, several others have been compelled to travel in hired or private vehicles.

Talking to The Telegraph Online on Wednesday, Bundela Travels operator Sumit Singh said, “We had maximum rush on November 16 and 17 but but it is continuing till today. But there are fewer passengers from tomorrow onwards.” Bundela Travels operates more than two dozen buses in the Patna, Aurangabad and Bihar Sharif routes from Dhanbad.

“Such was the situation that we had to divert the buses meant for other places like Bokaro, Hazaribagh and Ranchi to the Patna, Aurangabad and Bihar Sharif route”, he said, adding that they were operating four buses on the Patna route two or three days earlier but had to increase it to six per day to cater to the huge rush.

“We have also increased the number of buses on the Aurangabad route from four to eight, and from six to eight on the Bihar Sharif route,” Sumit said.

A bus operator at Dhanbad, who wished to remain anonymous, said that the fares were hiked at about 20 to 25 percent than normal. The fare for AC buses to Patna stands at Rs 500 per person while that for Non-AC ones are priced at Rs 400. The fares for Aurangabad and Bihar Sharif routes are kept at Rs 350 and Rs 320 in non-AC buses.

“We are trying to accommodate almost all passengers and the decision to increase the buses on Bihar route has been carried out accordingly,” another bus operator named Sunil Singh said.

Talking to The Telegraph Online on Wednesday, Ravi Prakash, a resident of Digwadih in Dhanbad, said, “The journey was comfortable and being a regular visitor of my native place at Patna I experienced the most comfortable journey this Chhath as only the limited ticket bearing passengers as per seat availability have been allowed to enter the station.” Prakash was traveling in the third AC coach of the Ganga-Damodar Express to reach his hometown at Patna.