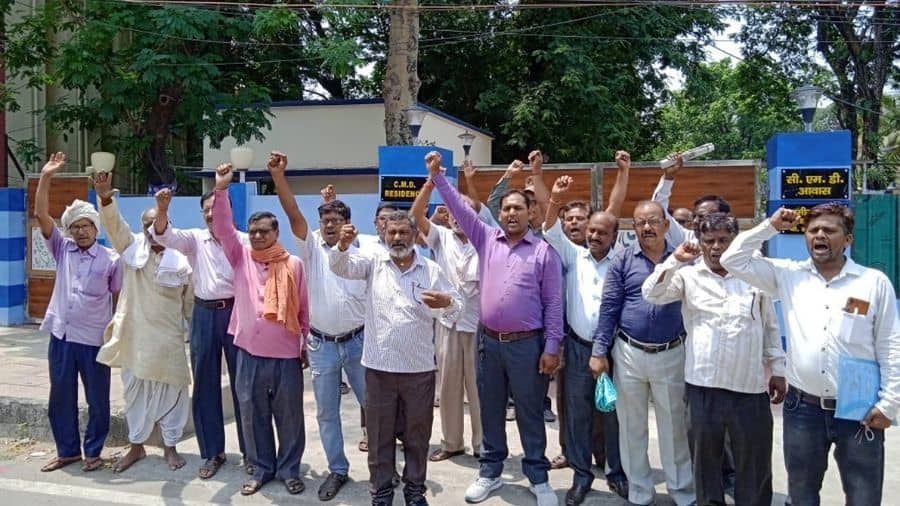 More than 100 teachers out of a total 275 of 75 BCCL aided schools lying in different colliery areas of Dhanbad today launched an indefinite hunger strike outside the residence of BCCL Chairman-cum-Managing Director Samiran Dutta.

The protest was carried out under the banner of Koyla Khadan Shikshak Sangh demanding immediate payment of pending salaries for the last 25 months, besides other facilities.

Talking to the media, General Secretary of Koyla Khadan Shikshak Sangh CD Singh said, “We launched the phase-wise agitation against the injustices inflicted against us by BCCL administration since May 2 but our demands have fallen on deaf ears compelling us to launch indefinite fast outside the office of BCCL CMD from today.”

“If our demands remain unheard, we will be compelled to burn the effigy of director (Personnel) and General Manager (Welfare) of BCCL on May 23 for which BCCL administration will be solely responsible,” said Singh and added that they get paid Rs 5000 per month making them the lowest-paid teachers in the country. Still, the BCCL administration is not willing to pay even that small amount due to their insensitive approach.

Another protesting teacher while echoing sentiments with Singh said, “The BCCL administration instead of making pending salary payment of 25 months recently issued a fresh list of teachers as per which the services of teachers of 29 of these school out of 75 have been terminated.”

“We outrightly reject the new list of sanctioned teachers of BCCL aided schools released by BCCL as per which they services of several of teachers have been terminated of them being overage but the fact remains that there is no circular of Coal India Limited fixing the upper age limited of its aided schools,” said the agitator.