Stan Swamy: Human rights activists stage agitations in Jharkhand, Delhi and other parts of the country 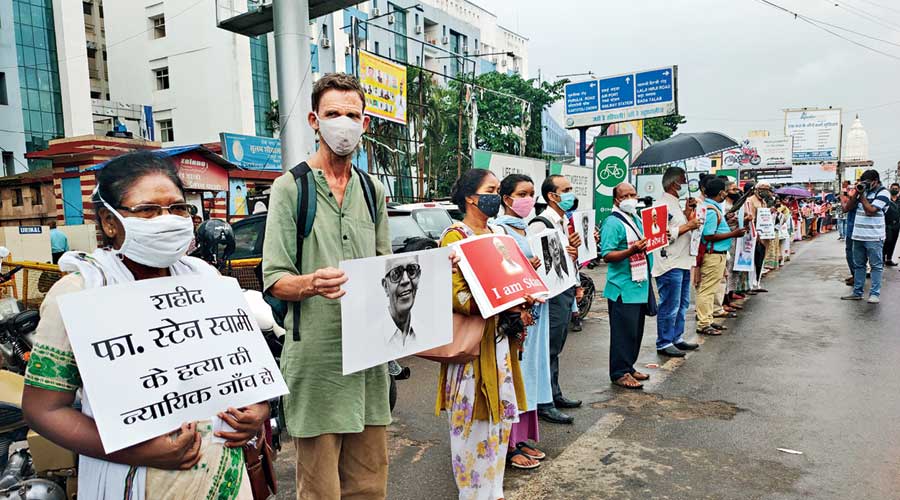 Human rights activists, civil society groups, mass organisations and trade union members staged agitations in Jharkhand, Delhi and other parts of the country on Friday in protest against the “institutional murder” of Father Stan Swamy.

More than 70 people, including academics such as the development economist Jean Dreze, students and representatives of trade unions and the People’s Union for Civil Liberties, braved the rain to form a 1km human chain on the Main Road near the Albert Ekka Chowk in Ranchi.

The protests are part of a series of public observances called by rights groups, trade unions, Christian organisations, Left parties and their student and youth wings over the next five weeks to protest against the government’s treatment of Father Stan and push for a more humane policing and justice system.

The 84-year-old, ailing Jesuit  and tribal rights activist from Ranchi had died in custody in Mumbai while waiting for bail nine months after the National Investigation Agency (NIA) arrested him in the Elgaar Parishad-Maoist links case.

“A delegation will be submitting a memorandum addressed to President Ram Nath Kovind through Jharkhand governor Ramesh Bais with a charter of demands.”

The demands include the repeal of “draconian” legislation such as the anti-terror law UAPA, the sedition law and the National Security Act; the release of all political prisoners; fixing accountability on law-enforcement and investigative agencies for filing false cases; and compensation for victims of false cases and police atrocities.

Another demand is the immediate withdrawal by the Jharkhand government of all the cases lodged against Father Stan and others in connection with the Pathalgadi tribal rights movement.

“There were agitations in Karnataka, Tamil Nadu, Rajasthan, Maharashtra, Delhi and other states on Friday demanding justice for Father Stan and calling on the judiciary to restore dignity to Father Stan and give him justice at least in death,” PUCL national general secretary Kavita Srivastava told The Telegraph from Jaipur.

She said the month-long campaign would witness an agitation on August 9 to mark World Indigenous Day and the launch of the Quit India Movement of 1942. On August 15, a pledge would be taken to defend democracy and the Constitution with a countrywide reading of the Preamble.

“There are also plans for a countrywide mass hunger strike between August 15 and 27,” Srivastava said.

“There will be a nationwide protest on August 28, too, as it is the day when five people in the Bhima Koregaon (Elgaar Parishad) case were arrested three years ago. There are plans to end the campaign with a candlelight vigil for all jailed comrades (political prisoners).”

The Jesuit Conference of India has called on its followers and friends to mark July 28 as National Justice Day in memory of Father Stan, and invited people irrespective of religious identity to join in paying homage to the priest.

Civil society groups will hold a candlelight march across Jharkhand on August 15 to protest the Centre’s crackdown on dissent.

Several Left groups held protests in Delhi on Friday on the sidelines of the Kisan Sansad at Jantar Mantar.

Prasenjeet Kumar, working general secretary of the CPIML Liberation’s All India Students Association, said: “The new revelations about the Pegasus spyware have brought into common knowledge the kind of surveillance and repression Indian people are being subjected to. Governments are colluding in order to oppress people.”

He added: “The death of Father Stan Swamy is another example of how inhuman the RSS-BJP regime is. We demand an independent inquiry and immediate release of all political prisoners.”

The other participants in Delhi included CPM student arm SFI, the CPIML’s Liberation and Red Star factions and their fronts, several Far-Left student groups, and the National Confederation of Human Rights Organisations.

“Mass movements are built by the masses. No matter how many leaders are taken political prisoner by the central government, many more will come from the masses and take their place,” SFI Delhi state committee member Varkey Parakkal told the gathering.

The New Trade Union Initiative (NTUI) too held meetings and protests across the country on Friday.

“All trade unions, irrespective of political affiliations, and all organisations of farmers, women, students, and communities that are discriminated against besides democratic rights organisations joined our daylong protests across the country in memory of the fearless Father Stan,” NTUI general secretary Gautam Mody said.

“The objective was to defend our democracy, workers’ right to strike, our right to dissent and, above all, the idea of a plural and progressive India.”

In Bombay High Court, a judge who praised Father Stan’s work withdrew his oral observations in response to a law officer’s request.

PTI quoted additional solicitor-general Anil Singh, who appeared for the NIA at the hearing of a plea challenging the denial of bail to the Jesuit, told Justice S.S. Shinde: “We have all condoled the death of Mr Swamy, but any personal comments or private comments coming from the judges or any law officer, especially in the open court, are normally being twisted by the press and social media.”

Justice Shinde, who heard the case along with Justice N.J. Jamadar, said: “If you want, I take my words back. Our endeavour is to stay fair and balanced always. That should be the end of the matter.”

Father Stan’s counsel Mihir Desai asked the court to monitor the mandatory magisterial probe into the custody death that is yet to begin.

The NIA opposed this on the ground that as the priest was dead, the appeals on his bail stood abated and this is where the hearing should end.

The court asked Desai for a written submission and adjourned the matter till August 4.

The bail plea of lawyer-activist Sudha Bharadwaj, a co-accused of Father Stan, too was adjourned to August 2 by the same bench after the Maharashtra government and the NIA argued she shouldn’t be granted default bail on a technicality.

Bharadwaj’s lawyer had sought bail on the ground that the prosecution had erred by getting an additional sessions judge, and not the designated special judge of an NIA court, to take cognisance of her chargesheet.

Additional reporting by PTI from Mumbai