The feast organised as part of the effort of Baibhav Sinha, town president of Congress was aimed at felicitating the women on the occasion of Mothers' Day 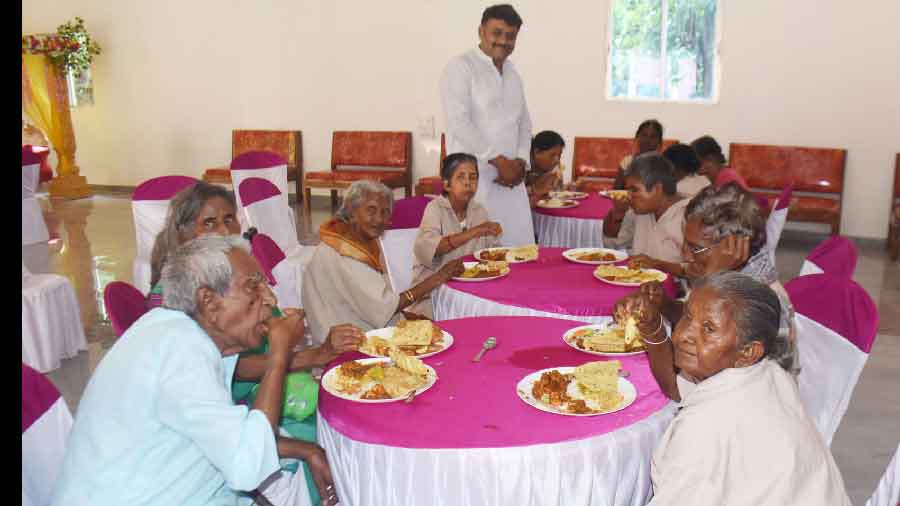 Altogether 18 women inmates of Lalmani Vridhashram, an old age home situated in the remote Tundi block of Dhanbad were felicitated today amidst cake cutting and special feast organized at one of best restaurants of Dhanbad, Amantran at Dhiya locality.

The feast organised as part of the effort of Baibhav Sinha, town president of Congress who is also the owner of the restaurant, was aimed at felicitating the women on the occasion of Mothers' Day.

The function began at the restaurant at  around 11.30 am with the welcoming of all the guests by Sinha and his family members, which was followed by the Cake Cutting Ceremony. The inmates accompanied by the officer bearers of the management Committee of the old age home led by  its president, Naushad Gaddi later enjoyed the delicacies including  Pulao, Dal Fry, Rumali Roti, Paneer Butter Masala, Mix Veg, Butter Chicken, Papad, Salad, Gulab Jamun, Rasgulla, Paneer Pakoda, Cold Drinks cake etc.

The guests were also felicitated by Sinha with the shawls and bouquet during the over 4 ½ hour function which concluded at around 3 pm.

Talking to The Telegraph Online, Sinha said “As people around the world are celebrating Mothers' Day today we decided to celebrate the occasion differently spending a few moments with such mothers who are away from their family  living in old age home due to one or other reason.”

“The celebration should not be limited to writing messages on our social media accounts but doing our bit in the limited possible way to change the lives of those who elderly people have nobody to look after in their family” and added that each of guest of guests were also provided a packet comprising essential things of daily need like soaps, hair oil, shampoo, tooth brush, tooth paste, biscuits etc.

“We also felicitated, Savitri Devi, a resident of Katras on the occasion who saved the life of a child of her neighborhood in 2014 while some of the children of her locality including her son slipped into  a newly dug up village well, although she failed to save her own son” said Sinha.

Vimla Devi, an inmate of old age home said “All of us are overwhelmed at the love and respect offered to us.”