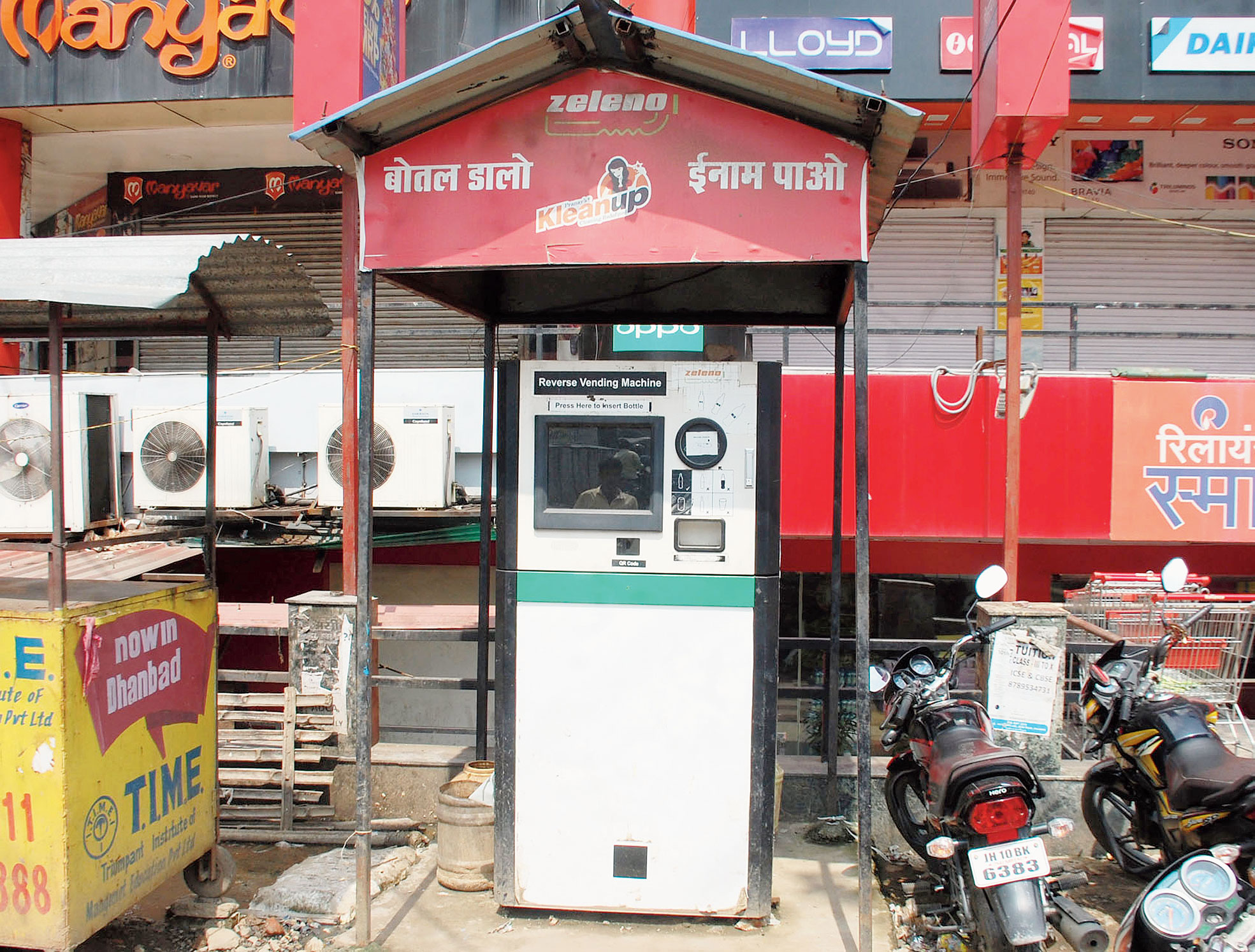 Three recycling machines, installed in the coal town to inculcate environment-friendly habits among residents over a year ago, haven’t been working for over five months now, primarily because of lack of awareness and the Dhanbad Municipal Corporation’s (DMC) inability to push certain promised incentive schemes.

The machines, called smart bins, were installed by Delhi firm RVM Recycle under the brand name Zeleno on plots provided by DMC at Bank More, City Centre and near Rangatand on April 4, 2018.

The Bank More smart bin was inaugurated by mayor Chandrashekhar Agarwal amidst much fanfare.

The idea was to provide an eco-friendly method of waste disposal that would ultimately encourage people to get rid of plastic bottles and soft drink cans in a manner that was environment-friendly.

As per the arrangement, once bottles or cans were put inside a smart bin for recycling, it would generate a paper coin. The resident who used the bin could then use the coin to get discounts at specified garment shops, ice-cream parlours and fast food vendors with whom RVM Recycle was to have had tie-ups.

But use of the smart bins did not pick up due to lack of awareness among residents and reluctance of shop-keepers to enter into an agreement with the Delhi company. Gradually, the smart bins stopped working.

Marketing head of RVM Recyle Utsav Sahni said the company wasn’t responsible for spreading awareness among the people. “How can we invest in spreading awareness when we are not getting money for operating the smart bins,” he said, referring to its understanding with DMC.

Sahni said DMC was to pay the firm Rs 17,000 per machine per month as operational charges. “We have not received payment from DMC for the last 10 months,” he said.

“Lack of awareness among the people who are the ultimate users of any facility is the main reason for the failure of the scheme,” said vice president of Federation of Dhanbad Zila Chamber of Commerce and Industry Surendra Arora, whose runs a gift shop at Bank More, barely 200 metre from one of the smart bins.

President of Federation of Dhanbad Zila Chamber of Commerce and Industry Rajesh Gupta said it was unfair to blame shop-keepers. “Our job is not to operate any facility. We can assist in its operation but the primary responsibility of making people aware about the use of any facility lies with DMC,” he said.

Gupta said several water vending machines of DMC were also lying defunct. “This is what happens if we install machines without making proper ground work,” he said.

“The machines were not installed by Dhanbad Municipal Corporation. Rather, these were installed by

RVM Recyle. We had only provided land for installing the machines. Hence, the failure is not ours,” he maintained, but did not mention payment of operational charges.

“Until and unless common people use the facility and shop-keepers provide concessions in lieu paper coins generated by the machines the facility won’t work properly,” he said.