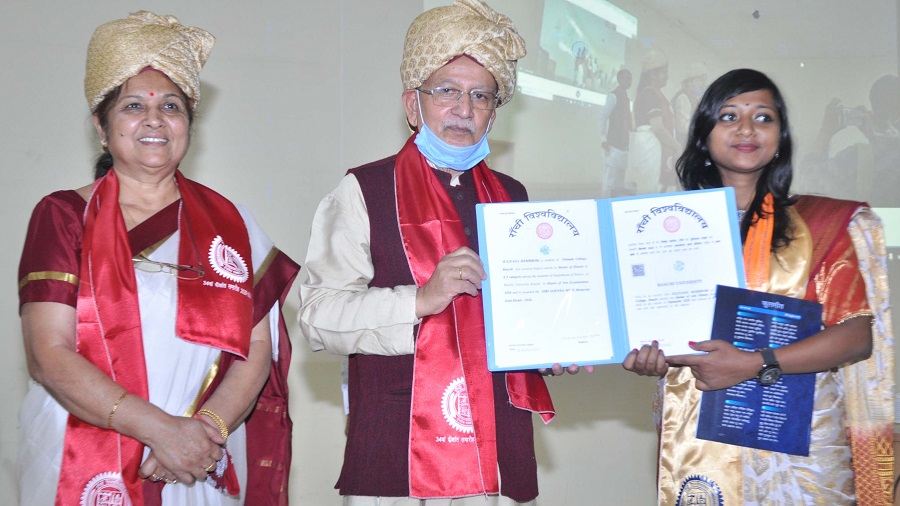 Ranchi University Vice Chancellor Ramesh Pandey and Pro Vice Chancellor Kamini Kumar confer certificates to a few toppers on campus on the occasion of the annual convocation in Ranchi on Monday. The convocation was, however, conducted virtually in all other aspects with Governor Draupadi Murmu addressing students over video hook-up.
Vinay Murmu
Our Correspondent   |   Ranchi   |   Published 01.03.21, 06:46 PM

For the first time since its establishment in 1960, Ranchi University (RU) organised a virtual convocation ceremony for limited guests and gave away certificates in person only to around 63 toppers on Monday amid Covid-19 restrictions.

While RU Vice Chancellor Ramesh Pandey and Pro Vice Chancellor Kamini Kumar conferred certificates and medals to the toppers of undergraduate and postgraduate courses in the auditorium of the Institute of Law Studies in a low-key event on campus, Governor Droupadi Murmu addressed students via video conferencing from Raj Bhavan on the 34th Convocation ceremony.

“It gives me immense pleasure to be present virtually with you all on this day. However, I would have been happier had I got the opportunity to see you all in person on this special day,” said Murmu, adding that the smile on the faces of students on convocation day gave her great joy.

Quoting Mahatma Gandhi, Murmu said that right education lets people’s actions speak louder than words and inculcates the feeling of helping others. “Ranchi University is one of the oldest universities in Jharkhand, and it has achieved a good name across India with its achievements,” said the Governor.

She added that education was the most important pillar of development in India as it lets a person find inspiration and purpose in life. Education, she said, should also inculcate patriotism and the intent to serve society among students. 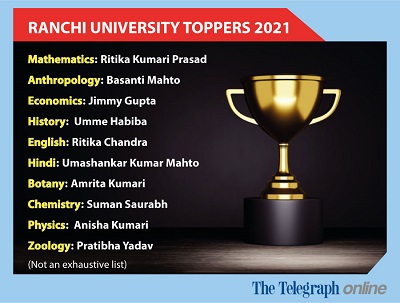 While the toppers were excited to get gold medals from the VC and Pro VC, some of them claimed that getting medals at the convocation ground in presence of family and friends would have been more satisfying.

“I am happy that we at least had a convocation ceremony where we could get our medals and certificates. However, this cannot match the thrill and enthusiasm associated with getting awarded in presence of our near and dear ones at a huge gathering of several hundred people,” said Saurav Munda, the topper of Masters in Mass Communication.

The decision of keeping the convocation ceremony a low-key affair was taken in the wake of rising Covid-19 cases in the state capital. Certificates and medals were given to PG students of 2018-2020 batch and undergraduate students of 2017-2020 batch on Monday.