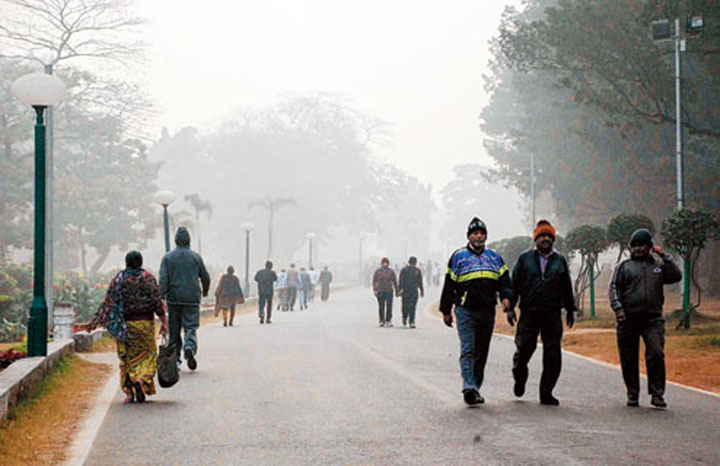 In Jamshedpur, too, the Celsius has been on a plummeting spree. The local observatory on Wednesday recorded a minimum of 14.6°C against Tuesday’s 17.2°C. The reading on Wednesday was three notches below the average normal.
Telegraph file picture
Our Special Correspondent   |   Jamshedpdur   |   Published 18.12.19, 09:21 PM

The prevailing cold wave in northern India has made way for the return of the morning chill in Jharkhand.

The dry and crisp north-westerly wind that is sweeping across the state has dragged down minimum temperatures below the 10°C mark in several places, including state capital Ranchi, and has ensured another 48 hours of bone-numbing chill.

Weathermen at the Ranchi centre of the India Meteorological Department on Wednesday predicted a drop of at least three degrees in minimum temperature in the next two days.

Besides the capital and Khunti , places such as Bokaro and its adjoining areas had a brush with the sub-10 jitters for the first time this winter.

Ranchi on Wednesday recorded a minimum reading of 8.6°C, one point below the average normal. On Tuesday, it was cosier at 14.6°C, which means the temperature plunged by six degrees in just 24 hours.

Kanke on the outskirts of the capital, which usually touches temperatures close to the freezing point in December, recorded a minimum of 9.6°C on Wednesday.

The mercury plungedto 10.5°C in Bokaro from 16.1°C on Tuesday, two points below normal.

In Jamshedpur, too, the Celsius has been on a plummeting spree. The local observatory on Wednesday recorded a minimum of 14.6°C against Tuesday’s 17.2°C. The reading on Wednesday was three notches below the average normal. Weathermen said a further fall in minimum reading was expected in the steel city in the next 48 hours.

The night temperature in Daltonganj nose-dived to 11.9°C from Tuesday’s 17°C, Wednesday’s reading being three notches below normal.

Chaibasa in West Singhbhum also witnessed the Celsius sliding to 12.8° from 16.6°, two notches below normal.

Early morning fog was witnessed in southern and central Jharkhand, including Jamshedpur.

Forecast of shallow and moderate fog in the state has been extended for another 48 hours.“The current spell of cold wave sweeping northern India has given fresh momentum to north wind. This is causing the Celsius slide in Jharkhand. Such weather is likely to prevail for a few days,” said S.D. Kotal, director of the Ranchi Met centre.