The morcha has held discussions with the Aituc, Intuc, SFI and social organisations for an all-India coordination committee 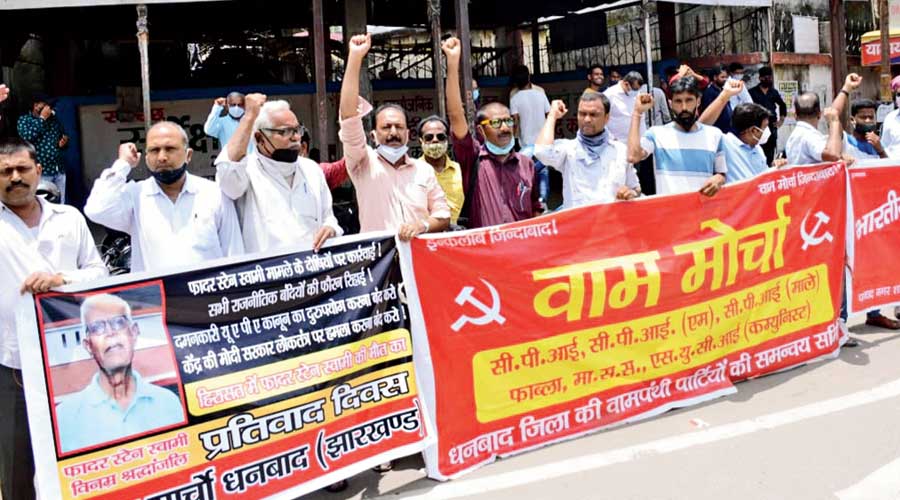 Trade unions, farmer unions, student unions and social organisations protesting against the death of Father Stan Swamy in judicial custody will form a coordination committee to submit memoranda to governors of different states for the repeal of the Unlawful Activities (Prevention) Act and release of rights activists arrested under the anti-terror law on allegedly flimsy grounds.

“We discussed with our comrades and friends in like-minded unions and social bodies on a joint move to exert pressure for repeal of draconian laws like the UAPA under which intellectuals, academics, writers and human rights activists have been languishing in jail without trial for years and elderly person like Father Stan had to die for lack of proper medical treatment in jail. State units will form coordination committees and submit memorandum to governors of their respective states demanding repeal of the UAPA,” said Jharkhand Aituc general secretary P.K. Ganguly.

“We will be submitting a memorandum to the Jharkhand governor (Ramesh Bais who will take charge on July 14) on July 15 demanding repeal of the UAPA, judicial probe into the custodial murder of 84-year-old Fr Stan, besides drawing attention to the rising fuel prices. The state committees will finalise their own dates and draw up memoranda for submission to their respective governors. The common point would be repeal of the UAPA and release of all those persons jailed under this act for long periods without trial,” said Praful Linda, CPM leader and president of the Jharkhand Rajya Kisan Sangharsh Samanvyay Samity.