They will take out a silent march to the Raj Bhavan on July 15 under the banner of the newly formed outfit, Shahid Father Stan Swamy Nyayik Sangarsh Morcha 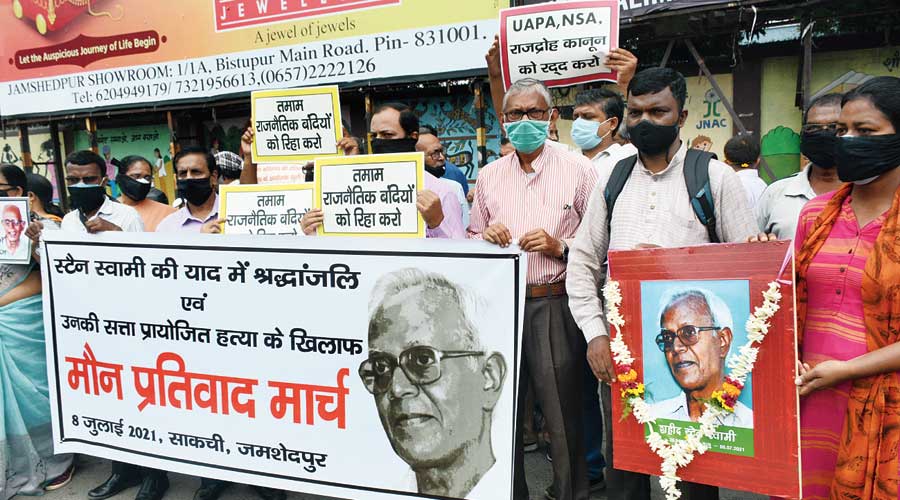 Social groups, academics and political activists stage a dharna at Sakchi in Jamshedpur on July 8 to protest against the death of Father Stan Swamy
Bhola Prasad
Animesh Bisoee   |   Jamshedpur   |   Published 13.07.21, 02:07 AM

Fr Stan, 84, died in judicial custody on July 5 while awaiting bail in Mumbai. The Jesuit priest and tribal rights activist was an accused in the Elgaar Parishad-Maoist links case.

The trade unions, non-BJP political parties and civil society organisations will take out a silent march to the Raj Bhavan on July 15 under the banner of the newly formed outfit, Shahid Father Stan Swamy Nyayik Sangarsh Morcha.

“We formed this front on July 11 and are coordinating with trade unions, student unions, farmer unions, non-BJP political parties and civil society groups for the joint peace march on July 15. We will demand a judicial probe into the cause of death of Father Stan Swamy in custody. We will also attach reports of medical negligence faced by the 84-year-old man suffering from Parkinson’s disease and having other ailments, and not being sent for treatment despite showing Covid symptoms and finally testing positive at the hospital,” said Praful Linda, CPM leader and president of the Jharkhand Rajya Kisan Sangharsh Samanvyay Samity.

The Samity was formed last year to coordinate the farmers’ agitation in Jharkhand against the Centre’s new farm laws.

Fr Stan had sought bail four times citing his failing health and the poor medical facilities at the Taloja jail, where he had been kept since October 9, 2020, after his arrest from his Bagaicha residence in Namkum near Ranchi the previous day by the National Investigation Agency.

“Fr Stan was not even treated by an MBBS doctor in the jail. We have been told that an Ayurveda doctor was looking after him. He was even administered the vaccine despite showing Covid symptoms and eventually tested positive at the Holy Family Hospital.

Fr Stan was not taken for an RT-PCR test despite several jail inmates testing positive for Covid in May. All these things led to the deterioration of his health. We would want all these things to come out in an independent judicial probe so that the guilty are punished,” said Linda.

Leaders of the Aituc, Intuc and Citu and those from the JMM, Congress, RJD, CPM and the CPI, along with several social organisations, have shown keenness to take part in the rally.

Aloka Kujur, another member of the Morcha, said the outfit would also seek “martyr” status for Fr Stan from Jharkhand chief minister Hemant Soren when he visits Bagaicha to pay his last respects on July 15.

Father Jerome Cutinha, Provincial of the Jamshedpur Jesuit province, confirmed that Soren would pay his last respects to Fr Stan on July 15.

“The ashes will be kept at Bagaicha on July 15 morning for the masses to pay their last respects to Fr Stan. We have got confirmation that chief minister Hemant Soren will also be coming to pay his last respects on that day. Some of our members too will take part in the march on July 15,” said Fr Cutinha.

Fr Stan’s ashes will be interred in the first week of August in Jamshedpur.