FIR lodged, many detained; internet services suspended in many areas of Jharkhand capital 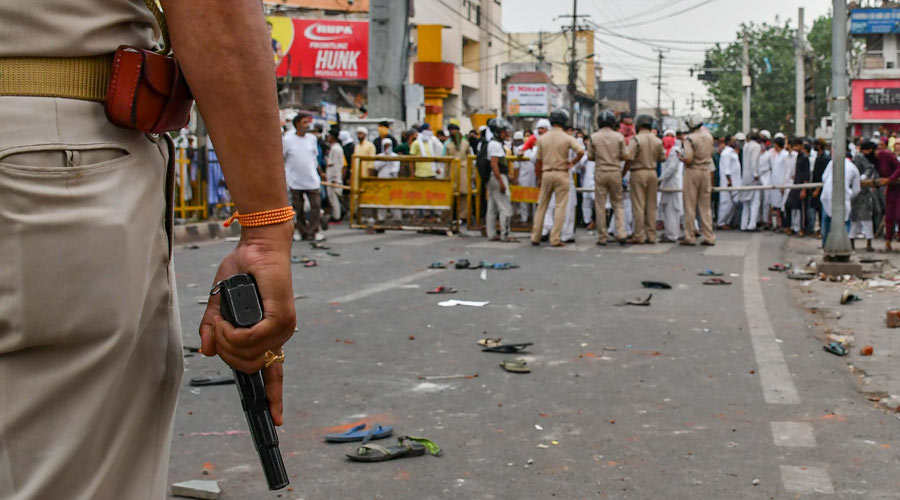 Jharkhand's capital Ranchi has been blanketed by heavy police cover as two persons succumbed to gunshot wounds sustained during Friday's protest against controversial remarks on Prophet Mohammad by suspended BJP spokespersons as Hindutva outfits called for a bandh on Saturday against the violence.

"Twelve policemen and 12 others have been injured in the violence. One policeman has sustained bullet injuries. The funeral of the two deceased will take place during the day. Internet services will remain suspended till the situation normalises.

"An FIR has been registered and some people have been detained. We are keeping a strict vigil on the situation," he said.

Two critically injured people were brought to state-run Rajendra Institute of Medical Sciences (RIMS) between 11.30 PM and midnight on Friday with bullet injuries and they died during the course of treatment, an official of the medical establishment said.

"One of the deceased, identified as Mohammad Mudassir Kaifi (22) had gunshot wounds on his head, while the other, identified as 24-year-old Mohammad Sahil, had received bullet injuries on his neck. Post-mortem reports stated that both died due to gunshot wounds. Both were residents of Ranchi," he said, adding that eight others are in the ICU.

Over two dozen people were injured in the clashes that rocked the state capital on Friday, officials said.

Thirteen of the critically injured people were admitted to RIMS, doctors there said.

"The injured include CRPF personnel and policemen," the RIMS official said.

Prohibitory orders under Section 144 of the CrPC have been clamped in 12 police station areas, including Sukhdev Nagar, Lower Bazar, Daily Market and Hindpidi, of Ranchi district besides Hazaribag and Ramgarh districts to prevent flareups, officials said.

Internet has also been suspended in Ranchi district, they added.

The situation is under control and is being monitored. CCTV footage and videos are being scrutinised, the officials said.

Besides head, he also received injuries in other parts of his body after he was hit by stones, they said.

Some Hindutva outfits have called for a Ranchi bandh on Saturday, asking traders to keep their shops shut in protest against the violence.

"We have called for a peaceful Ranchi bandh today against yesterday's incident. All Hindu religious organisations such as VHP, Hindu Jagaran Manch and others have extended their support to the bandh call," Mahavir Mandal president Ashok Purohit told PTI.

He said traders have been urged to shut their shops voluntarily.

"We will not take to the streets to enforce bandh. Since morning, we are witnessing huge support from traders to our bandh call," Purohit said.

The violent protesters have been demanding the arrest of suspended BJP spokespersons Nupur Sharma and Naveen Jindal for their controversial remarks on Prophet Mohammad.

Muslims held mostly peaceful protests outside mosques after Friday prayers in several parts of India, calling for quick prosecution of the now-suspended BJP spokespersons. Apart from Ranchi, clashes between protesters and police also  occurred at Allahabad and Bhaderwah town of Jammu.

A small group held placards and chanted slogans outside Jama Masjid in Delhi, with neighbourhood residents joining in. The police persuaded the crowd of about 300 to disperse — after continuous TV coverage of alleged communal tension in the area —and said action would be taken against those protesting without permission.

Ahmed Bukhari, the Shahi Imam of the mosque, told reporters: “I don’t know who these protesters were. They do not have our permission, nor has anything been discussed. We discourage people from doing politics on this issue.”

Varanasi — home to the Gyanvapi mosque, the subject of a controversy that triggered Sharma’s remarks — remained peaceful. The mosque management had appealed to people to offer Friday prayers at any mosque near their home and ignore rumours. As a result, only about 20 people offered prayers at the Gyanvapi.

Protests were reported from many places in Uttar Pradesh, Rajasthan, Maharashtra, Telangana and Jammu and Kashmir. Central forces were deployed in several places although most of the demonstrations were peaceful.